‘Stop looking at these kids as heroes,’ says veteran who made documentary featuring wartime footage of Marines 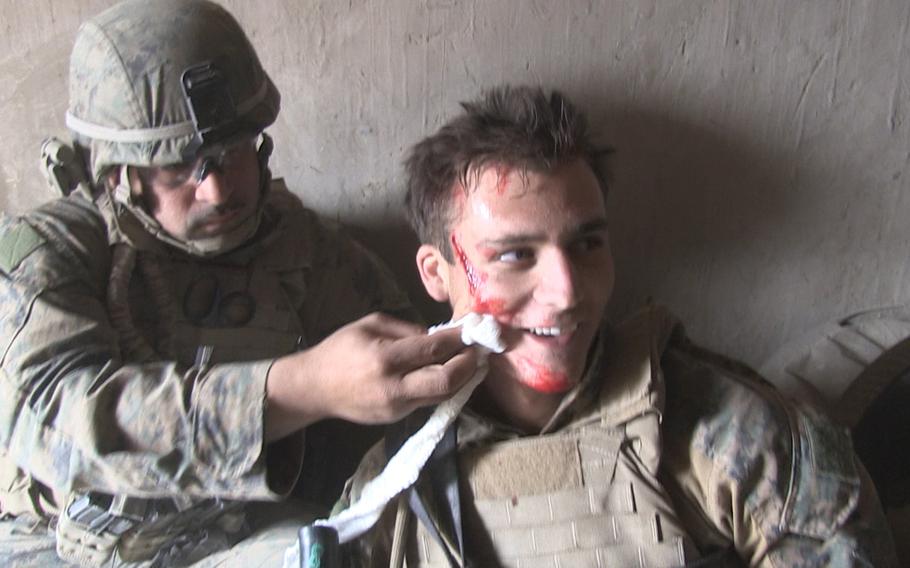 A U.S. Marine receives treatment for shrapnel wounds sustained during a firefight in southern Afghanistan during his 2011-12 deployment. (Courtesy of Oscilloscope Laboratories)

A U.S. Marine receives treatment for shrapnel wounds sustained during a firefight in southern Afghanistan during his 2011-12 deployment. (Courtesy of Oscilloscope Laboratories) 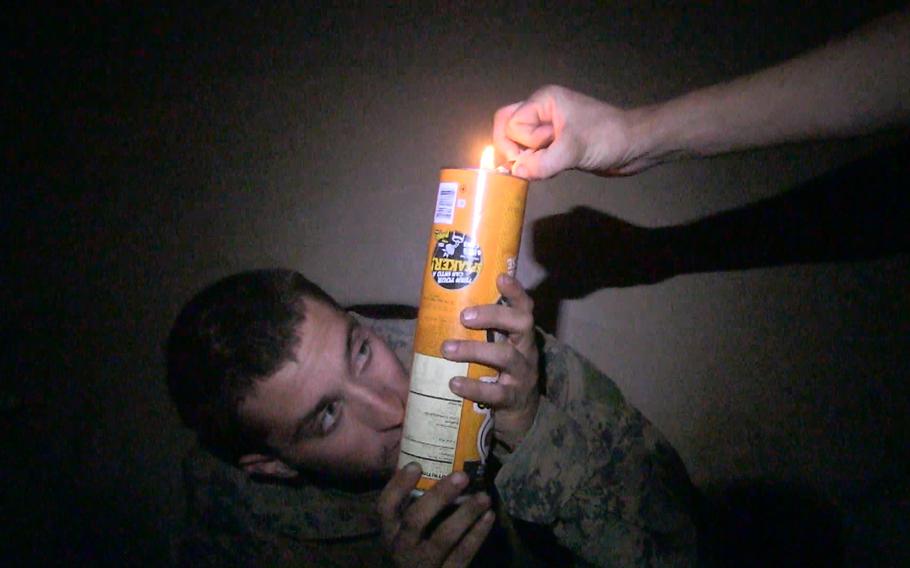 In a still from ''Combat Obscura,'' a film that uses footage shot in Afghanistan by a Marine, a U.S Marine appears to smoke marijuana out of a makeshift bong while deployed to Afghanistan in 2011-12. (Courtesy of Oscilloscope Laboratories) 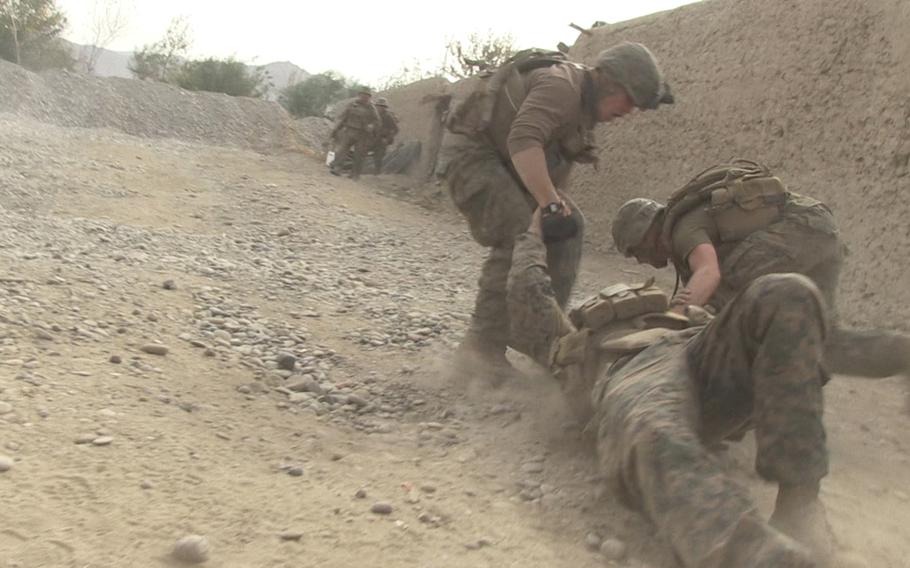 In a still from ''Combat Obscura,'' a film that uses footage shot in Afghanistan by a Marine, two marines help a fellow servicemember wounded in a firefight in Helmand province sometime during their 2011 to 2012 deployment. (Courtesy of Oscilloscope Laboratories) 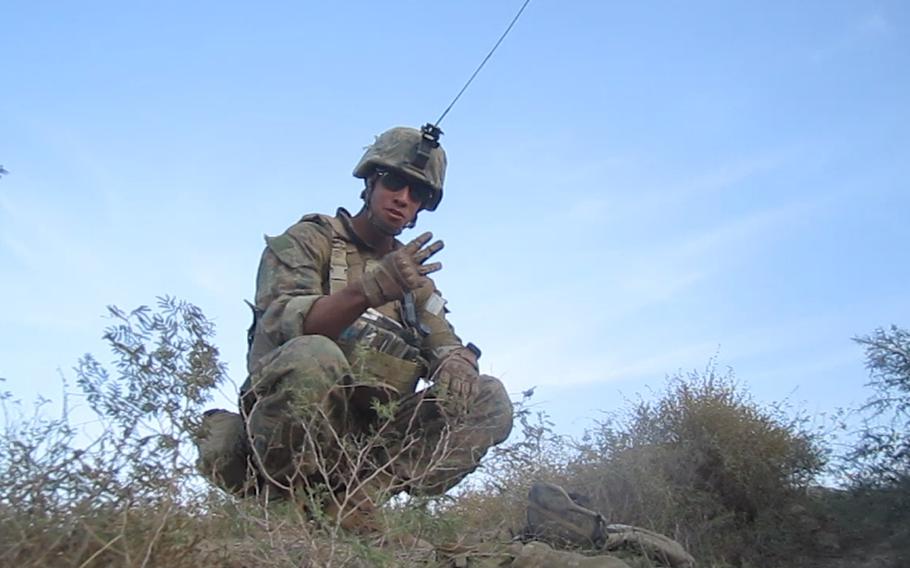 A still from ''Combat Obscura,'' a film that uses footage shot in Afghanistan by a Marine and shows some controversial scenes. (Courtesy of Oscilloscope Laboratories) 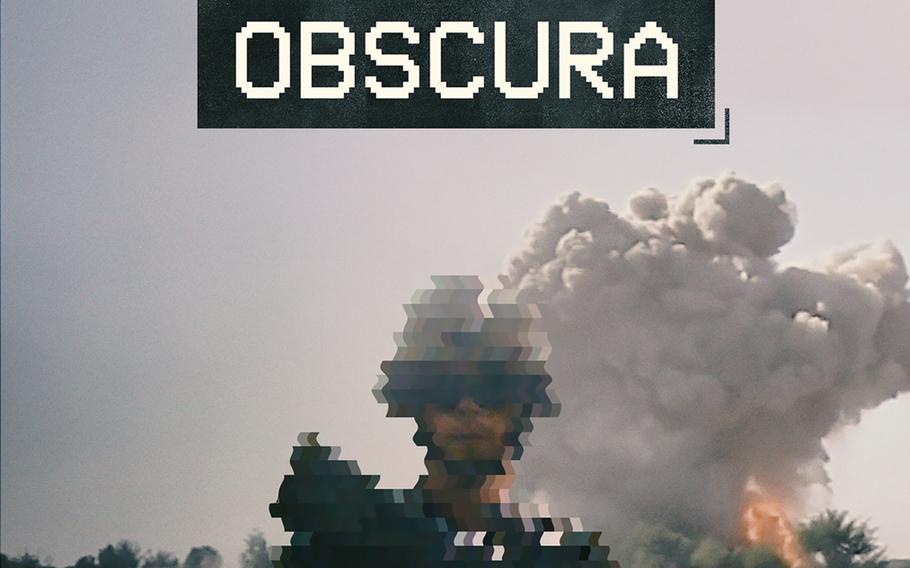 The poster for ''Combat Obscura,'' a film that uses footage shot in Afghanistan by a Marine and shows some controversial scenes. (Courtesy of Oscilloscope Laboratories)

KABUL, Afghanistan — Former Marine Miles Lagoze hopes his film “Combat Obscura” will alter the “sanitized and sanctified view of the military” many Americans hold by showing them his view of what combat is actually like.

“It’s important because if you worship the military too much, you lose track of why we’re actually at war and the underlying issues that are causing it,” Lagoze told Stars and Stripes during a phone interview before the film’s release on Friday.

The documentary — a patchwork of scenes showing Marines smoking marijuana while on patrol in Afghanistan, defecating outside the homes of locals, swearing at children and talking lightly of killing innocent people — goes far to challenge the ubiquitous label of “hero” frequently bestowed on American servicemembers.

The cultural insensitivity on display may also give viewers the feeling that they’re getting an explanation, or at least part of one, as to why America’s longest war — now in its 18th year — hasn’t been won.

Footage used in the film was taken by Lagoze, then a lance corporal, and other combat cameramen during a deployment to Helmand province with the 1st Battalion, 6th Marine Regiment between 2011 and 2012.

Lagoze’s job as a combat cameraman was to shoot and edit video of Marines at war. After being approved by the military, the footage was distributed to private news networks and the American Forces Network.

A video Lagoze shot of a November 2011 attack on Patrol Base Georgetown in Helmand’s Kajaki Sofla was picked up by CNN that winter and billed as a “rare, firsthand glimpse into a battle with the Taliban” and an “unfiltered look” at the war.

The video shows a platoon taking indirect fire, 30 mm grenades and sniper fire. They’re still beating back the attackers when they have to coordinate a medical evacuation for a wounded comrade.

The 5-minute video, one of several of his the Pentagon publicly shared on its own websites, earned Lagoze a first place prize for combat documentary in the 2011 Visual Information Awards Program run by the military’s public affairs school. But the hourlong “Combat Obscura” includes footage the Marine Corps never approved for release.

“We filmed what they wanted, but then we kept shooting,” text at the beginning of the film reads. Its website calls it the “documentary the Corps does not want you to see.”

Initial threats of legal action by the Marine Corps against Lagoze for using footage apparently shot on government equipment substantiate that claim.

Previously, Lagoze said he hadn’t considered making the material into a full-length documentary until after he enrolled in film school at Columbia University and realized what he had.

Working with the Knight First Amendment Institute at the school, he pushed back against the military’s threats, a Columbia University statement said.

After a preliminary inquiry by the Naval Criminal Investigation Service, military officials have decided not to pursue litigation against Lagoze or any of those depicted in the film “at this time,” said Marine spokesman Maj. Brian Block in an emailed statement.

“The potentially criminal activity captured ... is inexcusable and selfish and endangered the security of the Marines in that unit,” Block said. “Unfortunately, the statute of limitations for pursuing disciplinary action has passed.”

That activity includes Marines apparently smoking pot in several scenes, including one in which a Marine appears to be rolling a joint in front of Afghan children and his colleague jokes about marrying an underage girl.

The speaker is the only person in the film who asked to have his face blurred, according to Lagoze, who said most of the men in the movie were happy for the public to see what their combat experience was actually like.

“I think ... veterans of this war are at a point where we’re sick of the hero worshiping and the sugarcoating of the experience and a lot of us are sick of people saying, ‘thank you for your service,’ without actually getting in a real conversion about what we did and what happened,” Lagoze said.

Distributed by Oscilloscope Laboratories, the film is being released in a small number of theaters and became available to buy or rent on iTunes on Friday.

While images of Marines smoking marijuana and swearing will be seen as a blemish by some on the branch’s image, other scenes in the film are more disturbing and consequential.

“I don’t care right now about their customs or their courtesies,” a Marine says in one part of the film before his men interrupt a religious service at a rural compound. After detaining the men there for what appears to be several hours, it’s revealed the “high-value individuals” being sought are not there.

In another scene, a patrol arrives to examine the body of a suspected Taliban fighter who has been shot dead. “Just like a deer,” one Marine says of the corpse as others talk to the lifeless body. The group quickly realizes the man was an unarmed shopkeeper.

The Marines discuss covering up the killing as the man’s body is shown being wrapped in a carpet, with one saying, “This is no good for people to see.”

Due to a lack of narration giving context to the raw footage, it’s often unclear exactly what is happening during the seemingly arbitrary assortment of scenes. But as the film progresses, a sense of the troops’ insensitivity and hubris becomes palpable.

The Marines in the film appear unsuited to the counterinsurgency strategy that U.S. commanders were pursuing at the time, focused on winning the trust of the Afghans.

“The behavior and actions depicted in this film do not live up to the high standards we expect of our Marines and do not represent the experience or attitudes of the vast majority of Marines who deploy and served with honor and distinction in Afghanistan,” said Block, the spokesman.

Lagoze admitted that “there are a lot of different types of guys in the military,” but that his film is an accurate experience of his deployment to Afghanistan as a 21-year-old, seven years ago.