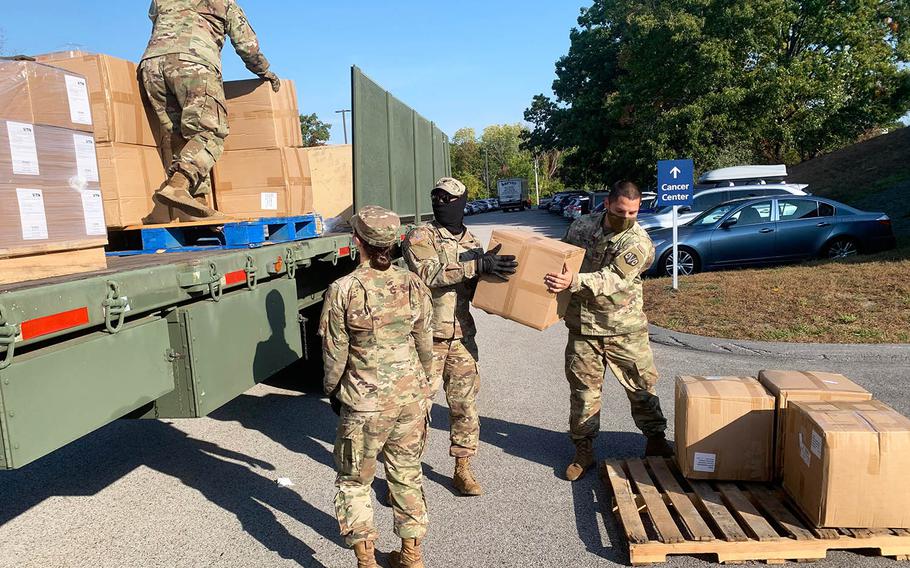 AUSTIN, Texas – Massachusetts on Monday joined a growing number of states readying National Guard troops for possible protests in the wake of Election Day. Gov. Charles Baker put 1,000 members of the commonwealth’s National Guard on standby should they be needed to ensure public safety in case protests following Election Day, according to a news release from state safety and security officials. Baker, a Republican, issued an executive order that makes 1,000 troops available “in the event their assistance is requested by local officials to maintain public safety or protect opportunities to exercise First Amendment rights during large-scale events,” the Massachusetts officials said. “There is no indication of any public safety risk in Massachusetts. Just as the administration does for all major events, we have made additional resources available should local leaders request them,” said Thomas Turco, the state’s public safety and security secretary. In the last week, more than 10 states have announced the use of Guard troops as Election Day approaches, mostly for missions related to voting, according to Wayne Hall, spokesman for the National Guard Bureau, which is located at the Pentagon. Precautions for possible protests related to Election Day follow a summer of civil unrest across the United States, marked by large demonstrations in many cities where protesters railed against racial injustice and called for political reform. In some cases, the protests turned violent. President Donald Trump’s repeated comments that large-scale, mail-in voting could lead to widespread fraud and taint election results could add further tension to a politically polarized nation. This has led many governors to prepare Guard troops to deploy should protests form – and turn violent -- on the streets of their states in the wake of Election Day. “The Oregon National Guard has units who are trained to support civilian law enforcement and now through the governor’s authorization,” said Maj. Stephen Bomar, spokesman for the Oregon National Guard. “These Guard members are available to support Oregon State Police should the need arise.” He did not give an exact number of troops. Texas has a reported 1,000 troops activated to protect government buildings and landmarks, according to the San Antonio Express-News. Officials at the Texas Military Department declined to answer questions and would not confirm the report. Earlier this year, the National Guard Bureau created a 600-soldier, quick-response unit of mostly military police, split up between Alabama and Arizona, The Washington Post reported. Those troops could mobilize in other states or in Washington, D.C. The Post also reported Illinois is readying troops to respond if needed, “but have not been given any missions,” said Army Lt. Col. Bradford Leighton, a spokesman for the Illinois National Guard. Meanwhile, Wisconsin announced about 400 troops will work Tuesday as poll workers, as will about 280 in Kentucky. New Jersey National Guard sent 370 troops to 19 counties to help process mail-in ballots, said Army Lt. Col. Barbara Brown, spokeswoman for the state’s Guard. New Jersey also is “postured to have a reaction force to assist the state for contingency responses when requested by proper authorities,” Brown said. “The Guard has a long-standing state partnership with civilian and law enforcement authorities to help ensure a rapid and unified response.” National Guard officials in Illinois, Tennessee, Washington state, West Virginia, North Carolina, Colorado and Pennsylvania have said they provided a small number of troops for cyber security and network monitoring. “This cyber defense support is a perfect example of how the training and resources we receive for our warfighting mission directly informs our homeland response capability,” said Army Brig. Gen. Laura Clellan, adjutant general of Colorado. “Our cyber teams are always ready, always there for both state and federal missions.” In Pennsylvania, this is the fifth election in a row where the Guard has contributed to cyber security assistance, said Lt. Col. Keith Hickox, spokesman for the Pennsylvania National Guard. Pennsylvania does have troops in Philadelphia for an ongoing mission to respond to protests after police fatally shot a 27-year-old man Oct. 23. The mission is not related to the election, Hickox said. Thayer.rose@stripes.com Twitter: @Rose_Lori