‘State of readiness:’ Governors across the country place National Guard troops on standby for election aftermath 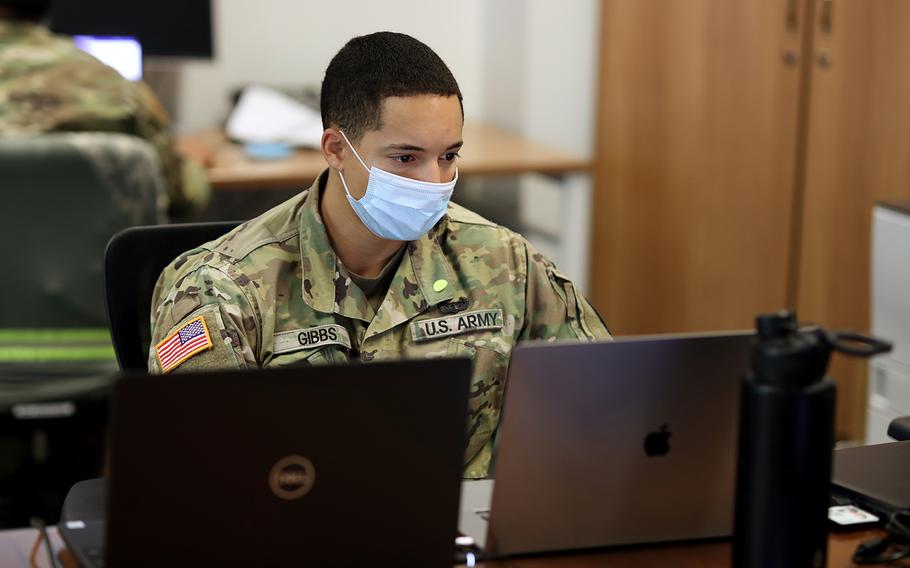 Sgt. Micheal Gibbs, a cybersecurity analyst with the North Carolina Army National Guard's 883rd Combat Engineer Company, monitors networks Nov. 2, 2020, while assisting the Cyber Security Response Force in their support of the State Board of Elections prior to the 2020 Presidential Election. (Mary Junell/North Carolina National Guard)

Sgt. Micheal Gibbs, a cybersecurity analyst with the North Carolina Army National Guard's 883rd Combat Engineer Company, monitors networks Nov. 2, 2020, while assisting the Cyber Security Response Force in their support of the State Board of Elections prior to the 2020 Presidential Election. (Mary Junell/North Carolina National Guard) 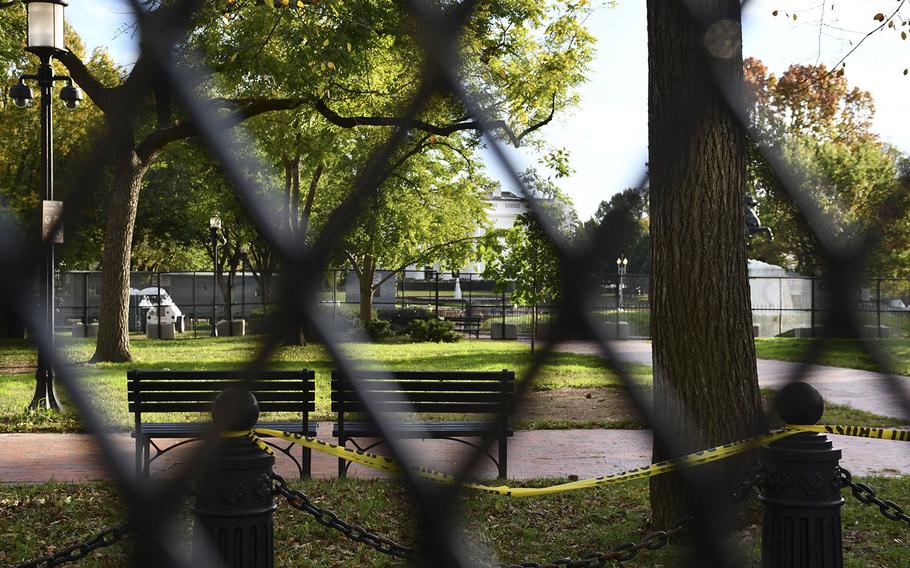 Buy Photo
Lafayette Park, in front of the White House, is fenced off on Nov. 3, 2020. (Nikki Wentling/Stars and Stripes) Buy Photo
The Department of Veterans Affairs headquarters building in Washington, D.C. is boarded up on Nov. 3, 2020, as protection against any unrest resulting from the election. (Nikki Wentling/Stars and Stripes)

AUSTIN, Texas — A nonscalable fence around the White House and boarded-up storefronts are signs of the tension surrounding Election Day and the fear that some Americans will react to voting results with protests, riots and violence that could spur the deployment of National Guard troops.

“We are hopeful, as are most Illinoisans and Americans, that we will not be needed and will not have any missions, but better to be there and ready,” said Lt. Col. Brad Leighton, spokesman for the Illinois National Guard.

In Massachusetts, Gov. Charles Baker announced an executive order Monday to allow up to 1,000 troops available to support local law enforcement agencies in the state, though most officials have declined to discuss exact numbers.

In Florida, Gov. Ron DeSantis ordered soldiers to be positioned “in several locations across the state, standing by to assist local law enforcement and their communities as needed,” said Lt. Col. Caitlin Brown, spokeswoman for the Florida National Guard.

Guard preparations for possible Election Day protests follow a summer of civil unrest across the U.S., marked by large demonstrations in many cities where protesters railed against racial injustice and called for political reform. In some cases, the protests turned violent.

President Donald Trump’s repeated comments that large-scale, mail-in voting could lead to widespread fraud and could taint the election also has fueled fear that protests could erupt once results are revealed.

That has led many governors to prepare Guard troops to deploy should protests form — and turn violent — in the wake of Election Day.

In Illinois, some residents became alarmed Monday after seeing military vehicles and troops traveling to Chicago.

“We sometimes forget how scary troops and military trucks can be for those who are unaccustomed to seeing them,” the Illinois National Guard posted on Facebook. “It is kind of Military Operational Security 101 not to talk about troop movements ahead of time.”

Troops from the Illinois Guard are in “a state of readiness” and troops are activated now so they can respond quickly, if needed, Leighton said.

Troops in Texas have remained on the job since the summer, when many states sent uniformed Guard members into the streets for protests that sometimes turned violent or destructive following the death of George Floyd, who was killed while being detained by Minneapolis police. Those Texas troops are supporting the Department of Public Safety to protect historical landmarks, according to the Texas Military Department.

While officials declined to answer questions about numbers of troops, there could be up to 1,000 Texas Guard members activated for the mission, the San Antonio Express-News reported.

In response to the protests during the summer, the National Guard Bureau created a rapid response force comprising mostly military police soldiers in the Arizona and Alabama National Guards.

“When people see the National Guard, they know we’re here to help,” Army Gen. Daniel Hokanson, National Guard Bureau chief, said of the force. “Our goal is to protect the people and property in the communities where we live and serve.”

Each state contributes about 300 service members to the force and all have been on standby since September, according to Guard officials. Arizona did send some troops to Wisconsin earlier this year, said Maj. Kyle Key, spokesman for the Arizona National Guard.

“Year-round, [military police] receive annual civil disturbance training that focuses on peaceful and nonlethal deescalation techniques, tactics, and procedures,” he said. “If requested … the Arizona National Guard is ready to respond when needed.”

While most troops on standby in those states are awaiting missions, about 1,200 troops in at least 10 states are activated and are working at polling locations or as cybersecurity experts on Election Day to support states and counties. These service members in public-facing support roles typically wear civilian clothes.

In New Jersey, where 370 troops are helping process mail-in ballots, officials see the election help as an extension of their ongoing fight against the spread of coronavirus, said Lt. Col. Barbara Brown.

“We live, work and raise families in these communities and will stay during this critical time for as long as we are needed,” she said.