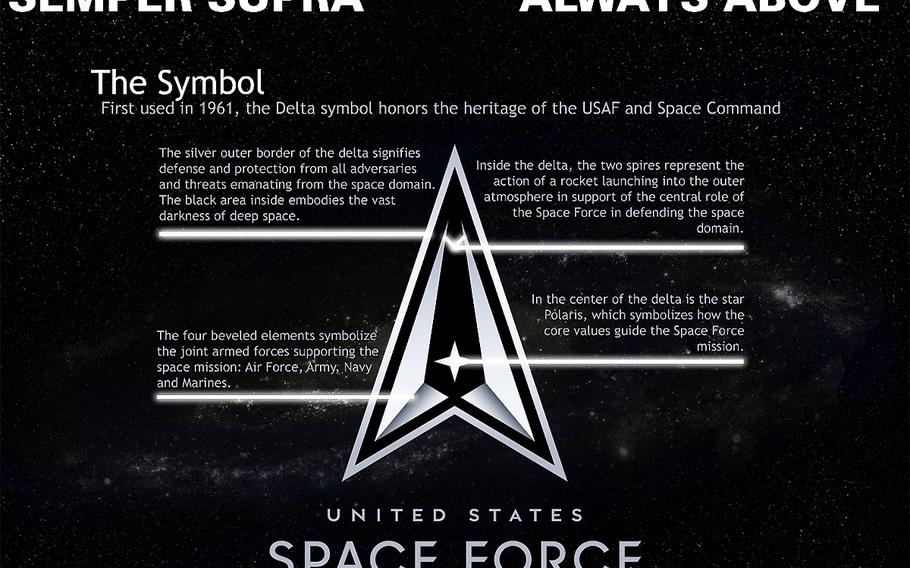 The official motto for the military branch charged with safeguarding American satellites means “always above” in Latin, and is meant to represent the role of Space Force in “establishing, maintaining and preserving U.S. freedom of operations” in space, the service tweeted.

“We are building a new service to secure the space domain... the ultimate high ground,” Gen. Jay Raymond, the chief of space operations, tweeted Wednesday. “Our strategic imperative is to ensure that our space capabilities & the advantages they provide the nation & our joint and coalition partners are always there. #SemperSupra!”

The motto is the latest unveiling for the Space Force, which was established in December and will see its first large movement of new troops into the branch in February, when about 2,410 Air Force airmen working in space operations transfer. The service now boasts just 88 official members — Raymond, his senior enlisted adviser and 86 second lieutenants commissioned into the service after graduating from the Air Force Academy in April.

The service has previously unveiled its camouflage utility uniforms, its official seal, its service flag, the jobs its troops will perform and its first recruiting video. It has yet to identify what Space Force troops will be called, an official song, dress uniforms or a rank structure. However, a measure within the fiscal year 2021 National Defense Authorization Act approved by House lawmakers on Tuesday would force the service to adopt the Navy’s rank structure, if signed into law.

The Space Force on Tuesday also tweeted explanations for the service’s new logo, which features a silver delta symbol surrounding a star representing Polaris against a black background.

The black symbolizes the “darkness of deep space,” while the delta’s outer border “signifies defense and protection from all adversaries and threats emanating from the space domain,” according to a graphic shared by the service.

The delta symbol has already been featured prominently in Space Force symbology. It is the most prominent feature on the service’s official seal and flag. Critics were quick to compare the symbols to those of Star Trek’s Starfleet. But Space Force officials noted the delta symbol has long been used by U.S. military forces, and has been an official symbol of the Air Force’s space operators since 1961.

The service is expected to grow to some 16,000 service members in the coming years. Officials said last week they expect to begin transferring some space-focused troops from military services outside the Air Force in 2022 at the earliest.