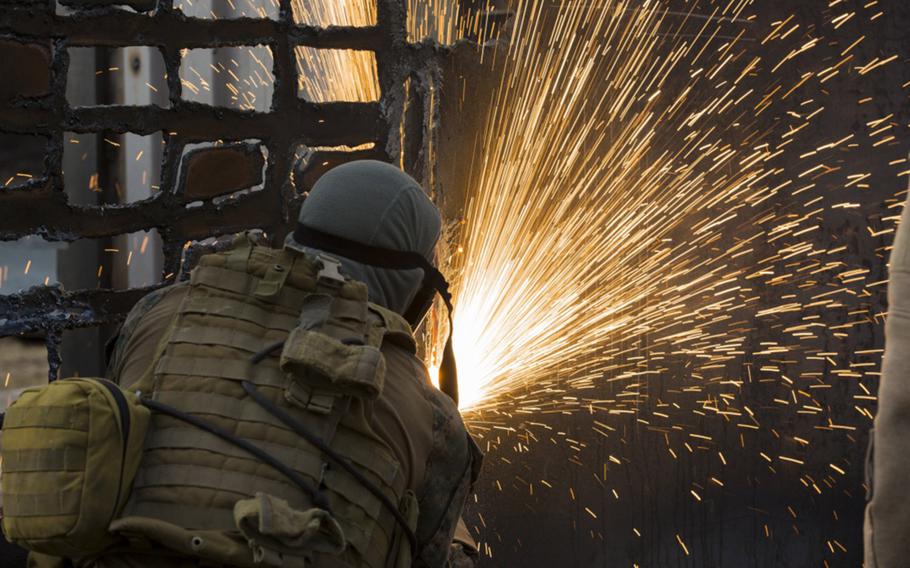 A U.S. Marine uses a torch to cut through steel aboard Camp Upshur, Quantico Va., Jan. 25, 2018. Vast quantities of the metals are used by the military to construct and repair ships, tanks to aircraft. (Shannon Doherty/U.S. Marine Corps )

President Donald Trump announced a 25 percent tariff on imported steel and 10 percent on aluminum this month, sparking fears of a trade war with China that could harm the global economy.

Vast quantities of the metals are used by the United States’ military industrial complex to construct everything from tanks to aircraft. The administration cited the need to protect that supply as a reason for imposing the tariffs.

“[The Defense Department] believes that the systematic use of unfair trade practices to intentionally erode our innovation and manufacturing industrial base poses a risk to our national security,” Defense Secretary Jim Mattis wrote in a memo to Commerce Secretary Wilbur Ross released last week.

China, in two filings with the World Trade Organization Monday, dismissed the idea that the tariffs are national security measures, arguing that they’re really aimed at protecting U.S. producers.

That view is backed by some U.S. defense experts.

Arizona State University engineering professor Braden Allenby says defense needs are only a small part of U.S. steel and aluminum consumption and trusted supplies from Canada, which for the time being is exempt from the tariffs, and U.S. steel producers that are already profitable undercut the national security argument.

“Despite a lot of rhetoric about China, which does have substantial overcapacity in both steel and aluminum production, the main U.S. supplier of both aluminum and steel is Canada, which is an ally,” he said.

The Trump administration has said that tariff exemptions for Canada and Mexico aren’t open-ended and depend on North American Free Trade Agreement negotiations.

Allenby said any gain in national security that tariffs might achieve would probably be swamped by the economic impact of retaliation by other countries on other sectors of the economy.

The cost of the tariff to manufacturers of automobiles, infrastructure and home appliances would likely outweigh any gain for U.S. steel and aluminum producers, he added.

Meanwhile, a trade war would have enormous short- and long-term effects on the U.S. economy, Allenby said.

“There is so much steel in the world that I doubt it could be a significant national security concern in time of war, given how much is made by U.S. allies,” said Michael O’Hanlon, a senior fellow at the Brookings Institution, a prestigious Washington-based think tank.

There’s an argument for ensuring a modest domestic supply of the metals but an across-the-board tariff probably isn’t a good way to achieve that and could reward inefficiency and drive up prices for goods made of steel, ultimately hurting U.S. competitiveness in ways that could have national security implications, he said.

A much lower tariff on government steel purchases to retain basic production capacity could be options but it’s unclear if even those steps are needed, O’Hanlon said.

Steel and aluminum aren’t the only minerals the government considers important for defense.

On March 19, the Department of the Interior closed public comments on a draft list of minerals “considered critical to the economic and national security of the United States.”

The list includes 35 minerals used in almost all sectors of the economy, such as the platinum group metals used for catalytic agents; rare earth elements used in batteries and electronics; tin used as protective coatings; and titanium used as a white pigment or as a metal alloy, the department said in a statement.

Allenby said rare earth minerals are critical to national security but that the U.S. has ample reserves to tap in a crisis.

“The real question … [is] how rapidly can alternative supplies be brought to market in a crisis … and what sort of economic maneuvering is necessary to try to maintain adequate and diverse supplies,” he said.

China has used low pricing to drive other producers of rare earth minerals from the market, and then used its position as sole global supplier to try to badger Japan to take pro-Chinese geopolitical positions, Allenby said.

“Even in that case the question was one of ramping up mining and processing to provide alternative sources, rather than an absolute scarcity of the materials,” he said.