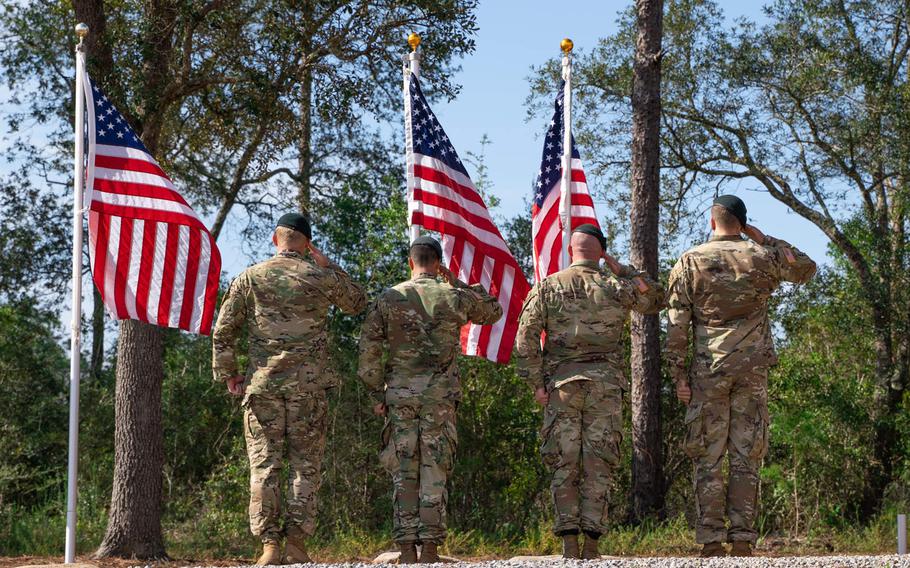 A Silver Star Medal certificate and three of the medals, along with a challenge coin and other medals awarded on Aug. 21, 2020, at a ceremony at Eglin Air Force Base, Fla., recognizing acts of combat bravery during the six-month deployment of 1st Battalion, 7th Special Forces Group (Airborne), in Afghanistan from July 2019 to January 2020. (Demetrysean Lewis/U.S. Army) Two Green Berets and an Air Force pararescueman were awarded Silver Stars for their heroism during a nearly eight-hour firefight last year after the Special Forces team “stumbled upon” an elite Taliban force in a small Afghan village.

The team was so close to the enemy fighters that they heard the sounds of their voices and of the safety handles on their hand grenades being released, 7th Special Forces Group (Airborne) officials said Wednesday. The Americans fought their way out and humped over a mile to safety.

Bronze Stars were awarded posthumously to Master Sgts. Luis Deleon-Figueroa and Jose Gonzalez, both of whom were mortally wounded in the close-quarters battle in Faryab province exactly one year earlier.

Their names and that of Sgt. 1st Class Michael J. Goble, a Green Beret killed in Afghanistan on Dec. 23, 2019, were inscribed on stones laid in the garden during the ceremony.

“The event is humbling,” Command Sgt. Maj. Brock Buddies, the top enlisted leader of 1st Battalion, 7th SFG(A), said in a statement. “Every year we remember the men and women of this formation, their legacy and acts of heroism.”

The 1st Battalion deployed from July 2019 through late January, officials said, and was awarded a Meritorious Unit Citation for applying pressure on the Taliban to “set the stage” for a peace settlement the group signed with the U.S. on Feb. 29. Since the signing, the insurgents have not attacked U.S. forces.

During the past year, the “Red Empire,” as 7th Group is known, suffered five fatalities while fighting in Afghanistan, including the three from 1st Battalion and two from 3rd Battalion — Sgts. 1st Class Javier Gutierrez and Antonio Rodriguez — the last two U.S. combat fatalities in the country this year, killed just weeks before the pact was signed.

One other American and an Afghan commando were wounded alongside Deleon-Figueroa and Gonzalez, 7th Group said in a synopsis of the August 2019 gun battle it provided to Stars and Stripes.

The team, also known as an Operational Detachment-Alpha, had been conducting operations against a different target when it came upon the Taliban force, it said. Provincial officials have said the battle occurred in Almar district, near Afghanistan’s northern border with Turkmenistan.

Amid the fighting that followed, all four of the wounded were medically evacuated by a helicopter that landed under enemy fire in a courtyard about half the size of a football field, “and within inches” of the other team members who eventually made their way out over ground the hard way.

“The ODA, who had lost contact with their supporting vehicles after the Taliban shot one of their radios, then fought their way out of the village and moved over a mile, by foot and under fire, to safety,” the synopsis said.

An ODA is typically made up of 12 Special Forces members of various specialties and is also known as an A-Team. Officials did not say how many Afghans accompanied them. Two other ODA members also earned Bronze Stars that day, but all names other than the three slain soldiers were withheld for security reasons.

The Bronze Star with “V” device for valor recognizes acts of heroism that do not rise to the level of a Silver Star, which is the third-highest medal for combat bravery and recognizes “exceptional gallantry” on the battlefield.

The Silver Stars were awarded to service members who braved enemy fire to “thwart the enemy attack” and who “undoubtedly saved the lives of team members” while risking their own during the harrowing August battle, officials said.

“The actions of the warriors we are recognizing today speak volumes about them as individuals,” said Lt. Gen. Francis Beaudette, commander of U.S. Army Special Operations Command, who presented the awards.

“They also clearly reflect the families and communities that shaped these men,” he was quoted saying during the closed event. “Even if they cannot be here physically — thank you for what your families do to support you every day.”