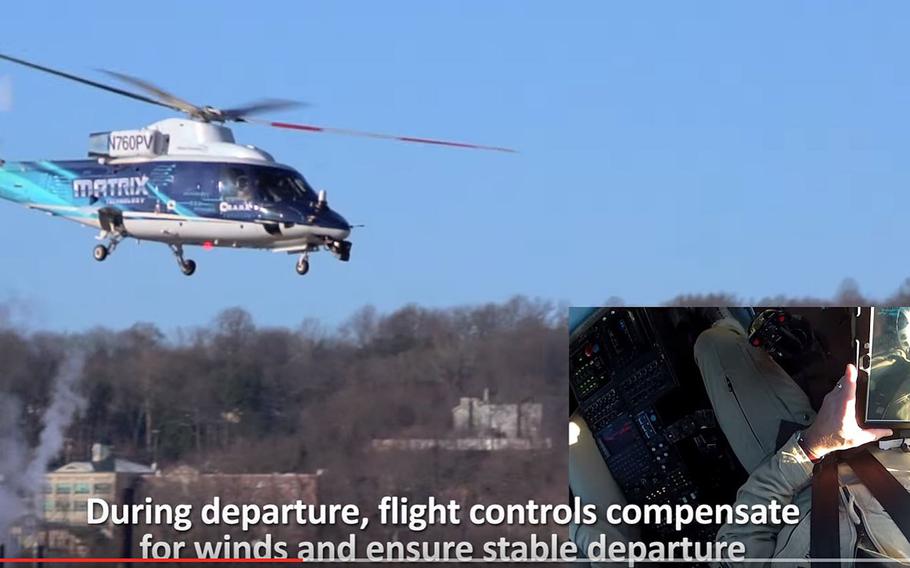 Screenshot of a Sikorsky S-76 helicopter in flight. Test pilots used a tablet to load the flight plan and initiate take-off, leaving system software to handle the flight controls and make adjustments. (Screenshot of YouTube video)

Here’s another use for your tablet device — piloting a helicopter.

Test pilots for Sikorsky recently used tablets to fly one of the firm’s S-76 commercial helicopters, part of a Pentagon look at installing autonomous, or self-piloting, systems into existing helicopter models.

The chopper flew from the company’s Stratford, Conn., facility to Robertson Airport in Plainville, Conn. — a distance of about 30 miles — in January, a press release from the firm said. Pilots used a tablet to load the flight plan and initiate take-off, leaving system software to handle the flight controls and make adjustments.

The test completes the $8 million first phase of an autonomous cockpit program run by the military’s Defense Advanced Research Projects Agency, or DARPA. Dubbed the Aircrew Labor In-Cockpit System, or ALIAS, program, it aims to fit autonomous systems into existing helicopter models such as the company’s UH-60 Black Hawk. Pilots and trainers would have the option of using the system instead of flying the aircraft manually.

In a video of the flight released by Sikorsky, a pilot is shown tapping a button on the tablet to initiate take-off. He repositions the aircraft by touching and dragging an icon and chooses a flight path by selecting a pre-loaded plan or entering a new plan. The autonomous system then adjusts flight controls to compensate for factors like wind.

“What Sikorsky and DARPA are demonstrating is the successful and affordable integration of advanced technology onto existing legacy aircraft to not only set the stage for autonomous operations down the road, but also to immediately improve aircraft performance, reduce maintenance costs, and increase crew and passenger safety,” Chris Van Buiten, Vice President of Sikorsky Innovations, said in the press release.

Sikorsky recently began the project’s second phase, funded at $9.8 million by DARPA, which aims to improve the system, known as Matrix Technology.

The DARPA program is part of the military’s broader interest in autonomous aircraft, ships and submarines. Designed to act without instruction from pilots, the vehicles can be deployed for longer periods of time and used in more dangerous situations or to reduce the risk of pilot error.