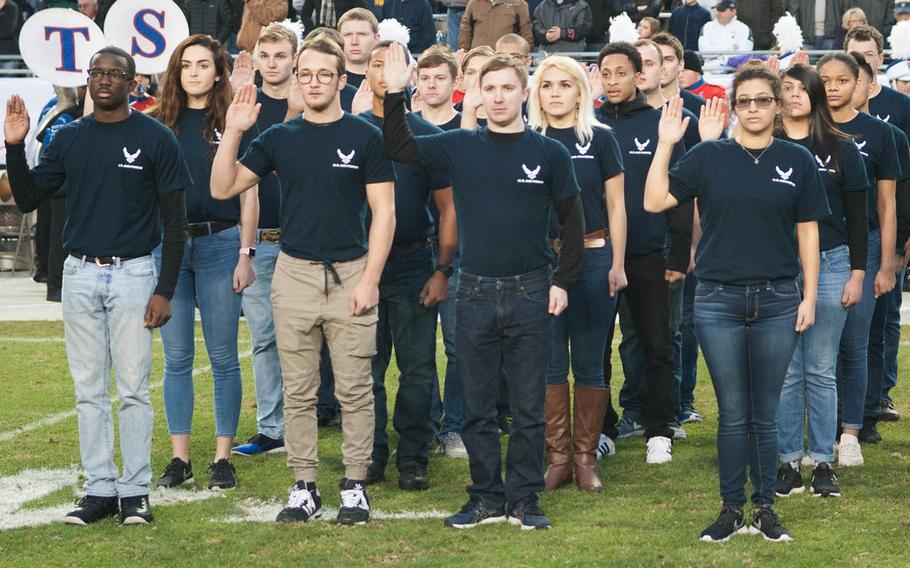 WASHINGTON — With obstacles to women serving in the military’s most dangerous, front-line combat jobs now eliminated, they should be required to register for the draft, former military leaders told a commission analyzing the U.S. Selective Service System.

It would be unconstitutional to continue to require men to register for the draft and exempt women, said Jill Hasday, a constitutional law professor at the University of Minnesota. Her stance on the issue matches the findings in February of a federal judge who ruled the current system violated the U.S. Constitution but stopped short of ordering its end.

But not everyone agrees that women should be made to register for the draft, a tool meant to supply the military with critical combat power in the time of a national wartime emergency, which has not been used since the Vietnam War.

That topic, long debated within the United States, was the subject of a hearing Thursday before the National Commission on Military, National and Public Service, an 11-member panel appointed by Congress to study the Selective Service program and make recommendations on its future.

The hearing was held just as President Donald Trump’s administration appealed the ruling in February by U.S. District Judge Gray Miller. In its appeal, the Justice Department called the potential for the court to order women to register “problematic.”

“It would impose draft registration on all eligible American women by judicial fiat before Congress has considered how to address the matter,” the Justice Department wrote. “No party before this court represents the interests of those who would be impacted by this change.”

Arguments against requiring women to register with the Selective Service raised Thursday by military veterans, scholars and others cited traditional gender roles and the higher rate of injury among female servicemembers. While others testifying before the commission argued women should not be forced to register and the entire Selective Service program ought to be scrapped completely, ending any potential for any Americans to be conscripted into military service.

The commission has spent months analyzing the U.S. draft policy — including the potential to include women in mandatory registration — as well as other national service programs.

It is expected to deliver its findings to Congress in a report to be released next year and recommend whether the Selective Service should continue to exist, whether women should be required to register and whether it should include non-military options, such as the Peace Corps.

Thus far, it has not made any determinations on those issues, according to Debra Wada, the commission’s vice chairwoman.

Women should not be drafted

Arguments in support of maintaining the status quo of the draft registration policy were raised by individuals who believe women are hard-wired to run families and raise children, as well as those suggesting women are more likely to suffer physical injuries.

Mark Coppenger, a professor of Christian philosophy and ethics at Southern Baptist Theological Seminary in Louisville, Ky., argued women should not be required to register for the draft because they should not be placed in a position where they could be forced to serve the nation when they could be raising a family. Coppenger, a retired infantry officer who served 28 years in the Army reserves beginning during the Vietnam War, said conscripting women into the military would go “against the order of nature.”

“We’re talking about consigning them to jobs outside of hearth and home,” he said. “I’m saying that women, in the prime years for bearing and raising children, should not be consigned by the state away from hearth and home … and this applies to all forms of compulsory public service, not just military duty.”

Among people arguing against including women in the draft on Thursday was Jude Eden, a former female Marine who served in combat operations in Fallujah, Iraq in 2005.

Eden said she joined the Marine Corps to fight in the War on Terror because it was “the tough branch.” She deployed as a network analyst, but accompanied infantrymen almost daily on convoys and at checkpoints to aid searches, often patting down Iraqi women in deference to the local culture.

Despite those experiences, she said she believes women do not belong in combat jobs, and further, she does not think women should have to register for the draft, because under current policy it is meant to supply the military with personnel to fill combat arms jobs.

“There are tons of roles in which women excel,” Eden told the panel, listing jobs including in intelligence and medicine. “But in the combat units, in particular, I think there’s more cons than pros [to including women.] There’s more damage that is caused by doing that, and it does diminish our combat effectiveness and it’s harmful to women.

“I don’t believe [opening combat jobs to women] is a pro-woman policy,” she said.

Among the key issues that she cited were the findings of the Marine Corps in 2016 that women faced higher rates of injury than men while conducting combat operations. The Marines unsuccessfully attempted to use their findings to block former Defense Secretary Ash Carter’s order to open all military jobs to women.

Eden cited a study of an Army brigade combat team in Afghanistan that found during a combat tour in 2012, 58.8 percent of its women were injured while only 21.4 percent of its men suffered injuries. Additionally, she said, a sex-blind study by the British military found women were 7.5 times more likely to suffer injuries conducting the same training as men.

“Keep in mind that these are the stats on military women who maintain higher fitness standards and physical training demands than civilian women of the same age,” Eden said. “If very fit women on military standards are injured at much higher rates than men, drafting civilian women would mean much higher turnover, diminished combat effectiveness and fewer of both men and women coming home alive.”

Women have long served admirably in combat on battlefields across the globe and are now free to pursue any position in the military, including the most demanding special operations jobs, if they can meet the standards, a trio of military veterans told the commission.

Should the nation ever need to draft individuals into the military, it would be facing a crisis that would require the support of all Americans, said retired Army Lt. Gen. Flora Darpino, who left the Army in 2017 as the service’s top lawyer. She argued because only an estimated 30 percent of the U.S. population meets the basic requirements to serve, leaving women out of the draft would only make it more difficult to fill the ranks in such a major war.

“Even recognizing we may relax standards during a national crisis, we would still struggle as a nation to meet the required number for the armed forces if we exclude women who make up approximately 51 percent of our population,” Darpino said. “The exclusion of women is particularly nonsensical when women are currently serving in the military in combat units and in combat roles.”

Jason Dempsey, a retired Army infantry officer who served in Afghanistan and Iraq, said he supports registering women for the draft, in part, because military women have proven their worth on the battlefield thus he can find “no valid argument” the government should treat men and women differently.

“This is an argument about fully utilizing the talent and potential of American citizens to meet the challenges of a changing, yet continually dangerous, world,” he said.

In fact, Dempsey added, the military has only become stronger since women were allowed to enter combat arms fields, because it has forced the services to better establish physical standards to serve in jobs, such as the infantry.

But he argued it was about more than just physicality. In an infantry unit that includes dozens of men — and, potentially, women — there will always be individuals who are bigger and strong than others, but it is the most intelligent that commanders want.

“I think a lot of times we get caught up in a somewhat outdated view of what lethality is and means [and] …. it is decidedly not the bayonet charges of World War I,” Dempsey said. “We need to grapple with the idea that there are millions and millions of ways to kill another person, and not all of them involve the use of our arms and legs [as weapons].

“I want the smartest, most nimble mind well before I want the strongest person.”

Additionally, including women in the draft could boost the confidence of female servicemembers and increase the propensity of young American women to consider military service, said Katey van Dam, a former Marine Corps attack helicopter pilot who served in Afghanistan.

National service, especially at a time of existential crisis as would likely be the case should the draft be reinstated, is a civic duty for all American citizens, she argued.

“Requiring all Americans between 18 and 24 to register with the Selective Service will ensure that the United States is able to tap into the largest talent pool available to protect our way of life should the dreaded day arrive that we are credibly threatened,” van Dam said. “We can ill-afford anything less.”