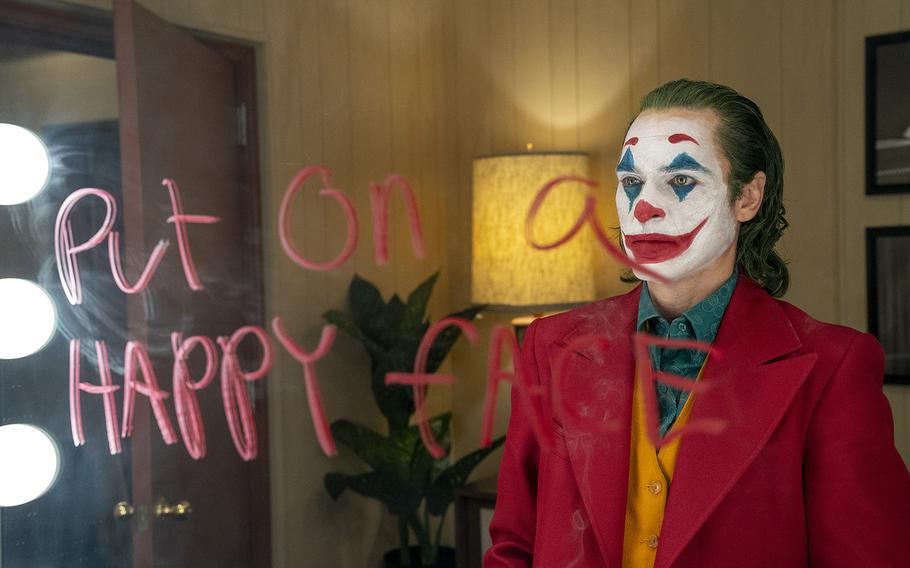 Military commanders in Oklahoma were warned of the potential threat of violence at the theatrical release of the upcoming “Joker” movie, though law enforcement officials are not sure which theaters may be affected.

An Army Criminal Investigation Command memo issued Monday put commanders at Fort Sill, Okla., on notice about an intelligence bulletin that said a Texas law enforcement agency working with the FBI had discovered “disturbing and very specific chatter in the dark web” about the possible targeting of an unknown theater for a mass shooting during the Oct. 4 release.

An image of the memo was posted briefly to the popular Air Force amn/nco/snco Facebook page before being removed Tuesday. The command, which is also known as CID, confirmed its authenticity to Stars and Stripes.

“Out of an abundance of caution, our Fort Sill office distributed the memo to internal military personnel at Fort Sill,” said CID spokesman Christopher Grey.

The memo was based on information in a bulletin from the Texas Joint Crime Information Center, Grey said.

An official at the Texas center, who declined to be named to discuss the matter freely, called the threat “valid,” but said there was no specific location mentioned.

CID has in the past issued warnings based on information from civilian agencies about matters that were found to not to be serious threats. Earlier this year, the command issued an internal warning about the “Momo Challenge,” though it had been widely debunked as a hoax.

Still, CID issued the warning because the challenge, which purportedly involved a series of increasingly dangerous tasks leading up to suicide or self-harm, “still has potential holding power over young and impressionable children” online, Grey told Stars and Stripes via email in April.

“The warning’s intent is to make the Army community [aware] of the susceptibility of children as … internet and social media platform usage increases,” he said at the time. “We have a significant role in preventing crimes and threats to our Army.”

The latest warning comes as the upcoming movie — which focuses on the eponymous villain (played by Joaquin Phoenix) from the Batman comics — has been winning awards at pre-release film festivals. But it has also come under fire for purportedly glamorizing its villainous and violent main character.

Families of the victims of a 2012 shooting at a screening of the Batman film “The Dark Knight Rises” delivered a letter Tuesday to Warner Bros., the studio behind both that movie and the “Joker,” criticizing the latest film portrayal for its “sympathetic” take on the villain’s rise from loner to killer, the Guardian newspaper reported.

The Batman movie just happened to be a blockbuster opening at the time the shooter, James Holmes, intended to commit the crime, George Brauchler, the 18th Judicial District attorney, who prosecuted the case, told the Denver Post.

Meanwhile, “Joker” director Todd Phillips has responded to the controversy surrounding his film, including some critiques arguing that it could inspire violence.