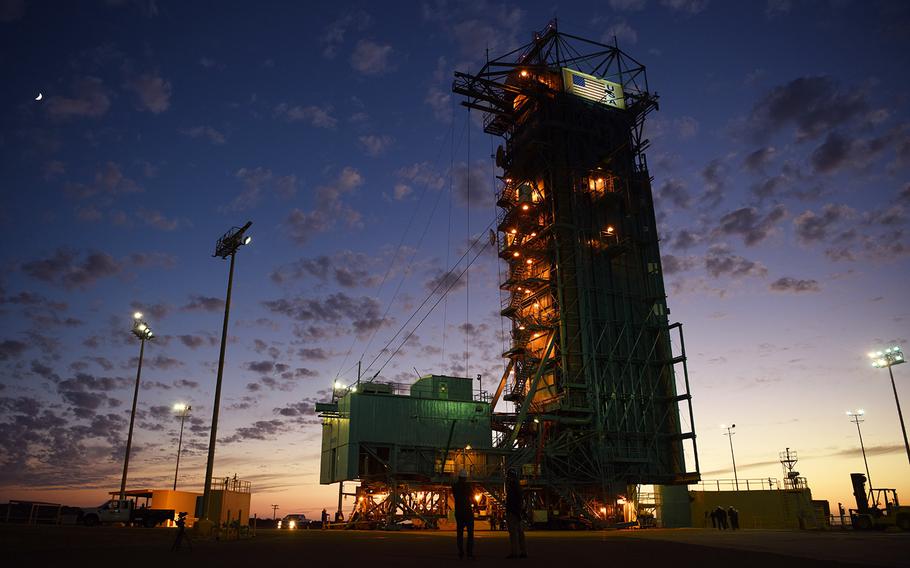 WASHINGTON — For the U.S. to remain the dominant power in space, the Pentagon needs military troops whose training is focused entirely on that domain and it needs a top general whose sole attention is on commanding space operations, acting Defense Secretary Pat Shanahan said Tuesday.

If the U.S. does not make those changes soon, China’s military will overtake American dominance in space quickly as it creates weaponry capable of destroying or disabling the Pentagon’s 100-plus military satellites that it relies on for communication and guiding forces and weapons around the globe, Shanahan said in a keynote speech delivered at the yearly Space Symposium in Colorado Springs, Colo. It marked the most clear-throated public argument from Shanahan in defense of the Defense Department’s proposal to reorganize its space operations, including building three new organizations — the Space Force, the U.S. Space Command and the Space Development Agency.

“The threat is clear: We’re in an era of great-power competition, and the next major conflict may be won or lost in space,” said Shanahan, who has led the Pentagon on a temporary basis since January. “This is not a future or theoretical threat, this is today’s threat. We are not going to sit back and watch — we are going to act. We are going to deter conflict from extending into space and ensure we can respond decisively if deterrence fails.”

Shanahan’s contentions were delivered just two days before he and other top Pentagon officials are scheduled to testify before the Senate Armed Service Committee on the building of the Space Force, a sixth military service that would fall within the Air Force Department, much as the Marine Corps is part of the Navy Department.

Shanahan on Tuesday explained the key roles each of the new organizations would have in improving the U.S. military’s space operations.

Pentagon officials have proposed building the U.S. Space Force, a new military service focused on space expertise that would grow to 15,000 to 20,000 troops, during the coming five years, Shanahan said. The vast majority of those troops would move from the other military services into the Space Force. The Pentagon has said that process would cost about $2 billion, though Shanahan previously has said that price tag could grow.

On Tuesday, the acting secretary compared the need for the new service, which would require congressional authorization, to the need for the Navy. Just as the Navy ensures freedom of navigation throughout international waters worldwide, the Space Force would ensure space remained available to all international parties.

“We need a military organization to ensure free navigation of the stars,” Shanahan said.

Like the Pentagon’s other military services, the Space Force would be responsible for providing combatant commanders with trained and equipped forces to operate in their physical or functional domains.

For space-focused operators now in the Air Force, the Army, the Navy and the Marine Corps, space is a secondary priority throughout their training, Shanahan said. By building a Space Force, it would make space their singular focus from the time they enter basic training throughout their entire careers.

“The Space Force will build a professional development system that recruits technical talent, educates them in space from the beginning, and provides a clear promotion path,” he said Tuesday, “all to produce the quantity and quality of space leaders we need to protect and defend space.”

While building a sixth military branch called Space Force has found detractors on Capitol Hill and the Pentagon, the need for a new, space-focused unified combatant command has had universal approval.

U.S. Space Command would command and control U.S. military space operations across the globe, headed by a four-star general or admiral who would be “a combatant commander focused on space every day,” Shanahan said Tuesday. Its primary roles would include coordinating the use of the individual military services’ space troops and assets and providing key functions including controlling space-based missile warning, communications, navigation, weather and imagery.

Space operations are now among several enterprises that are within U.S. Strategic Command, whose commander — currently Air Force Gen. John Hyten — is primarily responsible for commanding the American nuclear programs. Hyten consistently has said space is his third priority on any given day and has endorsed building U.S. Space Command.

Shanahan on Tuesday urged the Senate to move forward with Raymond’s nomination, telling the audience, “We are ready to establish the new command shortly thereafter.”

If the Space Force eventually is created, it would provide the bulk of troops who would be under Space Command’s control. However, each service is expected to maintain some small space capabilities that would focus on space missions that would be used only by that specific service. Those forces also could fall under Space Command’s control at times.

It would not be the first time that the Pentagon created a combatant command focused on space. U.S. Space Command previously existed from 1985 to 2002 and was based at Peterson Air Force Base in Colorado Springs, Colo., before it was rolled into Strategic Command as part of a post-9/11 reorganization.

“That construct worked well when space was primarily an uncontested supporting mission for others,” Shanahan said of the decision to reorganize. “Today, we need a command — and a commander — that spends 100% of their time focused on space.”

The Space Development Agency, which was established officially last month within the Pentagon, is the third space-focused organization that Shanahan has billed as critical to ensuring American dominance in space. The new organization is focused on research and design and is meant to acquire new technology quickly for space.

“The SDA will focus on developing and delivering the next generation of space-based communications and Earth observation [and] … explore, prototype, and demonstrate systems and architectures at a rapid pace that allows them to risk, try, fail, learn and succeed,” Shanahan said Tuesday.

He envisions tthat he new organization would work in close partnership with the private sector to leverage existing technology for military use in an effort to speed the Pentagon’s often-slow acquisition process.

The organization falls within the umbrella of the undersecretary of defense for research and engineering and is led by Fred Kennedy, a retired Air Force colonel who served as a policy adviser on national security space and aviation issues in former President Barack Obama’s White House.

When Shanahan testifies before senators Thursday, he will be joined by departing Air Force Secretary Heather Wilson, Marine Gen. Joseph Dunford, who is the chairman of the Joint Chiefs of Staff, and Hyten, the Strategic Command chief. They will face a room full of lawmakers who have expressed doubts about the Pentagon’s Space Force proposal.

As he did Tuesday, Shanahan is expected to outline the threats posed by China and Russia to sell the need for a sixth military service to those senators.

The Chinese could deploy ground-based laser systems aimed at low-earth-orbit space sensors within a year, Shanahan said, echoing findings this year of the Defense Intelligence Agency. The Chinese already have deployed an anti-satellite missile system and demonstrated it can be used.

Russia, he said, is attempting to hone much of the same technology, including advanced hypersonic missiles capable of traveling more than five times the speed of sound that the U.S. has no ability to track.

“China and Russia have weaponized space with the intent to hold American space capabilities at risk,” Shanahan said. “Today, we need to establish the Space Force to protect our future … Our competitors have made their choices. Space is under threat, but we are ready today, and we will remain ready as these threats expand.”