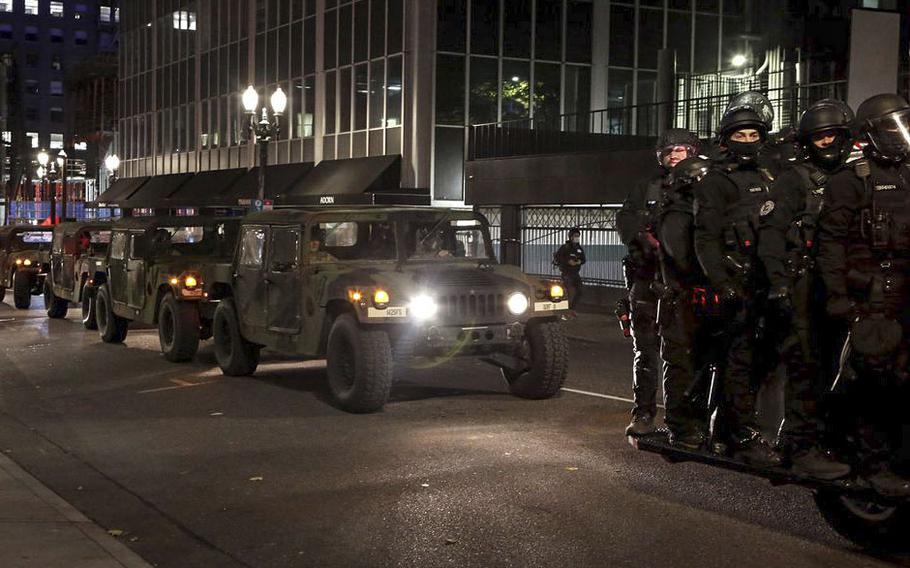 AUSTIN, Texas – Oregon Gov. Kate Brown on Wednesday night ordered about 50 National Guard troops into Portland to help control protests that turned violent in the wake of Tuesday’s presidential election. By Thursday afternoon, the troops were pulled out of the city.

“These are Oregonians like you and me, who have volunteered their time and taken leave from their jobs and their families to keep the streets of Portland safe,” Brown said in a statement released Thursday.

The state officials said troops could be sent back into Portland if necessary.

Governors in New Jersey, Pennsylvania, Florida, Illinois and Massachusetts also have troops ready should they be needed. As of Thursday morning, none have been deployed, according to officials in each state. Massachusetts Gov. Charles Baker said he readied 1,000 members of the state’s Guard, though most states declined to provide the number of troops on standby.

Many state officials throughout the country began planning last week whether National Guard troops would be needed to help at polling places on Election Day or quell protests in the aftermath of voting.

Concerns stemmed from a summer of civil unrest across the United States, marked by large demonstrations in many cities where protesters railed against racial injustice and called for political reform after George Floyd died while detained by Minneapolis police. In some cases, the protests turned violent.

Fears that Guard troops could be needed on Election Day were heightened by President Donald Trump’s comments that large-scale, mail-in voting could lead to widespread fraud and taint election results.

In Oregon on Wednesday night, two groups of protesters gathered in downtown Portland, Brown said. The first group of people supporting “racial justice and Black lives” demonstrated peacefully for hours, but a second group of “self-styled anarchist protesters, some armed” caused violence and vandalism, she said.

"I will continue to do everything in my power to keep the peace in Portland and make sure that people can make their voices heard safely,” Brown said.

Guard troops from Alabama and Arizona have been on standby since September as part of a 600-member rapid response force. The Pentagon’s National Guard Bureau created the force in response to nationwide protests during the summer.

Texas National Guard troops were seen at the state Capitol building Tuesday, according to a report by the Austin American-Statesman. Guard officials have said those troops were activated during the summer and remain on a mission to help the Department of Public Safety protect state historical landmarks.

With Trump tweeting claims of major problems with ballot counting in states where vote counting is ongoing, his supporters converged on ballot-counting locations in Detroit and Phoenix, the AP reported. Many of them shouted “Stop the count!” – a line that Trump tweeted Thursday morning.

Meanwhile, National Guard troops in New Jersey and Pennsylvania remain on duty to help with mail-in ballot counting and providing cyber security expertise, according to officials in those states.