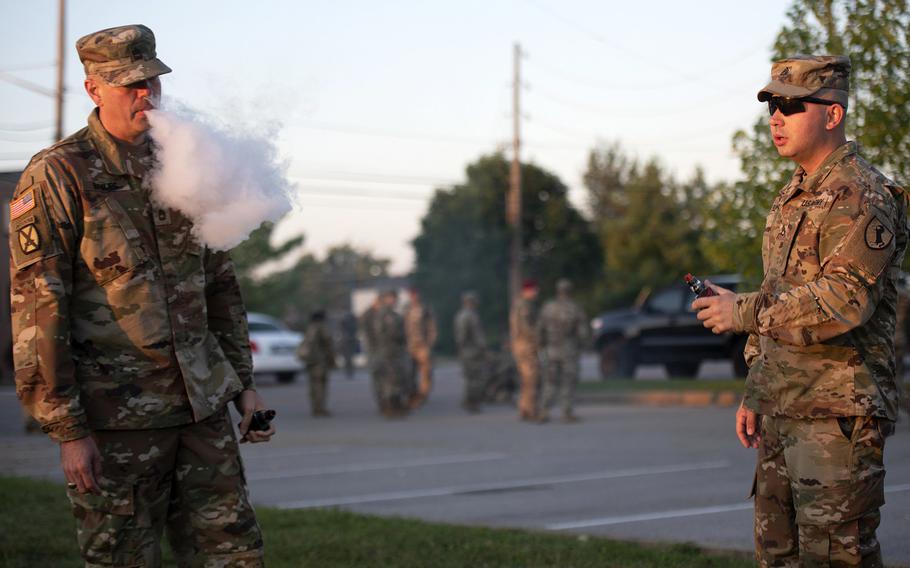 Sgt. 1st Class Bryson Briles, left, and Staff Sgt. Jorge Flechas enjoy a relaxing moment vaping before heading to class at U.S. Army Recruiting and Retention College Sept. 5, 2019. Briles said he vapes as a safer alternative to cigarettes. Flechas said he vapes for recreational purposes. Health officials say they suspect the more than 200 recent deaths and serious illnesses across a 25-state area in the United States are the result of vaping. (Eric Pilgrim/U.S. Army)

Servicemembers are being told to avoid vaping after the Centers for Disease Control and Prevention said the habit may be linked to hundreds of cases of severe lung disease, and at least six deaths, in dozens of states.

The Army Public Health Center issued an alert last week warning soldiers and family members to avoid all electronic cigarette and vaping products, “particularly those sold off the street or modified to add any substances not intended by the manufacturer.”

Troops and their loved ones may want to discontinue using products including e-cigarettes, e-hookahs, vape pens and electronic nicotine delivery systems until the CDC completes its investigation, the Defense Health Agency said in a post on Thursday.

Lung disease had, as of last week, been linked to vaping in 36 states and the U.S. Virgin Islands, the CDC said.

All patients who developed lung illnesses reported using e-cigarette products from a few days to several weeks before they became ill, the CDC said. Many reported using them with liquids containing cannabis byproducts that troops are prohibited from ingesting or inhaling.

Those who vape should monitor their breathing and digestive symptoms, and seek prompt medical attention if they experience any of the listed symptoms or other abnormalities, Millikan Bell said.

“Vaping of e-cigarettes should be highly discouraged at this time,” said Dr. Marc Williams, a toxicologist and vaping expert with the Army Public Health Center’s toxicology directorate.