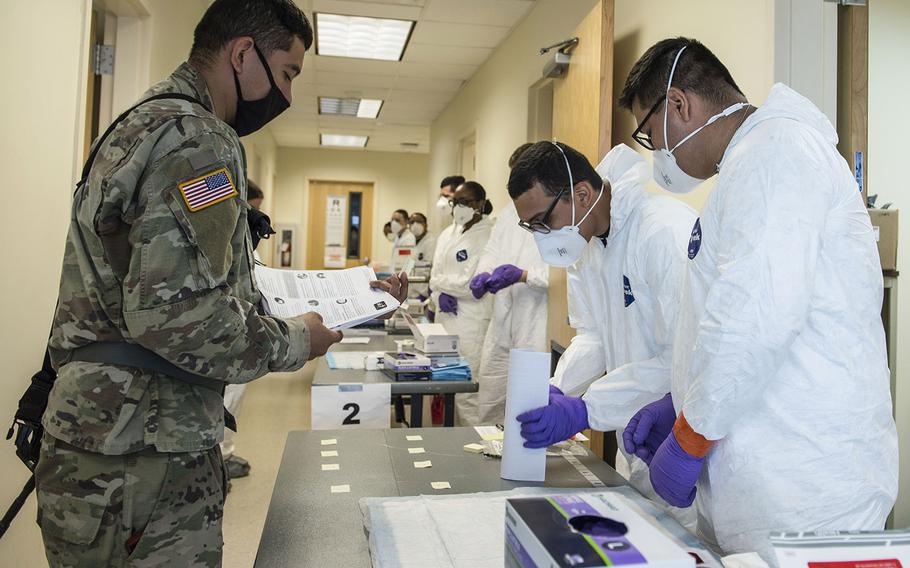 WASHINGTON – Two U.S. senators are urging the Defense Department to test all service members and their families for the coronavirus in order to contain outbreaks in the military and limit the threat to national security.

Sens. Joni Ernst, R-Iowa, and Thom Tillis, R-N.C., called on the Pentagon to use rapid antigen tests on all service members, their families, civilian employees and contractors to find asymptomatic carriers of the virus. In the past week, the department set a record for the highest number of new cases in one day among service members and reported an outbreak on a guided missile destroyer based out of Pearl Harbor in Hawaii.

“We urge you to immediately make plans to utilize the latest rapid antigen tests for coronavirus to detect the asymptomatic carriers of coronavirus,” the senators wrote to Matthew Donovan, undersecretary of defense for personnel and readiness.

Rapid antigen tests can be done at home or by a health care provider. They’re cheap to manufacture and deliver results in a matter of minutes, but they’re not as reliable as the usual tests, referred to as PCR tests. PCR tests are more labor-intensive and take longer to produce results.

Ernst and Tillis said in their letter that the rapid tests should be followed up by PCR tests and that the department has the resources to start. The action would “save lives, preserve hospital capacity and maintain military readiness,” the senators said.

Like the rest of the country, coronavirus cases among the military have surged in recent weeks. As of Tuesday, nearly 29,000 service members were sick with the virus and 11 had died. The 11th death was announced last week as a 52-year-old member of the Hawaii National Guard.

Nearly 111,000 service members, family members, contractors and DOD civilians have tested positive for the virus since the start of the pandemic, with cases increasing by more than 11% in the past five days.

Last week, Navy officials confirmed an outbreak on the USS Michael Murphy, sidelining most of its crew. About one-fourth of sailors assigned to the ship have tested positive, NBC News first reported.

Scientists are getting closer to approving a coronavirus vaccine. However, once one is available, the first doses are likely to go to high-risk groups, such as front-line health care workers and people living in nursing homes. Health experts predicted during a briefing Tuesday that vaccines could become available to the general public this spring.