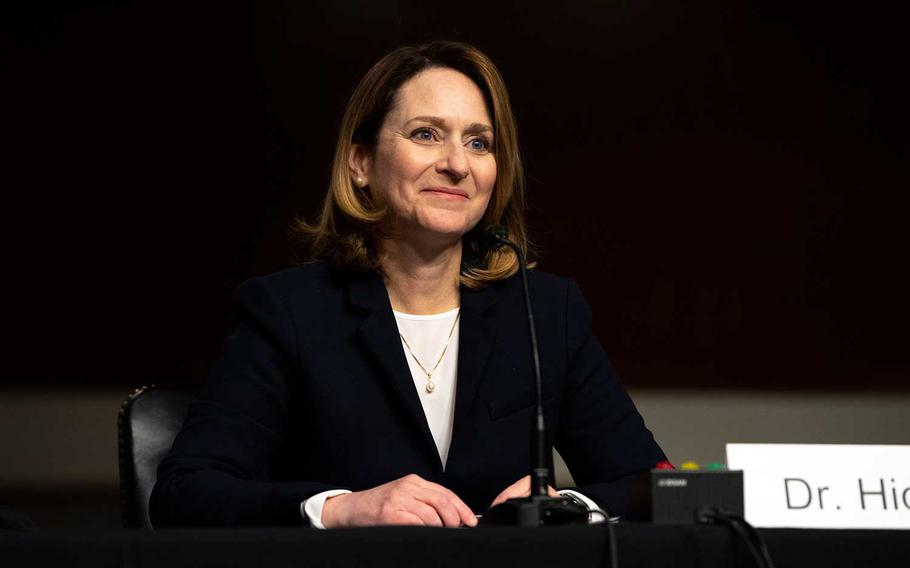 WASHINGTON — The size of the next defense budget and the Pentagon's lack of progress in addressing sexual assault were the focus Tuesday as senators questioned Kathleen Hicks during her confirmation hearing to be the next deputy defense secretary.

“If confirmed, I will assist [Defense] Secretary [Lloyd] Austin in bringing enduring, consistent focus to total force health and quality…We must root out violent extremism, systemic racism, sexual assault and harassment, and other inhibitors to readiness,” Hicks said during her opening statement before the Senate Armed Services Committee.

Sexual assault and harassment in the military has been a topic of concern in Congress for years, with lawmakers holding multiple hearings with Pentagon leaders, survivors, and advocates. The issue within the military captured national attention last year following the killing of Army Spc. Vanessa Guillen at Fort Hood, Texas. Her family has stated the soldier had previously been sexually harassed at the base, but she did not report it due to fear of retaliation.

A report on the investigation into the command climate and culture at Fort Hood released in December found the base had years of systemic leadership failures. Lawmakers have stated previously that they believe the problems found at Fort Hood extend further into other military communities.

Several senators on Tuesday voiced their disappointment in the lack of progress regarding the military’s handling of sexual assault and sexual harassment among personnel.

Sen. Richard Blumenthal, D-Conn., said he had grown weary of the words of good intentions from witnesses in hearings about sexual assault and harassment in the military, but little action has happened to address it.

Hicks replied she too was tired of hearing just talk that that has not led to change, and she committed Tuesday to focus on the issue at the Pentagon.

If confirmed, Hicks would be the first woman to hold the deputy defense secretary position.

“I would be proud to put another crack in the glass ceiling of the department I've spent most of my adult life serving,” Hicks said.

Sen. Kirsten Gillibrand, D-N.Y., has been an advocate for removing the authority of commanders to determine which sexual assault cases go to trial. During the hearing, she highlighted a recommendation from the Fort Hood report that “commander negligence at Fort Hood fostered a culture of violent crime, sexual assault and harassment,” and the Army’s Sexual Harassment Assault Response and Prevention program should be independent of commands and their legal advisers.

Hicks said she was “very open to ideas” for countering sexual assault and harassment in the military, including “removing commanders from that prosecution chain.”

One way to measure progress in addressing military sexual assault and harassment is transparency and data, Hicks said, such as collecting recent data on sexual harassment in the military, especially on how many claims are made because “we don’t know the totality of the reporting.”

“If you look at that microcosm of the Fort Hood community, it was very clear that [there] was significant under reporting underway. And so I think that's an area we want to look at right away in terms of making clear that reporting does not have negative consequences for the career of anyone in the total force, civilians, contractors, or military,” she said.

Sen. Tim Kaine, D-Va., said he had previously stood behind the position of providing military commanders with new tools and accountability mechanisms to address sexual assault and harassment, though he has been disappointed by the outcome.

“Many of us who were supporting those within the chain of command improvements have been very dissatisfied with the results and we're now very open to pursuing a different path,” Kaine said.

The defense budget for fiscal year 2022 also drew attention from some senators Tuesday. The budget submitted in the spring will be the first for the administration of President Joe Biden.

Sen. Elizabeth Warren, D-Mass., has been a critic about the size of the defense budget and wanted to know whether Hicks supported a reduced budget that does not sacrifice national security considering the ongoing economic troubles facing Americans due to the coronavirus pandemic.

Reductions in the budget would be possible without sacrificing security if the Pentagon, Congress, and the defense industry worked together on making “hard choices,” Hicks said. But she added those decisions could come with some risks.

Sen. Rick Scott, R-Fla., wanted to know whether Hicks thought it wise to reduce the budget when the United States faces challenges with China, Russia, Iran, and North Korea.

“I think that we should be driven by strategy, and that we have the ability to afford the defense that we believe we need among all the other requirements we might have,” Hicks replied. “Whether that's a slightly higher top line or a slightly lower top line, personally I think is less relevant than are we delivering the capabilities we need for the defense we should have.”