Senators call for military justice reform, as sexual assault in the ranks persists 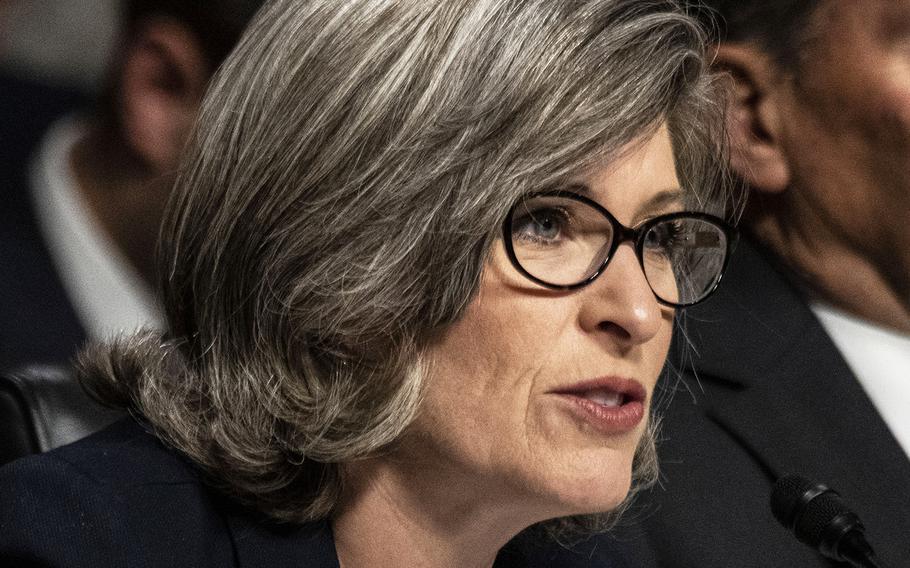 Buy Photo
Sen. Joni Ernst, R-Iowa, shown at a hearing in 2019, is throwing her support behind new military justice measures after a recent independent investigation into Fort Hood found a pervasive climate of abuse and sexual harassment at the Texas Army base. (Stars and Stripes)

WASHINGTON — Sen. Kirsten Gillibrand, D-N.Y., has fought for sweeping changes to the military justice system for years by urging other senators to back a bill that would take control away from commanders to decide whether to prosecute sexual assault cases and other serious crimes.

Since the Military Justice Improvement Act was first introduced in 2013, the bill has faced resistance from lawmakers on both sides of the aisle and military leaders who have testified the change in control of the cases would undermine “good order and discipline.”

But now a new, revised version of Gillibrand’s original proposal has the support of a key lawmaker.

Sen. Joni Ernst, R-Iowa, who had been on the fence for years about removing prosecution authority from the military chain of command, is now throwing her support behind Gillibrand, after a recent independent investigation into Fort Hood found a pervasive climate of abuse and sexual harassment at the Texas Army base.

The lawmakers stood together Thursday at the Capitol to introduce the Military Justice Improvement and Increasing Prevention Act, along with a group of other senators and sexual-assault advocates.

Ernst explained at the briefing that the modified proposal would still give prosecution authority to trained, independent military prosecutors, but it adds new prevention measures.

“By the time we have a survivor and a perpetrator, we have failed. From 2004 to 2019, Congress enacted 249 statutory requirements related to sexual-assault response and prevention, but only 9% of those were focused on prevention,” said Ernst, a military sexual-assault survivor and an Army veteran who served in Iraq as a member of the Iowa National Guard.

The new bill aims to prevent the occurrence of serious crime such as sexual assault by improving the physical security of military installations and increasing training and education about sexual assault for service members and commanders.

Lawmakers and sexual-assault advocates made the case at the briefing that the steady number of sexual-assault cases and low rates of convictions for perpetrators reveal the military’s court system is not effective.

Hours after the event, Sen. Tim Kaine, D-Va., who had also previously been hesitant to back the change in military law, announced in a statement that he’s supporting the bill because of “the lack of meaningful progress toward making the military a place free from the debilitating effects of discrimination and violence.”

The most recent data from the Defense Department estimated almost 21,000 service members were sexually assaulted in 2018, marking a significant increase from the department’s previous 2016 survey that recorded about 14,900 instances of sexual assault.

“This same report also revealed a record low rate of conviction. It's clear that this system is not working. We cannot have good order and discipline when crimes like these are occurring within our ranks and with a culture on base is one not of justice, but of retaliation,” Gillibrand said.

At the news conference, sexual-assault survivor Amy Marsh shared her story of retaliation and harassment after reporting a sexual assault — a pattern that is all too familiar, advocates say.

Marsh, a military spouse of a member of the Air Force, testified in March at a Senate hearing that a chief master sergeant sexually assaulted her while she lived on Travis Air Force Base, Calif.

Marsh explained when she came forward to report an assault, she and her husband were retaliated against so severely that her family requested to move to a different state and her case was dismissed.

“Had a trained, independent senior military prosecutor reviewed the facts of my case, I might have had a shot at sharing my side of the story in the court of law. Letting a judge or a jury make the decision instead of a commander,” Marsh said Thursday.

With tradition entrenched in its culture, the military has been unwilling to make the shift to independent prosecutors. The commander now remains in charge of discipline, ensuring responsibility for subordinates.

But experts have argued survivors of sexual assault have been silenced because they are less likely to report a crime, knowing the commander is in charge of the case.

Cruz, who has worked to whip up Republican votes with Gillibrand to enact the Military Justice Improvement Act, said lawmakers have heard testimony consistently that a commanding officer has “divided loyalties” to the assailant.

“The victim of assault believes the commanding officer is conflicted and so is afraid to report in the first place,” he said.

In fact, more than 76% of victims did not report the crime in fiscal year 2018, according to Protect Our Defenders, a national organization dedicated to combating rape and sexual assault in the military.

He also emphasized Ernst’s support “changes the balance on the bill” by boosting its momentum.

Ernst said she has always been “very torn” on this issue, but she has also said she would kept an “open mind” on taking this decision out of the chain of command if efforts to improve sexual assault in the military were not successful.

The toxic command climate at Fort Hood outlined in a report late last year pushed her to back the reform, and the bill would try to change that “horrible” command environment, she said Thursday.

The killing of Spc. Vanessa Guillen last year sparked an independent investigation that found a pervasive climate of abuse and sexual harassment, leading to the firing of at least 14 Army senior leaders by December.

Guillen, 20, was killed by a fellow soldier April 22, 2020. She had told her family that the suspected killer, Spc. Aaron Robinson, had sexually harassed her.

Last week, Guillen’s family gathered with their attorney at the U.S. Navy Memorial in Washington, D.C., to urge lawmakers to change how the military handles sexual-assault cases.

Guillen’s slaying sparked outcry across the country and prompted service members to share their own experiences with sexual harassment and assault. Just weeks after Guillen’s body was found, Rep. Jackie Speier, D-Calif., introduced the I Am Vanessa Guillen Act, which also failed to gain traction.

Similar to the Gillibrand bill, Speier’s legislation, set to be reintroduced May 13, would establish independent investigators and an independent prosecutor within the military who would be responsible for handling sex offenses.

Advocates are hopeful that growing support from Congress this year, on top of the potential for the Pentagon to back a similar recommendation, could override possible pushback from top generals.

An independent commission created by Defense Secretary Lloyd Austin in February was tasked with considering “all options” to combat sexual assault in the military.

The Associated Press reported last week that the commission recommended to Austin that the decision to prosecute service members for sexual assault be made outside of the chain of command.

Gillibrand’s bill would go further by requiring all felonies be handled the same way. The senator on Thursday doubled down that she would not entertain the idea of narrowing the bill’s scope.

“Military justice experts agree that you have to treat all serious crimes the same, because if you just pull out one serious crime, not only does that invite mischief of just not charging that crime, but also it risks demonizing and marginalizing survivors because they have some special court to go to,” Gillibrand said.

Don Christensen, a retired Air Force colonel and president of Protector Our Defenders, said Wednesday that he’s the most optimistic he has been in the last seven or eight years on this issue.

“My discussions I have had with people who are still in active duty — I think there's a resignation within the forces, leadership that this is going to happen. It's just a question of what's it going to look like,” he said.

Christensen said the similarities are greater than the differences between efforts to reform the military justice system, including the independent review commission’s recommendations, the I Am Vanessa Guillen Act and the proposal unveiled Thursday.

Plus, if President Joe Biden and Austin come out in support of the reform, “even if the generals disagree, they’ll fall in line,” Christensen said.

“I can't imagine that, at least publicly, they would come out and oppose the commander in chief and secretary of Defense. If they were to support this, and without their opposition, I don't think there's really any way this doesn't pass,” he said.