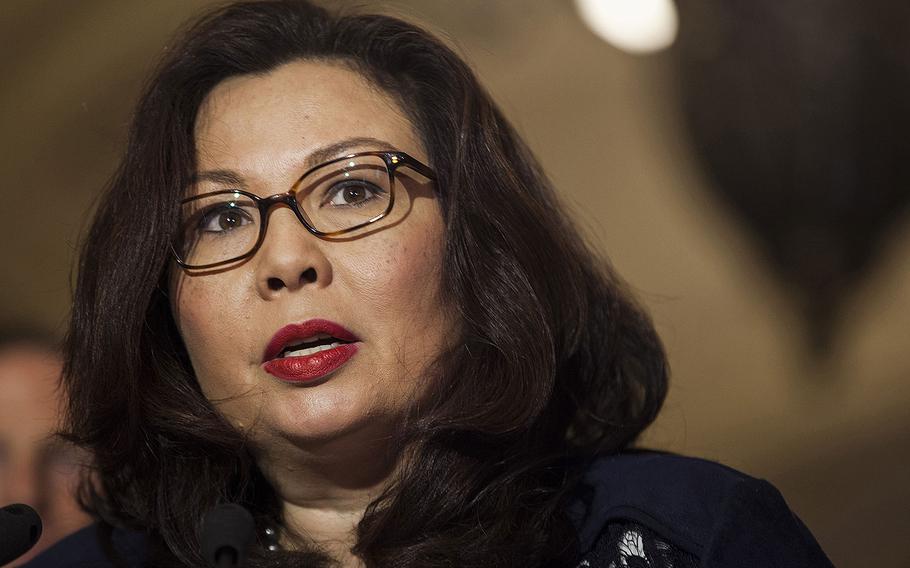 Sen. Tammy Duckworth, D-Ill., during a news conference following a Senate Democratic luncheon in Washington on May 16, 2017. (Zach Gibson/Bloomberg)

WASHINGTON – Sen. Tammy Duckworth, D-Ill., on Thursday urged the Department of Veterans Affairs and major credit reporting agencies to intervene on behalf of student veterans who could experience long-term financial repercussions from not receiving their monthly housing stipends on time this semester.

Citing information technology failures, the VA missed a deadline in August to implement part of the new “Forever” GI Bill, which Congress approved last year. The issue resulted in thousands of veterans not receiving their housing stipends or facing delays. Housing stipends are used by GI Bill recipients to pay for their rent, bills, food and other living expenses.

Duckworth, an Iraq War veteran, asked Equifax, Experian and TransUnion — national credit bureaus — to prevent the situation from damaging veterans’ credit scores. If they didn’t, she warned it could cause those veterans a “lifetime of hardship.”

“I think it’s going to hurt veterans for a long time,” Duckworth said. “If they’ve been kicked out of housing or made late payments, then this will affect their ability to get credit and perhaps buy a house or a car or start a business well into the future.”

The exact number of veterans affected by the delays is still unknown. The VA reported a backlog of 183,000 pending education claims in early October, and the most recent publicly available data showed the workload was 80,500 claims as of Nov. 30 – 22 percent more than the same week last year.

The VA received calls from about 1,000 veterans who experienced hardships because of the delays and had a few credible complaints from veterans facing eviction, said Robert Worley, the VA official who, until recently, led the implementation of the new GI Bill.

Navy veteran Robert Epps was one of those 1,000 hardship cases.

Epps, his wife and their two children live in Washington state, where he’s working toward an electrical engineering degree. The couple has a third child on the way.

Epps was relying on the monthly housing stipends to make ends meet, but by early October, he hadn’t received any money. To avoid eviction, he used up his savings and was forced to borrow money from family members.

After contacting his senator, Patty Murray, D-Wash., as well as the House Committee on Veterans’ Affairs and the VA, Epps eventually got paid. Now, he’s worried the aftermath of the delays will carry into next semester.

“I still have a bunch of…late fees to deal with,” Epps wrote in an email. “Between this stress and the birth of my son, I’m all but certain on a path to have to repeat these classes.”

Duckworth is calling on the VA to pay any penalties veterans incurred because of the delayed payments, such as Epps’ late fees. In a letter to VA Secretary Robert Wilkie on Thursday, she also asked that he work with the three credit reporting agencies to fix any negative credit ratings for those veterans.

Moreover, she wants the veterans to receive what they’re still due – with interest.

“Any monies they owe veterans, they should pay with interest,” Duckworth said.

VA officials said last week that they plan to distribute retroactive payments in January to veterans harmed by the delays.

Some veterans will have to wait until after December 2019 to get all they’re legally owed. Part of the new GI Bill changed how veterans’ housing allowances are calculated — they’re now supposed to be based on where veterans take classes, rather than defaulting to their school’s main campus. The change was supposed to be made by Aug. 1, 2018, but IT problems set back implementation to Dec. 1, 2019.

After mass confusion last week about whether those students would be retroactively paid, Wilkie said the agency would pay them after December 2019.

Some Democrats, including Duckworth, still seek more clarity on the issue.

On Thursday, she described the problems as a “failure of the VA, and a failure of government.”

If the VA fails to fully pay veterans what they’re due, the VA risks losing their trust, Duckworth said.

In Epps’ case, he’s already going into next semester lacking trust in the agency.

“I’m now left with no confidence in the system,” Epps said. “Will this happen again with the next semester?”