Senate to review transfer of military equipment to police 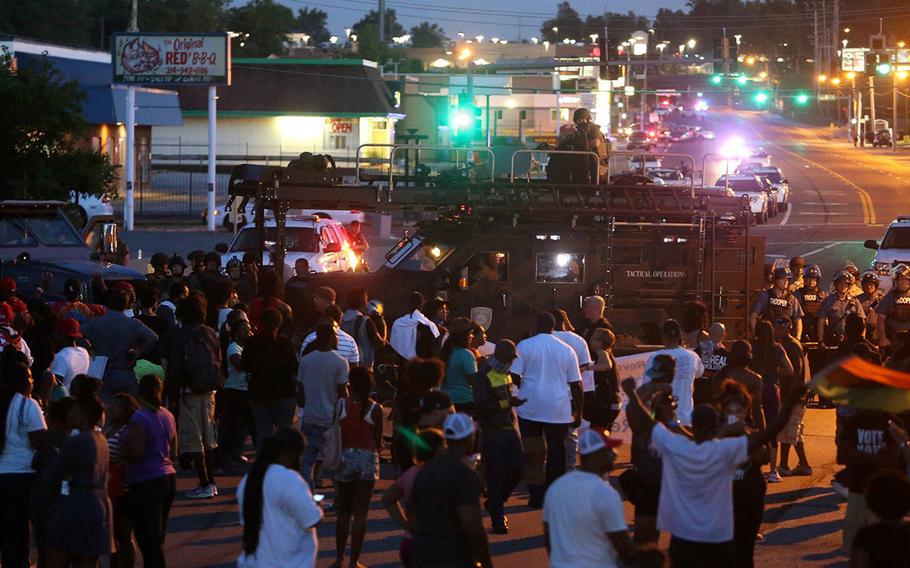 Protesters stand off with police in front of the QuikTrip on W. Ferguson Ave. on Wednesday, Aug. 13, 2014, in Ferguson, Mo. The protest was peaceful and the police allowed it until a couple objects were thrown at the police. The police then used tear gas and flashbangs to clear the area. (Chris Lee, St. Louis Post-Dispatch/MCT)

WASHINGTON — Public alarm over heavily armed police confronting rioters in Missouri has convinced the Senate to take another look at a federal program that gives equipment from Iraq and Afghanistan to the country’s local law enforcement.

Sen. Carl Levin, D-Mich., chairman of the Senate Armed Services Committee, said Friday he will take up a review of the Department of Defense excess property program when the chamber returns next month from summer recess.

The so-called 1033 program allows police departments to buy for a nominal fee armored vehicles, grenade launchers, drones, night-vision goggles and other battlefield equipment used by U.S. forces over the past 13 years of war. For example, a county in Ohio bought an Mine-Resistant Ambush Protected vehicle in June for $6,000 — the towering trucks used to protect troops from roadside bombs in Iraq cost the military $535,000 or more apiece — and such purchases are common in counties throughout the United States.

The 1033 program has been in place since 1990, at the height of gang activity from the country’s crack epidemic, and has recently been pumped up by the surplus of weapons and war spending following 9/11.

“Congress established this program out of real concern that local law enforcement agencies were literally outgunned by drug criminals,” Levin wrote in a statement Friday. “We intended this equipment to keep police officers and their communities safe from heavily armed drug gangs and terrorist incidents.”

Levin said the committee will review the program before the full chamber considers its annual defense bill, though it remains unclear when the massive piece of legislation will make it to the Senate floor.

Concerns had been rising for years over police — outfitted like soldiers in a war zone — intimidating the public, using excessive force or wielding equipment that could be dangerous to the public.

But the militarization of local law enforcement became starkly apparent in images from riots that broke out in Ferguson, Mo., this week after police there shot to death Michael Brown, an unarmed black teenager they said was suspected of robbery.

One published photo showed a group of police in camouflage military outfits, helmets, and gas masks pointing assault rifles at an unarmed black man with his hands in the air. Others showed police in military dress patrolling the area with armored vehicles, echoing now familiar images of the country’s overseas wars against Iraq insurgents and the Taliban.

President Barack Obama broke from his vacation on Martha’s Vineyard on Thursday to address the public concerns over the riot response, saying there is “no excuse for police to use excessive force against peaceful protests.”

Sen. Claire McCaskill, D-Mo., who traveled to Ferguson on Thursday, said the situation on the ground was “totally unacceptable” and said the Missouri police should respect the public’s right to peacefully protest.

“We need to demilitarize this situation — this kind of response by the police has become the problem instead of the solution,” she said in a statement.