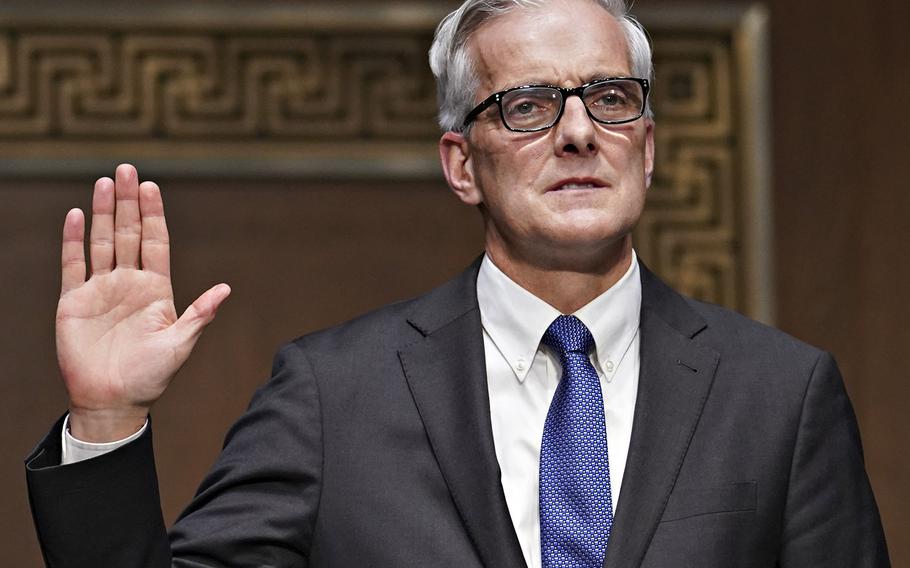 Secretary of Veterans Affairs nominee Denis McDonough is sworn in during his confirmation hearing before the Senate Committee on Veterans' Affairs, Wednesday, Jan. 27, 2021, in Washington. (Sarah Silbiger/Pool )

WASHINGTON — The Senate confirmed Denis McDonough as secretary of the Department of Veterans Affairs on Monday.

“Veterans need someone like Denis fighting in their corner,” Sen. Jon Tester, D-Mont., leader of the Senate Veterans’ Affairs Committee, said before the vote. “Now more than ever, veterans need a strong leader who will prioritize delivering timely, quality health care and benefits over making political points.”

Sen. Jerry Moran, R-Kan., the top Republican on the Senate Veterans’ Affairs Committee, had voiced his support for McDonough. However, he was unable to vote Monday because bad weather prevented him from traveling to Washington.

Moran first announced his support for McDonough during his confirmation hearing Jan. 27, citing his government experience. McDonough, 51, served as principal deputy national security adviser under Obama before taking the job as his chief of staff. McDonough began working with Obama in 2007 as the then-senator’s senior foreign policy adviser. Before working for Obama, McDonough held staff positions in the House and Senate.

“I’m a fighter, and I’m relentless,” McDonough said during the hearing. “I know and understand the federal government. I can unstick problems inside agencies, and especially at an agency as big as the VA, that’s important. I will deliver if I’m confirmed as secretary.”

McDonough is the second VA secretary to not receive a unanimous or unopposed confirmation vote in the Senate. Former VA Secretary Robert Wilkie was also not confirmed unanimously. Wilkie served as secretary from July 2018 until President Joe Biden’s inauguration Jan. 20. He received nine votes of opposition in the Senate, including from eight Democrats and Sen. Bernie Sanders, I-Vt.

McDonough is also the second VA secretary to never have served in the military. David Shulkin, nominated by former President Donald Trump in 2017, was the first.

McDonough said “getting our veterans through this pandemic” would be his top priority as secretary. As of Monday, 9,505 VA patients and 125 workers had died of the coronavirus – with nearly 25% of those deaths occurring in the past month. As McDonough transitions into the role, the agency is undertaking a massive effort to vaccinate millions of veterans, employees and caregivers.

In addition, the Veterans Benefits Administration, which is responsible for managing financial assistance to veterans, is working through a backlog of hundreds of thousands of benefits claims after the process was paused at the start of the pandemic.

The VA is also facing tens of thousands of personnel vacancies, as well as growing suicide and homelessness among veterans that isn’t ebbing despite recent efforts. The department is also undergoing a major change to its electronic health record system, building a new network of private-sector medical providers to treat VA patients, and expanding its assistance program for veteran caregivers.

Congress recently mandated a commission conduct a comprehensive review of VA facilities and determine buildings to close and where to invest. The commission’s work is set for 2022.

Advocates for minority and female veterans are also calling for a culture change at the VA, and for the department to become more inclusive.

McDonough also said the VA has a role to play to address the relatively new problem of online bots targeting veterans and service members with false information. Sen. Richard Blumenthal, D-Conn., said during his confirmation hearing that the attack on the Capitol on Jan. 6 was a result of the disinformation campaigns. Many veterans joined the mob that stormed the building.

McDonough’s confirmation vote was the last act on the Senate’s calendar before the chamber starts the second impeachment trial of Trump. The House charged Trump earlier this month with “incitement of insurrection” for his role in the Jan. 6 riot. The Senate trial is set to begin Tuesday afternoon.