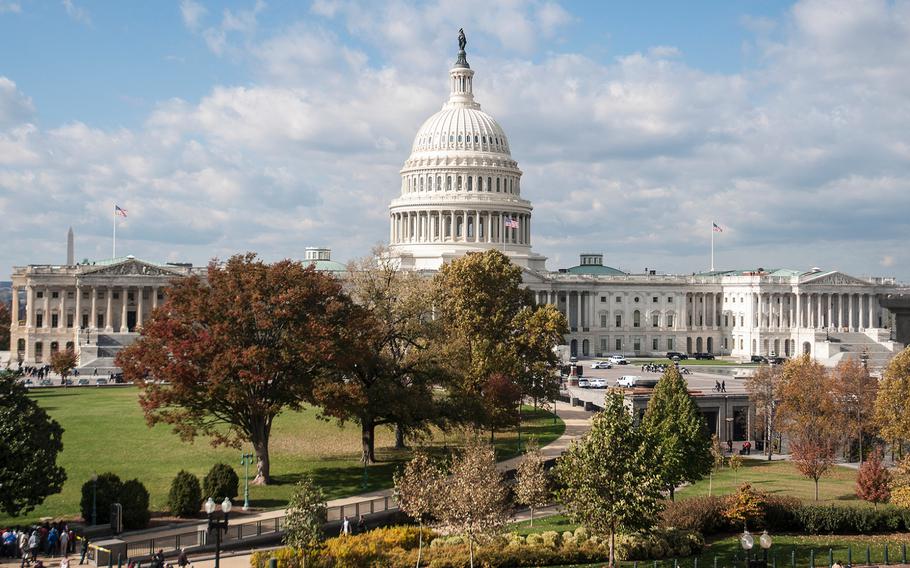 WASHINGTON — In a quick voice vote, the Senate on Thursday approved a massive defense bill, sending a nearly $700 billion plan that would enact raises for servicemembers, increase the size of the military, fund new ships and aircraft and authorize new spending on missile defense, to the president’s desk ahead of the Thanksgiving holiday.

Though the plan overcame a significant hurdle Thursday, it sets the stage for a new fight on how to fund the major increase in military spending. The plan busts budgetary caps and would need special legislative action to fund all the new priorities.

“Not only will this legislation authorize the resources, capabilities, pay and benefits that our men and women in uniform need to perform their missions, but this year’s bill also goes further,” he said. The measure “takes a notable step toward authorizing the resources needed to start rebuilding our military and restoring combat readiness. It will help improve our missile defense capabilities and better prepare us to deal with cyberthreats.”

The plan was approved by a conference committee of Senate and House members last week, sending it to the lower chamber for approval on Tuesday and its subsequent passage in the upper chamber.

“The overwhelming, bipartisan support for this defense budget should serve as a reminder of the troubling state of our military today,” said Senate Armed Services Committee Chair John McCain, R-Ariz., who helped shepherd the bill. “I call upon the president to sign this important legislation into law — and in doing so acknowledge that this is the level of defense spending necessary to meet current threats, prepare for the challenges of an increasingly dangerous world, and keep faith with our men and women in uniform.”

Congressional conference committee members who negotiated the deal have lauded the plans under the defense bill, also known as the National Defense Authorization Act or NDAA. It authorizes funding for the Department of Defense and national security programs through the Department of Energy.

“Unfortunately, as the world has become more dangerous, we have cut the resources for our troops,” House Armed Services Committee Chairman Rep. Mac Thornberry, R-Texas, said in a statement following the bill’s House passage Tuesday. “It will take more than one year and more than one bill to rebuild the strength that we have squandered, but the Constitution explicitly tasks the Congress with doing just that. This (bill) is an important start. It begins to rebuild our military strength; it gives our troops a much-needed pay raise; it replaces equipment that is just too broken to keep fixing.”

However, the proposal surpasses the budget cap of $549 billion for defense spending and will require new congressional action to be enacted. Otherwise, the proposed budget could trigger automatic, across-the-board spending cuts.

“Unless we follow the NDAA with an appropriations bill at the same levels, none of this work can begin,” Thornberry warned. “Securing those appropriations must be Congress’s top priority before the year ends.”

The bill is comprised of a base budget of more than $620 billion, with $66 billion in a warfighting account not subject to budget caps called the Overseas Contingency Operations fund and another $8 billion for other defense activities.

The budget also passed on some proposals, declining on a House plan for the creation of a Space Corps, a new military service that would be an arm of the Air Force.

The defense budget also directs $26.2 billion for 14 new ships and $10.1 billion for the purchase of 90 Joint Strike Fighters, which is 20 more than the administration’s request. It directs another $5.9 billion for Virginia-class submarines, $5.6 billion for Arleigh Burke-class destroyers, $4.4 billion for aircraft carriers, $3.1 billion for Army helicopters and $1.9 billion for procuring 24 F/A-18 Super Hornets.

The plan also authorizes $141.8 billion for military personnel, including the cost of pay, allowances, bonuses, death benefits and change-of-station moves. It authorizes another $33.7 billion for the Defense Health Program and reauthorizes 30 types of bonuses and payments linked to recruiting.

It also streamlines the Pentagon administration and details a new No. 3 position that goes into effect at the Pentagon next year for a chief management officer to direct business reforms. It also formalizes a first-time auditing process for the department and it directs the secretary of defense to address a backlog of 700,000 departmental security clearances.

The defense bill also directs for the funding of repairs to the destroyers USS Fitzgerald and the USS John S. McCain. Both ships were badly damaged in separate, deadly crashes during the summer that left 17 sailors dead.

The overall boost in military funding request comes in the wake of a deadly year for the U.S. military when it comes to readiness and safety concerns.

McCain said during the bill’s previous debate on the Senate floor that 185 servicemembers have died in military accidents in the last three years.

“We are killing more of our own people in training than our enemies are in combat,” McCain said during the September debate.

In July, the House approved a $696 billion defense budget, while the Senate approved a nearly $700 billion plan in September.

Still, many of the efforts must overcome budget caps to move forward. In September, Congress approved a temporary funding measure that gave Congress at least three months to approve a new overall spending plan for fiscal 2018, which started Oct. 1.

But that also meant a new military budget was on the clock: Congress has until December to come up with a deal to fund its $700 billion defense proposal or it might have to delay its spending plans again.

Congress has been here before. Former President Barack Obama signed the 2017 defense policy plan on Dec. 23, 2016. But faced with another round of delays, a $1.1 trillion omnibus government spending bill that included the defense budget wasn’t approved until May. Until then, military operations were kept afloat by a short-term funding bill — as is the case now.