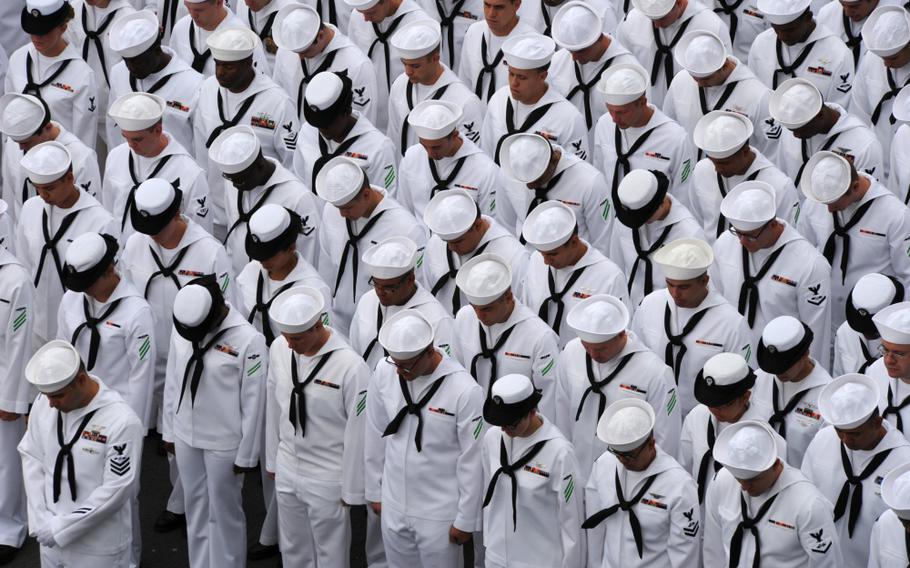 Task Force One Navy's creation follows other Defense Department efforts to address diversity in the military in response to the national dialogue over the past month about systemic racism in the United States and police brutality. (Michael E. Wagoner/U.S. Navy)

WASHINGTON — Before Lt. Destini Henderson was nominated for the U.S. Naval Academy, she experienced her first barrier to her military career from her own congressman.

“I remember meeting with my congressional representative in Huntsville, Texas — that’s where I graduated from high school. And he made it pretty clear that he did not believe that I belonged in the Naval Academy. So my very first barrier was from my hometown,” she said.

Henderson, of the US Naval Academy Minority Association, was one of several sailors to speak Monday about her experiences with racism and sexism as a Black woman in the Navy during the first roundtable discussion with the leadership of a new task force that aims to address disruptive bias.

Task Force One Navy was established June 29 to recommend reforms in nine key areas, including recruiting, promotion, health care and military justice. Its creation follows other Defense Department efforts to address diversity in the military in response to the national dialogue over the past month about systemic racism in the United States and police brutality.

The task force members are officers, enlisted personnel and civilians. It is led by Rear Adm. Alvin Holsey, an African American. Force Master Chief Huben Phillips, an African American, is the deputy, and the civilian adviser is Jane Roberts, who is Hispanic. All three listened to sailors’ stories during Monday’s discussion.

The leaders heard from sailors about racism, sexism and homophobia in the Navy and their recommendations for changes the task force could explore.

Henderson told the task force to assume that there are barriers everywhere for minorities. She described how her peers at the Naval Academy heckled her when she put her long hair into cornrows. And how the lack of representation at flight school meant she was one of two Black students to graduate.

Henderson was also “the only one that people could turn to” when sailors had questions or wanted to debate race and women’s issues.

Henderson said she wanted to see the task force work on providing education about the history of minorities in the Navy and acknowledgement of their service.

“I think education could absolutely go a long way. I remember taking naval history at the Naval Academy, but I didn't hear anything about minorities in the military, in naval history or anything like that,” she said.

Lt. Cmdr. Rolando Machado, of the Association of Naval Services Officers and a Naval Academy graduate, described his experiences as a Hispanic man who could not fully express his true self during his Navy career. Machado said he was raised in Miami and grew up in an environment where Hispanics were the majority. When he arrived at the Naval Academy where Hispanics are not the majority, he said he felt like “a fish out of water” and was not prepared for how the culture there would impact him.

“Going to the Naval Academy I realized I couldn't quite be as passionate or excited or loud as I was in Miami, because that was perceived differently. It was perceived negatively,” he said.

The experiences at the academy pushed him to start trying to figure out his Navy leadership style while also expressing himself, he said.

Machado spoke about the time he was berated by a chief petty officer for speaking Spanish with other sailors during a deployment, and that it was implied he was being un-American. He said it made him believe that expressing himself too much would “diminish” his ability to lead.

Another time, a sailor told him that he was “not even Hispanic” because he did not listen to Spanish music or speak Spanish, which is untrue. That experience also made him realize he could not stop being himself.

“I cannot change who I am to lead, I have to figure out how I lead using my style, but within the service. That's a long time, three years in the Navy to start figuring that out. I'm already behind the power curve,” he said.

Sailors want to be able to talk openly about these issues early in their careers, Machado told the task force. “Our culture within the Navy is a Navy culture, and the assimilation does have to occur to Navy culture. And accordingly, Navy culture needs to acclimatize itself to our diversity,” he said.

Yeoman 1st Class Julius Leaks told the task force’s leadership that if the Navy is going to train sailors on the inclusion of sex, religion or race, “we first have to teach empathy.”

“I think if the Navy focuses on teaching empathy … sailors can learn or get a sense of how other sailors feel in their shoes,” he said.

Yeoman 2nd Class Thomas Mahoney, who has faced discrimination for being part of the Lesbian, Gay, Bisexual and Transgender community, agreed with Leaks, adding that the Navy should teach all people to be more empathic when they join the service.

“Try to come up with an altruistic approach that takes into account everybody and has the utmost consideration of whatever is going to be taught … things that will emphasize humanity, because at the end of the day, that's what we are, we're human,” Mahoney told the task force leaders.

The first report from the task force will be submitted to Chief of Naval Operations Adm. Mike Gilday by the end of July, and a final report is due by December.