Sailors’ new take on role-playing worth a touch on mobile 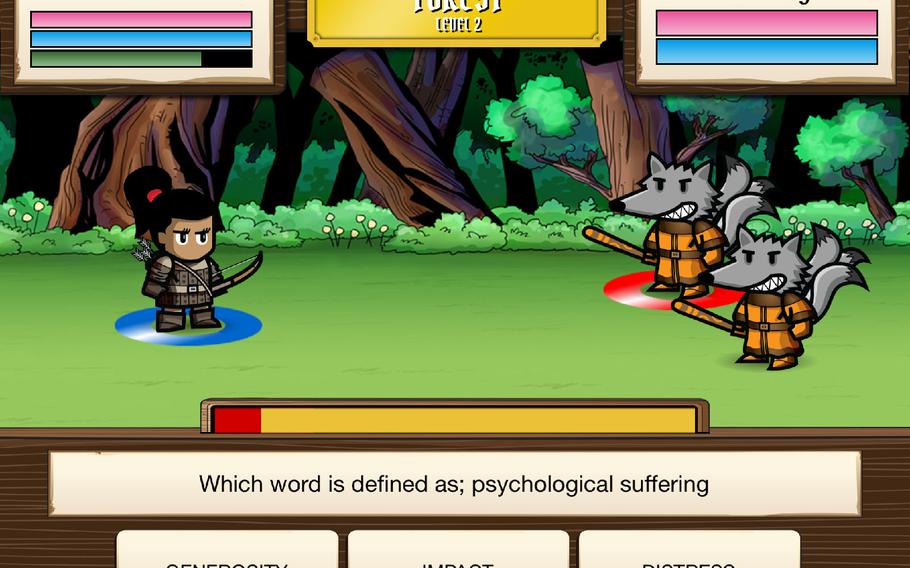 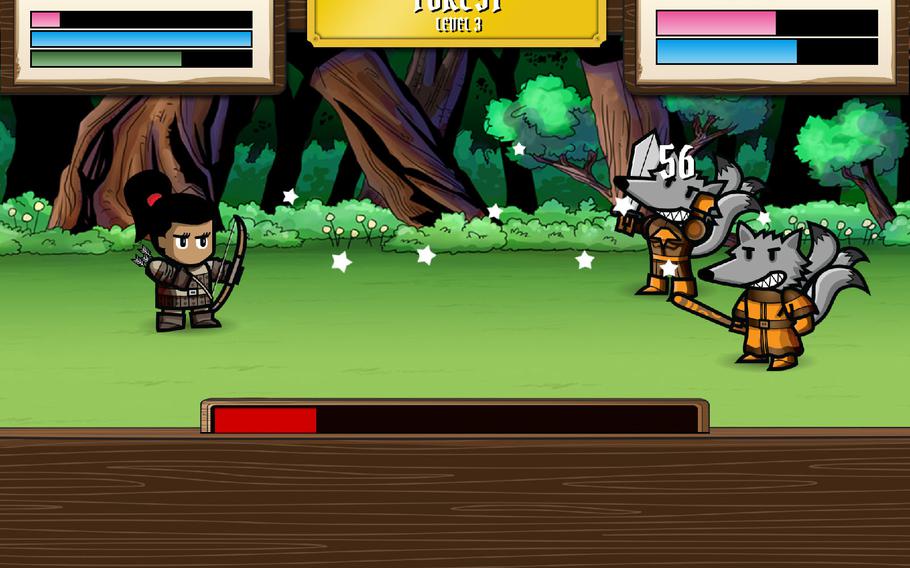 This screen shows the major frustration of "Quiz Hero." This is the second wave of attackers, with the first being easily destroyed. Now, one of these two enemies is nearly impossible to beat. Can you tell which one it is? I can't. (Screenshot) 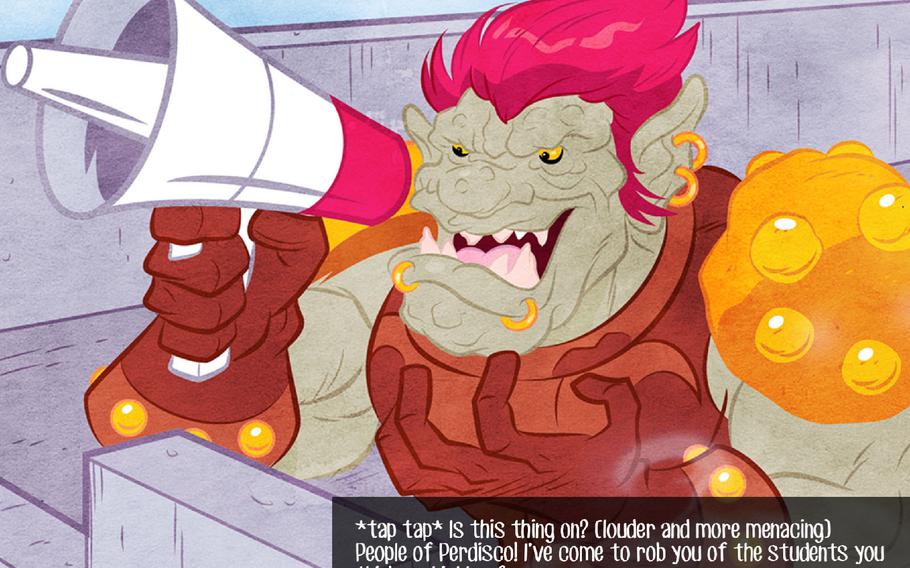 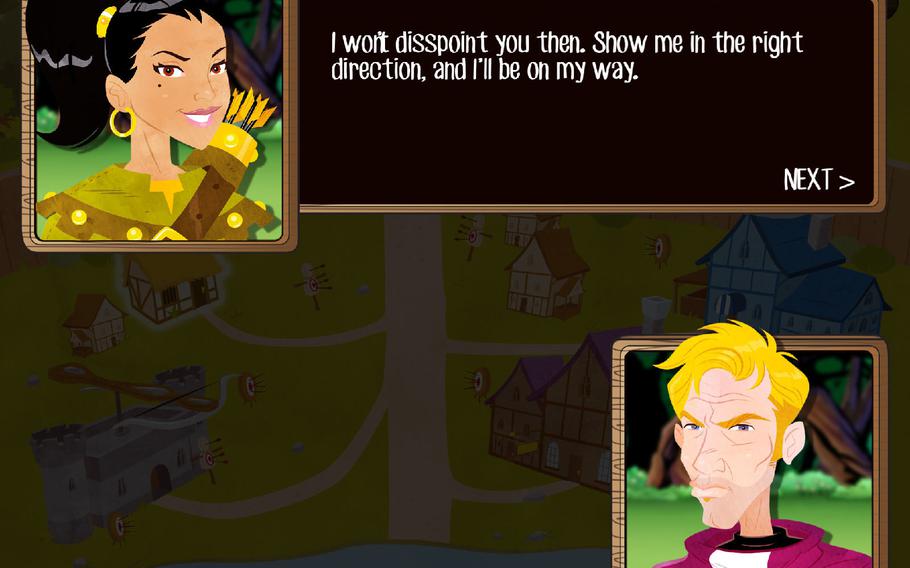 Pillar Games is a small development team, so some issues are bound to pop up, like this typo. Pillar promises regular content updates to fix these problems. (Screenshot) 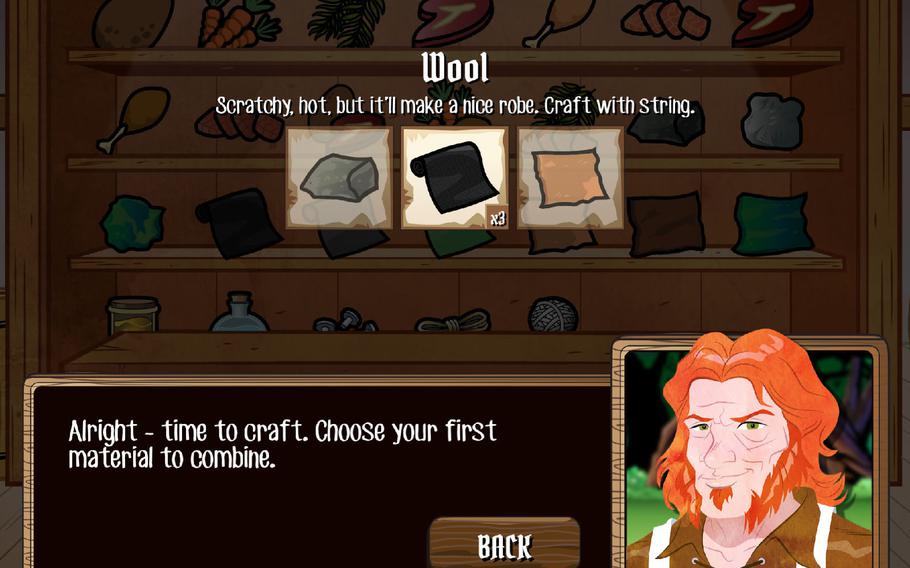 While traveling around "Quiz Hero," the wise adventurer seeks out crafting buildings that allow for the creation of healing items, armor and other necessary items. (Screenshot)

When speaking with Jonathan Coreson, the lead designer of the new free-to-play mobile role-playing/quiz game “Quiz Hero,” it’s apparent he has a love for challenging gaming conventions.

Rather than name-dropping a slew of gaming influences that lead to the creation of “Quiz Hero,” Corson would rather talk about how a study session gone awry lead to the idea for his first full-fledged game.

See, Coreson is an active-duty sailor with the U.S. Navy and one of four servicemembers that make up the core of Pillar Games, an upstart company that owes at least some of its success to a military entrepreneurship program.

While stuck out at sea for extended periods of time, Coreson and his shipmates would use flash cards to study for various exams. Over time, he said, the sailors created rudimentary quiz games out of the sheer boredom, and that lead to the genesis of Pillar Games and their first creation.

“Quiz Hero was born out of those flash card games that I actually built while in Japan,” he said. “I played a lot of games growing up, Final Fantasy and those types of (role-playing) games had a lot of influence on me.”

Those influences combined to create “Quiz Hero,” a role-playing game in which combat success is decided by answering questions as fast as possible. Think “Final Fantasy” mixed with a dash of “QuizUp” and you’ll have the general idea. It’s not the first game to tackle this mixture, but it’s a concept that remains woefully underused, so it’s refreshing to see it in place of the standard “press A to kill” formula.

At the start of the game, players pick from three classes: mage, archer or warrior, and then select a discipline: mathematics, vocabulary or general science. As you may have guessed, each category reflects the type of questions you’ll be asked throughout the game. The math category gives a special bonus to the warrior, vocab to the archer and science, ironically, gives a boost to the mage.

This is also where players are introduced to “Quiz Hero’s” business model for the first time. Each of the initial levels of each categories have a limited amount of questions, and each bonus at the first levels are fairly small. You can pay to unlock two more levels of both vocab and math for $0.99 each, or you can unlock them all at once for $2.99.

Once you’ve selected your hero and discipline, you’ll bear witness to the kidnapping of graduates by an evil ogre looking to take over the kingdom. The plot isn’t exactly the most exciting, but it’s helped out by some charming art work vaguely reminiscent of classic 80’s animation.

After a few unskippable conversations, players are finally thrust into battle for a taste of what “Quiz Hero,” is about. Your character is lined up opposite a slew of enemies. A question pops up, followed by a timer and a set of three possible answers. If you answer the question quickly enough, your character will deal full damage. If you get it right, but are a little slow on the trigger, you’ll deal half damage. Fail to get it right twice and you’ll miss.

It’s a fun and simple system that is easy to understand. I just really wish the rest of the game was as easy to grasp.

For starters, combat is lengthy. The introductory levels are overly long, with multiple waves of enemies coming one right after the other with no break in between. This leads to circumstances where your health bar is being whittled down and you don’t know how many more enemies you’ll have to face before getting a chance to restock on healing items.

In theory, this could lead to a more challenging experience, but there are some issues that combine to create some very avoidable frustrations. Some of the enemies you’ll face will be exceptionally easy. Your hero will be able to dispatch some foes with a single strike or two. Some of them, however, will be able to kill you almost instantly.

The problem there is that the super difficult enemies look exactly the same as the easy ones, and they both often occupy the same battle screen. So, there are times where you’ll be on the third wave of enemies, and you’ll suddenly just reach an enemy you can’t actually kill with your weapon set.

So, you’ll die and be kicked back to the map screen, but without any of the healing items used in the previous battle. This can lead to a vicious cycle of needing more money to buy better equipment, but also needing money to restock food in order to live. So, you’ll have to go back to an easier level, face enemies you’ve fought before while answering questions you’ve answered a dozen times.

When that happens, the game quickly turns from adorable to frustrating. Still, those situations are avoidable, once you understand what the game is asking you to do, but it’s presented in a way non-hardcore roleplaying fans might not understand. A simple palette swap to help differentiate the impossible enemies, or a system that lets players regain healing items after death would help.

The same types of problems mar the town hubs. There, players are able to craft food items, buy armor and sell off old gear. But buildings are not labeled, so it takes some tapping around to figure out which building you were actually looking for. The towns desperately need labels.

While I consider the first issue to be a major problem, the second one is fairly minor. Both really should be tackled with updates, and Coreson said the game will be getting constant attention from the developers. If they fix those issues, the game will be heads and shoulders above the vast majority of free to play mobile games.

It’s a charming, full-fledged roleplaying game that doesn’t feel like a knock-off of a better property. I had fun once I figured out the grinding aspect was mandatory, and the unique take on combat kept things interesting for a while. Coreson said the average player could get through the whole thing in 5-8 hours, but I think it’s closer to 10-15 hours, based on my experience.

Bottom Line: All in all, there are some rough edges on “Quiz Hero,” but it’s an easy game to recommend simply because it’s free. If Pillar Games supports it with continuous support like they claim, it would even get a recommendation if it wasn’t.