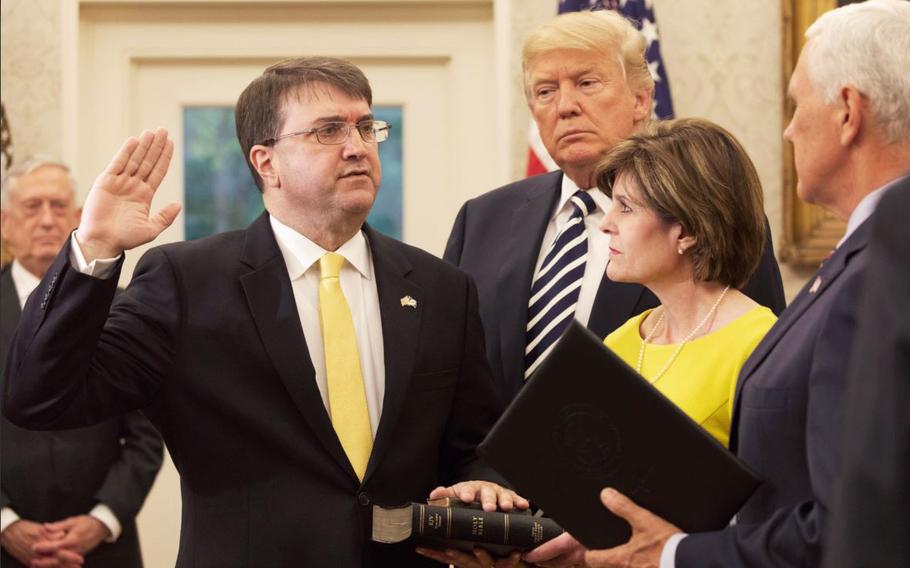 Robert Wilkie is sworn in as the new Veterans Affairs Secretary at the White House on Monday, July 30, 2018. (@realDonaldTrump/Twitter)

WASHINGTON — Robert Wilkie officially took over Monday as the secretary of the Department of Veterans Affairs during a swearing-in ceremony with President Donald Trump at the White House.

“I’m humbled by the prospect of serving those who have borne the battle, those American men and women who have sacrificed so much,” Wilkie, 55, said in remarks before the ceremony. “I look forward to this great adventure.”

Wilkie is now in charge of the second-largest federal agency, with more than 360,000 employees and an annual budget of nearly $200 billion. The department is tasked with providing health care, monetary assistance and other benefits to millions of veterans.

Since the VA became a Cabinet-level department in 1989, there have now been ten secretaries and five acting secretaries. Trump described the position as “very, very tough and important.”

“I know you’ll work night and day to fulfill our sacred duty to protect those who protect us,” Trump said Monday. “It’s a tough job, but a beautiful job. Congratulations.”

Wilkie is taking over during a time of immense change at the VA. He’ll be tasked with leading an overhaul of the VA’s private-sector care programs and overseeing a multibillion-dollar project to create a new electronic health record system, as well as implementing recently approved changes to the VA claims appeals process, caregiver benefits and GI Bill, among other things.

Lawmakers and veterans organizations are hopeful that Wilkie can stabilize the department after months of uncertainty about its leadership.

“We congratulate him on becoming secretary, and we look forward to him bringing stable leadership to the department and strong advocacy for America’s veterans,” Veterans of Foreign Wars Commander B.J. Lawrence said.

The VA has been without a permanent secretary since David Shulkin was fired in March as the result of a power struggle with political appointees assigned to the VA. Following his dismissal, Deputy Secretary Tom Bowman retired, and a handful of other leaders left the agency.

VA Press Secretary Curt Cashour said in a statement in April that the officials who left were “wedded to the status quo” and “not on board with this administration’s policies or pace of change.”

The Washington Post reported over the weekend that once Wilkie was VA secretary, he intended to form his own leadership team and reassign political appointees who were behind the staff departures.

The Post reported Cashour is searching for another job in the Trump administration. Camilo Sandoval, acting VA chief information officer, is expected to leave altogether, and John Ullyot, the VA assistant secretary for public and intergovernmental affairs, would likely be reassigned to another job within the VA.

In a statement Monday, Cashour denied the report and said he had no plans to leave the department. Additionally, Cashour said Ullyot will remain in his position, and there will be “no change whatsoever” to his duties. Sandoval “is not leaving the administration and will remain at VA,” Cashour said.

The Post went on to report that Peter O’Rourke, who served as acting VA secretary for about two months, would be reassigned to a less visible role.

During O’Rourke's time as acting secretary, he engaged in a public feud with the VA inspector general, prompting the Senate to approve a measure that would prevent the VA from blocking the IG’s attempts to investigate the agency.

Last week, three lawmakers, all Democrats, asked the Justice Department to investigate O’Rourke for perjury, after they suspected he lied in testimony to the House Committee on Veterans’ Affairs about his fight with the inspector general.

Senate Democrats asked for an investigation into O’Rourke following another Washington Post report that he was reassigning or purging employees who were perceived to be disloyal to Trump’s administration.

Rep. Tim Walz, D-Minn., the ranking Democrat on the House Committee on Veterans’ Affairs, said he remains skeptical of Wilkie, but is happy to see O’Rourke go.

“I look forward to bidding farewell to acting Secretary Peter O’Rourke, who has used his temporary status to intimidate the VA Inspector General and allegedly reshape the VA workforce for partisan gain,” Walz said in a statement. “With his confirmation… O’Rourke will be rightfully replaced, and Congress will finally have someone at VA who we can hold accountable.”