Retention rules tighten on members not medically fit to deploy 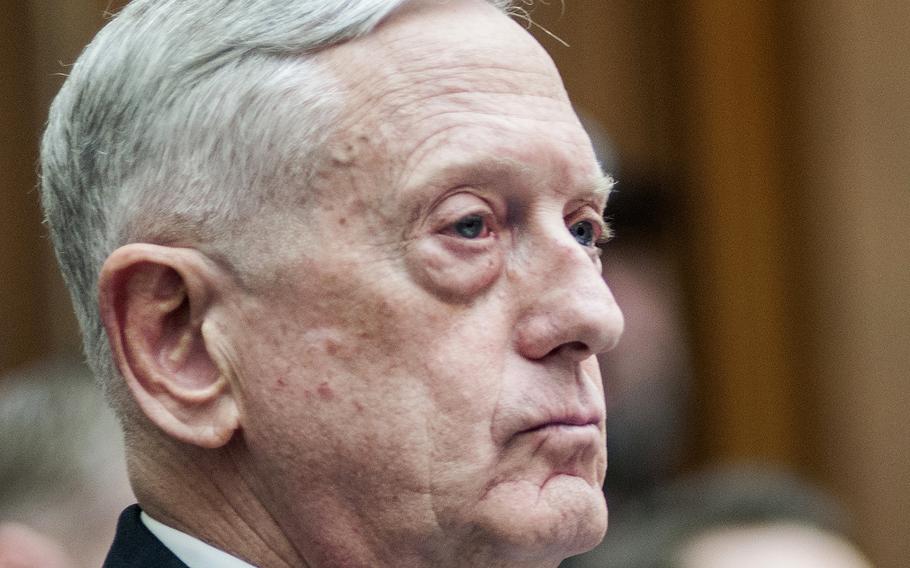 Buy Photo
Secretary of Defense Jim Mattis attends a hearing on Capitol Hill in Washington, D.C., on Feb. 6, 2018. While on a flight from Europe on Feb. 17, Mattis noted that too many srevicemembers are deploying too often because others cannot. That’s not fair to able-bodied members or to their families, he said, adding “The bottom line is we expect everyone to carry their share of the load." (Carlos Bongioanni/Stars and Stripes)

Defense Secretary Jim Mattis is concerned enough about strengthening the lethality of U.S. forces that he broke with tradition last month to impose a first-ever “universal retention policy” across the four service branches.

For decades the secretaries of the Army, Navy and Air Force have been responsible for retention rules that dictate whether individuals get to stay in, and for how long, based on needs of service branches including the Marine Corps.

The Office of Secretary of Defense oversees recruiting to ensure quality of volunteers. And Congress imposes various officer management and promotion rules. But force retention remained primarily the province of service secretaries and uniformed chiefs of staff, a senior Defense Department official explained.

Mattis broke with tradition after concluding that the military today is handcuffed by uneven and ineffectual retention practices, mostly associated with the medical health of the force.

Service leaders, particularly in the Army, long ago identified a rising pool of medically nondeployable members as a drain on readiness. At Mattis’ urging, force managers last summer took a closer look. The findings were alarming. One snapshot of the force showed the pool of nondeployable members at 286,000, or 14 percent of all active and ready reserve personnel.

Undersecretary for Personnel and Readiness Robert L. Wilkie, who is charged with correcting the problem, called the number “staggering.”

Some of the pool includes members awaiting retirement or separation with too little time of obligated service remaining to deploy. But the vast majority is sidelined by health issues. That not only harms readiness but impacts morale because too many members are deploying too often because others cannot.

That’s not fair to able-bodied members or to their families, Mattis said.

“The bottom line is we expect everyone to carry their share of the load,” Mattis told reporters during a return flight from Europe Feb. 17. He said he understands that “things happen — people bust their legs in training or they’re in a car accident [and] sometimes that takes months of recovery. … But this is a deployable … lethal military that aligns with our allies and partners. If you can’t go overseas [carrying] your combat load, then obviously someone else has got to go. I want this [obligation] spread fairly and equitably across the force.”

On Feb. 14 Wilkie sent a memorandum to service secretaries and Joint Chiefs of Staff announcing a new department-wide policy on the retention of nondeployable members. Here are the highlights:

12-month rule — By Oct. 1 this year, service branches must begin to process for administrative separation, or for disability evaluation, any servicemember who has been nondeployable for 12 consecutive months.  Immediate effect — The services can begin outprocessing nondeployable members sooner under this rule, if they choose, but they must start by October.There are caveats, however.

Pregnancy — Women who are pregnant or recently have given birth are automatically exempt from the new deploy-or-be-gone mandate. War wounded — Service branches are to give special consideration to members needing longer than 12 months to recuperate from wounds of war. Waiver authority — The policy gives waiver authority to service secretaries, or to designees at the service headquarters level, to retain nondeployable members beyond 12 months to meet needs of their service.“The situation we face today is really unlike anything we have faced, certainly in the Post-World-War-II era,” Wilkie told the Senate armed services subcommittee on military personnel. Internet retailer Amazon, he added, wouldn’t be the largest company in the world if its chief executive Jeff Bezos learned during Christmas week that “14 percent of his workforce could not perform their duties.”

Wilkie blamed several factors. One is the number of medical waivers granted to recruits while the services struggled to meet accession targets during peak war years in Afghanistan and Iraq. “The medical conditions that those servicemembers had when they received those waivers followed them into the service as they progressed through their careers. We have to address that,” Wilkie said.

Another issue might be inadequate training and fitness programs, he said.

A third has been lax leadership, with unit commanders not ensuring every member, as deployment nears, have had dental and medical issues identified and addressed. An Air Force reservist, Wilkie recalled that during his time as a young officer “we would have been accountable, as junior leaders, to make sure [troops] visited dentists to become dentally ready to deploy.”

Under the new policy, Wilkie said, medical boards will review the status of war wounded, taking into account their desire to stay in service if given time to recover. Wilkie told senators his own father, an Army officer, was severely wounded in Cambodia in 1970, hospitalized for a year, allowed to recover at Fort Bragg, N.C., and then continued in his military career.

“Those are the things we will take into consideration,” he said. “But we need to look at the force holistically. We have to ensure, given the [dangerous] climate this country faces, that everyone who signs up can be deployed to any corner of the world at any given time. That is the reason for the change in policy.”

His memorandum will be fleshed out with a more detailed Department of Defense Instruction later this year. That instruction also will codify reporting requirements on service branches so DOD can track progress on reducing the pool.

Asked by Sen. Kirsten Gillibrand, D-N.Y., how the new policy would impact transgender servicemembers, Wilkie said no group “would be unaffected” though the policy is not aimed at any group in particular.

“In a world where forces are at a premium [and] we are struggling to maintain the ranks, we need to get a grip on this,” Wilkie told senators.

The idea is “to impose a level of consistency on reasons for retention without wholly invading the province of the service secretary to decide what’s best for that service,” Barna said. Preliminary work shows about a third of people who currently can’t deploy need something as simple as a physical exam or dental care.