Residents sue Navy, others over radiation dangers from closed base on San Francisco Bay island 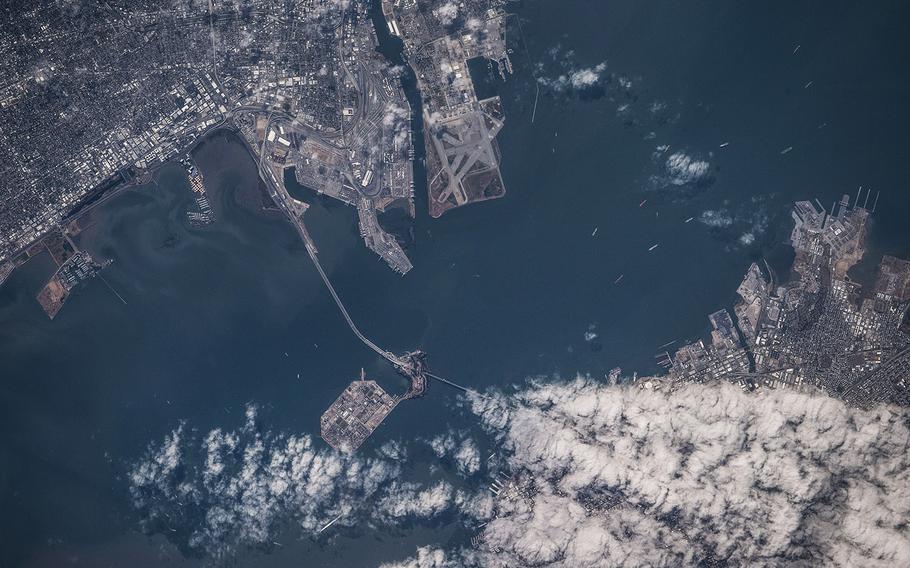 The International Space Station was orbiting off the coast of California in 2019 when an Expedition 60 crewmember photographed San Francisco Bay, Treasure Island, Oakland and a cloud-covered San Francisco. (NASA)

The International Space Station was orbiting off the coast of California in 2019 when an Expedition 60 crewmember photographed San Francisco Bay, Treasure Island, Oakland and a cloud-covered San Francisco. (NASA) 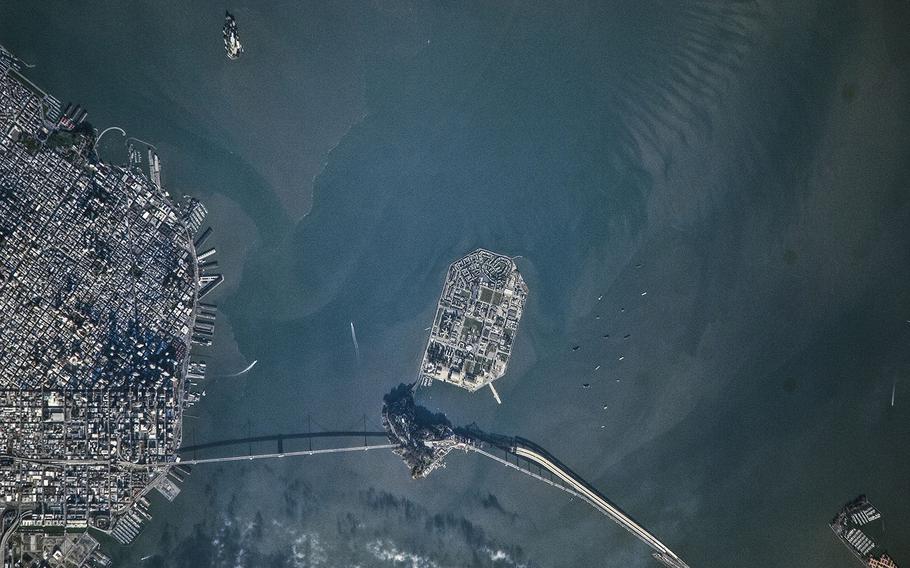 Alcatraz Island and Treasure Island can be seen near the center of this image of the San Francisco Bay, photographed with an 800mm lens some 215 to 220 miles above Earth in 2010. The image was taken by an Expedition 22 crew member aboard the International Space Station (ISS). San Francisco bay area structures including office buildings can be at the city's edge (left). (NASA) 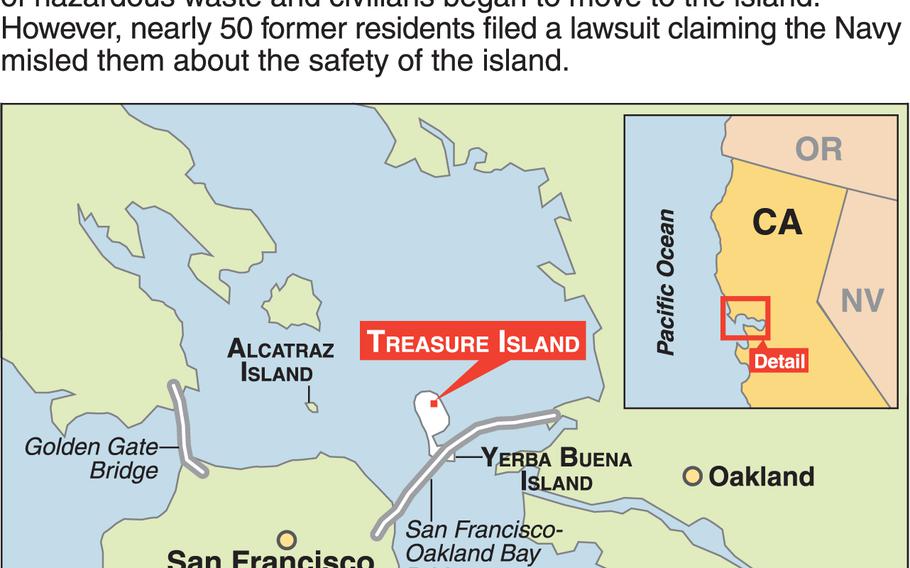 Nearly 50 current and former residents of a shuttered Navy base have filed a lawsuit seeking $2 billion in damages, alleging officials from the Navy, the state of California and the city of San Francisco lied about the levels of radiation and toxic contamination left behind after decades of military activity.

The residents who filed the lawsuit claim they were told that it was safe to begin moving into old military housing on Treasure Island in the San Francisco Bay. But they now suffer from illnesses and “fear of cancer” because they believe the radiation levels on the island from decades of military work, including decontaminating ships returning from nuclear testing at Bikini Atoll in the early years of the Cold War, are much higher than what service officials have publicly stated, according to the lawsuit filed Jan. 23 in San Francisco Superior Court.

Officials “purposely withheld true levels of radiation on the island,” said Stanley Goff, the attorney who filed the suit. “They continue [to say] that to the present date and they’re lying.”

Residents have suffered tumors the size of baseballs, extreme allergies and rashes, he said. Some former residents have died from cancers, though they have not been directly linked to radiation exposure. Even some pets of residents have been diagnosed with rare cancers, Goff said.

Civilians began moving into old base housing on Treasure Island in the late 1990s, but the lawsuit filed focuses on residents dating back to 2006. Many of the people moved using government subsidies to prevent homelessness, Goff said.

As illnesses began and fears of radiation exposure increased, residents had to decide to either stay in potentially hazardous housing or face homelessness, he said.

“It’s sad to put somebody in that type of position,” Goff said.

The two lead plaintiffs on the lawsuit, Felita Sample, 53, and Andre Patterson, 65, moved to the island in 2004, each using vouchers from the Department of Housing and Urban Development’s Shelter Plus Care program administered through leases with Catholic Charities. They had been on the area’s housing waitlist since 1998 and 1999, respectively.

Patterson, who served three years in the Marines, was living in a hotel at the time where bedbugs were a problem, and Sample was transient, moving between shelters with her young daughter. Both of them were told to take the housing on Treasure Island or get put back on the waiting list. Neither of them said they were told anything about radiation levels and toxic chemicals being present on the island.

Had they known, they said they wouldn’t have signed a lease.

Within two years of moving to the island, Patterson said he developed pimples on his back and shoulder that turned into tumors. Sample said she had and continues to suffer from stomach pains that make it difficult to eat. Her daughter, who was in first grade when they moved, had radiation rashes.

“The place out there was a dumping ground for throw-away people,” Patterson said, describing the community as similar to a government housing project. “It was not a good place to live.”

In 2012, Treasure Island made news headlines because the Navy confirmed to residents the possibility of radioactive waste. It was the first time that Patterson and Sample had heard of the toxic chemicals. It explained to Sample why an apartment building near her apartment was blocked off from the public with no explanation.

It has since been made public that the building sits on a former dumping ground where the Navy burned waste, including hazardous chemicals.

Patterson and Sample met while living on the island, and in 2017, the now-married couple moved off the island, back to San Francisco proper using a Department of Veterans Affairs housing grant available to Patterson.

Through filing the lawsuit, Patterson said he hopes former residents are compensated for the fraudulent information provided upon moving to the island, and “to get the island closed and get the people evacuated off the island with housing choice vouchers.” He said he also wants to see further development halted on the island, because construction releases toxins resting in the soil into the air.

About 2,000 people now live on the island, which also has a number of businesses and restaurants, a grocery store, schools, community-servicing organizations and recreation spaces.

The Navy’s public affairs office declined to comment on pending litigation and did not answer questions about the employment status of the men named in the lawsuit.

John Coté, spokesman for the San Francisco City Attorney Dennis Herrera, said in response to the lawsuit that the safety of San Francisco residents is their top priority.

“We take that responsibility very seriously. The information that we have from state and federal regulators is that the parts of the island where people live, work and visit are safe,” he said, while noting the majority of the allegations in the 23-page lawsuit do not involve the city and county of San Francisco. “The only allegation involving the city claims that officials withheld information from residents. That is false.”

Throughout the decades, the Navy has maintained it is safe to live and work on Treasure Island, a 400-acre manmade island in the San Francisco Bay. A December 2018 flyer released by the Navy answers “frequently asked questions” about safety concerns.

“All accessible areas of Treasure Island are safe to the public and confirmed to have no radiation above naturally occurring background levels,” according to the document.

Treasure Island actually consists of two islands connected by a causeway, halfway between San Francisco and Oakland, according to the Naval Facilities Engineering Command’s online history of the island. The northern island, known as Treasure Island, was built by the Army Corps of Engineers beginning in 1936 by dredging the San Francisco Bay as a place to host the Golden Gate International Exposition World’s Fair held in 1939 and 1940.

The southern island is a naturally occurring island known as Yerba Buena Island, which is about 170 acres. Military activity began on the island in 1866, according to the Navy, which operated the first West Coast Naval Training Station there until 1923.

The Navy acquired Treasure Island in 1942 and, as America entered World War II, all military operations moved from Yerba Buena to the larger, northern island. During the war, it became a major facility, with the Navy processing about 12,000 military personnel each day heading to and from overseas service.

Though the Navy’s official history of the island stops here, the subsequent years were spent hosting a variety of atomic warfare school and radioactive decontamination training that utilized chemicals such as plutonium and cesium, according to a 2014 report from the Center for Investigative Reporting. Journalists with the organization combed through boxes of files belonging to the Navy and the National Archives to piece together the four decades of Treasure Island’s missing history.

A 2014 Navy document reviewing the history of the island’s radiological activity outlines that the Navy held radioactive decontamination training at two locations on Treasure Island using a mock ship, the USS Pandemonium, until 1969. Aboard the ship, 11 pieces of cesium-137, a radioactive isotope used in nuclear weapons, were raised and lowered from lead enclosures so students could train on survey meters, according to the report from the Center for Investigative Reporting.

Other Navy activities, such as scrap metal yards and trash burn pits, also resulted in the dumping and disposal of toxic and hazardous materials that occurred on the island throughout the years when the Navy used them, according to the report.

Base housing and schools were built at the sites of some former dumping grounds as early as the 1960s, according to the 2014 Navy document. These facilities were used by military families until the base closed in 1997, including the apartment building next to the one that Sample said she lived in.

The Navy’s official history on the island base picks back up at its closure in 1997 as part of a round of Base Realignment and Closures, known as BRAC, approved in 1993. Upon announcing its closure, the Navy began plans to clean up the island to return it to San Francisco, which immediately saw it as an opportunity to increase its expensive, limited supply of housing.

Parcels of land have transferred from the Navy to the Treasure Island Development Authority, a state agency staffed by the city of San Francisco to conduct economic redevelopment of the island, as ongoing environmental cleanup was completed.

Two weeks after the Center for Investigative Reporting released its first report on Treasure Island in November 2013, which included its own soil samples showing elevated levels of radioactive contaminants in the soil near housing on the island, six residential buildings were evacuated. The buildings need to be razed for chemical cleanup, the news outlet reported.

The Navy’s hosted 200 public restoration advisory board meetings on the island since 1994 to provide updates on continued clean-up efforts. Once an area is deemed safe for the public, the Navy releases it to the development authority.

Six sites on Treasure Island are still under the Navy’s protective review, according to a September 2019 draft of the cleanup project’s second five-year review. A protective review means they are still monitoring and cleaning the area. The sites include a former fire training school, a section of the housing area, a former dry-cleaning facility and a day care center.

Based on a December 2019 presentation from the advisory board, the Navy spent $290 million through fiscal year 2019 on cleanup of the island and expects to spend about $5 million in fiscal year 2020. About another $11.6 million is needed to complete remediation.

The lawsuit counters that this is not the case.

“In reality, contamination levels are some three times higher than the Navy reported, and 60% higher than the Navy’s own safety guidelines,” according to the lawsuit, which cites outside testing from civilian agencies and media outlets such as the Center for Investigative Reporting and Reuters.

In its frequently asked questions flyer, the Navy wrote it is complying with all radiation protection standards established by federal and state agencies, including the Nuclear Regulatory Commission, U.S. Environmental Protection Agency and the California Department of Public Health. Some of the toxins that they are cleaning from the island include dioxins, fuels, pesticides and herbicides, asbestos, lead and arsenic, according to the second five-year review of remediation process.

Outside of asking for $2 billion in damages, the suit seeks to halt construction plans for a $6 billion luxury development that would increase the island’s population from about 2,000 to 19,000 by the end of 2021.

“The island needs to be decontaminated,” Goff said. “If they decontaminate it, they can do whatever they want.”