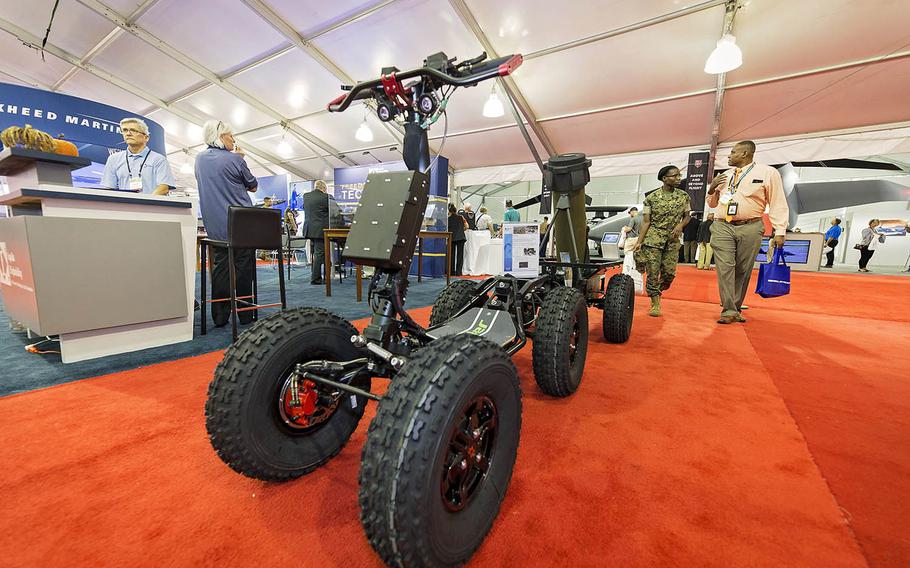 Visitors stroll by a display at the Modern Day Marine Military Exposition at Marine Corps Base Quantico, Va., Sept. 26, 2018. The event is a three-day showcase of the latest in defense manufacturing, science, technology and warfighting products by about 400 exhibitors. (James Frank/U.S. Marine Corps photo)

America’s defense industrial base is riddled with close to 300 security gaps or vulnerabilities that require immediate remedy, according to a report to be unveiled Friday at the White House.

President Donald Trump is scheduled to sign a series of measures Friday to kick off a broad action plan to mitigate vulnerabilities to the nation’s defense industrial base, a senior administration official told reporters Thursday while speaking on background during a conference call.

The report was spearheaded by the Department of Defense and included input from the departments of Energy, Commerce, Homeland Security and others.

The report identifies five “macro forces” that contribute to the vulnerabilities, including a decline in U.S. manufacturing capacity, industrial policies of competing nations, government procurement practices that lead to “perverse outcomes,” diminishing labors skills in the U.S. workforce and the effects of budget cuts and delays from sequestration, the official said.

The more than 300 subject matter experts involved in the study examined hierarchies of supply chains to identify vulnerabilities.

For example, with a weapons system such as the F-35 joint strike fighter, there might exist a seven-tier supply chain, the official said.

If a firm producing a critical F-35 component on, say, the fifth tier would not be able to accelerate production if the need arose, then that entire weapons system would be exposed to a so-called “single-component failure,” the official said.

The study also identifies a number of potential “single-point failures.”

For example, the propeller shaft for some U.S. ships and subs and large gun barrels for combat vehicles are produced by only one firm, the official said.

Supply-chain vulnerabilities exist in other essential materials, such as ceramics used in body armor and micro-electronics, high-performance aluminum and steel used in ships and combat vehicles, tungsten, rare earth metals and carbon fibers used in aircraft and missiles, the official said.

Dependency on foreign manufacturers has created vulnerabilities for the supply of rocket motors, machine tools, precision gyroscopes and night-vision systems, among others.

The official said some funding has already started flowing to mend gaps.

A plant that produces gun components has received almost $70 million in federal funding to modernize and launch a risk-mitigation program to keep the facility’s production line secure, the official said.