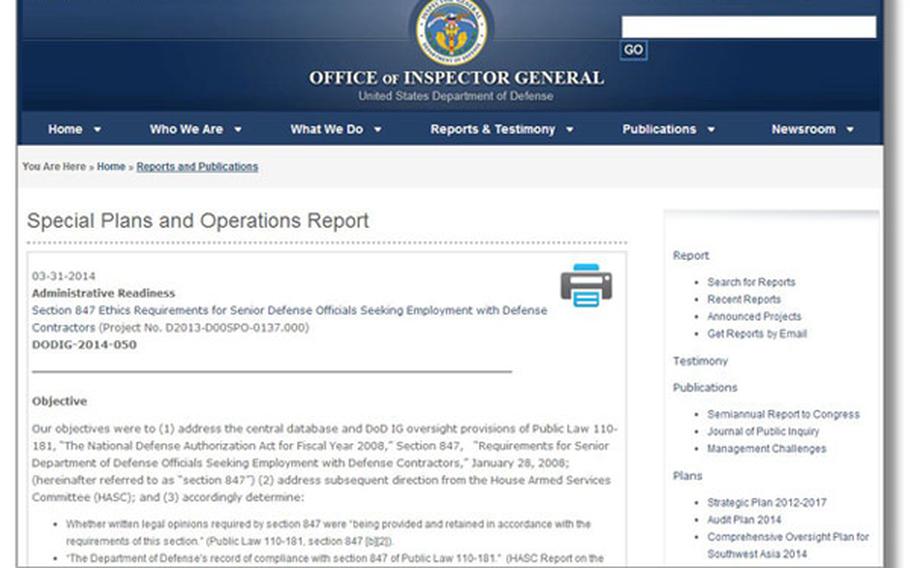 In the wake of concerns that defense officials with responsibility over contracting were moving to the private sector and improperly influencing the process — the so-called “revolving door” between government and industry — Congress took action in the 2008 National Defense Authorization Act.

The law required generals, flag officers, senior civilians and program officials to seek written legal opinions on their new jobs. Under the provisions of act, DOD was also required to keep all such opinions and reports accessible in a central database for at least five years — but the DOD Inspector General said Tuesday that isn’t being done.

The IG report said the database of such documents, known as the After Government Employment Advice Repository, or AGEARS, was “incomplete with little or no use by specific DOD organizations with significant contracting activity.”

Government watchdog group Citizens for Responsibility and Ethics in Washington sued the DOD to get a database of figures, which showed that between January 2012 and May 2013, 379 defense officials had sought opinions.

The inspector general said DOD could not provide requested data about postgovernment employment to Congress, and concluded ”DOD may not have fully complied with the intent of this law.”

Among the problems the IG identified, records are kept in different locations and many are missing, particularly at the Defense Logistics Agency and the National Security Agency — “organizations with substantial contracting activity,” the report said.

In response to recommendations from the IG, DOD managers admitted the 2008 NDAA requires a single, central database and took steps in early 2014 to consolidate the reports in the AGEARS system, the report said.

The IG also recommended that DOD establish a single official in charge of the records.

A news release from the office of Rep. Jackie Speier, D-Calif., who introduced legislation that required the IG review, said she was “extremely disturbed that the Department of Defense is willfully ignoring Congressional intent and not following the letter of the law to address the American public’s concerns about the revolving door between the Pentagon and defense contractors.”

“At the same time, it is important to note that the OIG's report did not cast doubts on the efficacy of the program of providing post-Government employment advice,” he said. “The robust ethics program instituted by the Department and multiple DoD-components has the concerted attention of the Department's leadership, and it is operating effectively to ensure that the taxpayers' interests are carefully protected.”