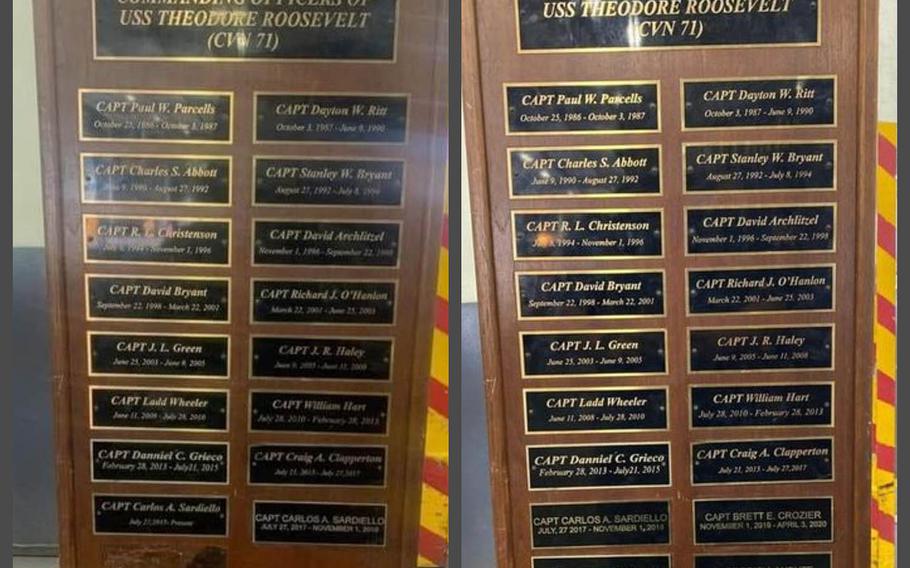 The photo on the left, which was uploaded to the JOPA Facebook page, shows a plaque aboard the USS Theodore Roosevelt that is missing former commanding officer Capt. Brett Crozier's nameplate. The image on the right shows the plaque, which was updated Oct. 22, 2020, to include all previous commanding officers of the aircraft carrier. (JOPA)

The photo on the left, which was uploaded to the JOPA Facebook page, shows a plaque aboard the USS Theodore Roosevelt that is missing former commanding officer Capt. Brett Crozier's nameplate. The image on the right shows the plaque, which was updated Oct. 22, 2020, to include all previous commanding officers of the aircraft carrier. (JOPA) 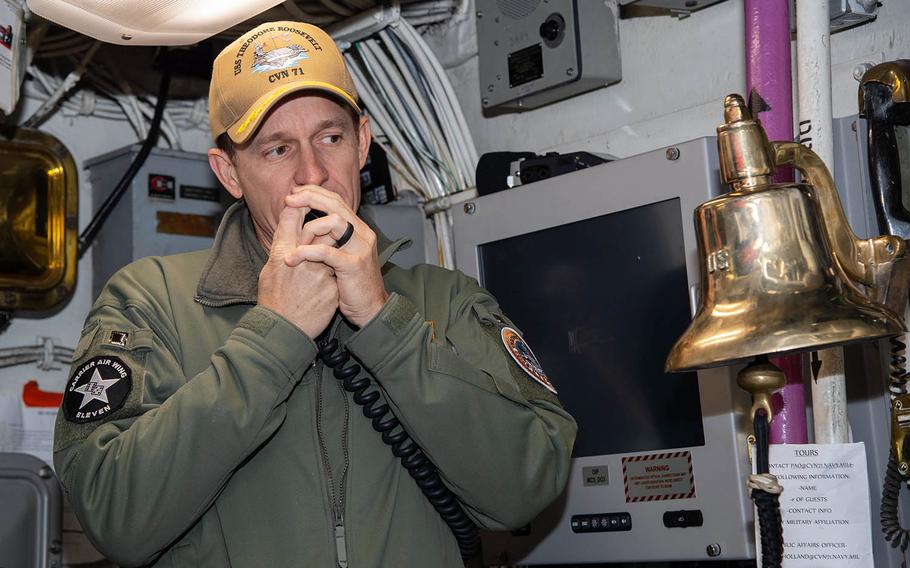 Crozier steered the carrier through a coronavirus episode in March that ended with then-Navy Secretary Thomas Modly relieving him of command. Crozier’s firing elicited an immediate backlash felt from the carrier deck to Capitol Hill.

Many commenters on Facebook assumed a vindictive move on someone’s part when Crozier’s nameplate went missing from a plaque listing all the carrier’s commanders past and present since 1986, but the carrier’s executive officer, Capt. Daniel Keeler, settled for a less sinister motive.

“(Sigh) It’s getting fixed — not a directed removal,” Keeler wrote on the original Junior Officer Protection Association Facebook post drawing attention to the missing nameplate. “We think someone took it as a souvenir.”

About eight hours later, Keeler posted an updated photo of the plaque, now featuring a new nameplate for Crozier; two new plates for his predecessor and successor, Capt. Carlos Sardiello; and one for the current commander, Capt. Eric Anduze, along with corrected service dates.

“Done. (Until someone else decides they want a ‘souvenir,’)” Keeler captioned the photo.

Crozier commanded the aircraft carrier when it diverted to Guam on March 26 to deal with a coronavirus outbreak that ultimately resulted in more than 1,150 positive cases. Modly removed Crozier from command on April 2 after a letter Crozier emailed his Navy superiors pleading for help surfaced in the San Francisco Chronicle.

Crozier’s firing was unpopular with much of the carrier’s crew. Sailors shared to social media videos of Roosevelt crew members cheering and chanting Crozier’s name the night he left the carrier for the final time. National news picked up the story, along with an audio recording of Modly denigrating Crozier during a later address aboard the carrier. Modly resigned shortly afterward.