Purveyor of ‘puppet oath’ video wishes it had never been posted 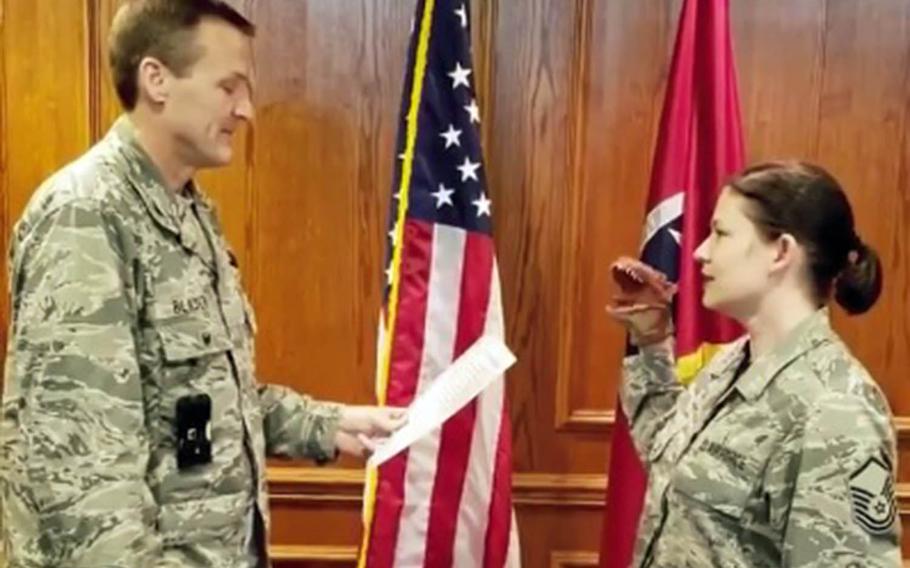 A screenshot from a video of an Air National Guard master sergeant using a dinosaur hand puppet while reciting the oath of re-enlistment. (Screenshot from Facebook)

If Steven Mayne could do it all again, he would not have posted the video that went viral and led to the forced retirement of a Tennessee Air National Guard colonel for allowing a re-enlistment ceremony that included a dinosaur hand puppet.

“For the part I played in this, I truly am sorry,” Mayne wrote in guest column on Military.com Sunday. “I’m unsure if there is any good that can be done here, but I ask the adjutant general to reconsider these actions now that the fog of war has lifted and the media interest has waned. We need to make this right.”

Air Guard Col. Kevin Blaser administered the oath on April 18 for Master Sgt. Robin Brown while she wore a dinosaur puppet on her raised right hand as it mouthed the oath she recited.

After Mayne posted the video on his “Air Force amn/nco/snco” Facebook page, it went viral and sparked outrage among some viewers who thought the ceremony was conducted in an undignified manner. The video was picked up by myriad media outlets and garnered millions of views.

Five days later, Maj. Gen. Terry Haston, the Tennessee Air Guard’s adjutant general, announced on Facebook that the colonel would be forced to retire and that Brown had been removed from her full-time position with the Tennessee Joint Public Affairs Office. It was later revealed that Brown would not be allowed to re-enlist.

A senior NCO who shot the video was removed from his position as a unit first sergeant and received an official reprimand.

During the days before the Haston announcement, Mayne wrote that he had assumed Tennessee Air National Guard officials “would simply re-do the re-enlistment with minor administrative punishment and it would not be a big deal.”

But Mayne, a retired Air Force master sergeant, said the punishment meted out was “entirely too harsh” and left him in “shock.”

“In a service that reduced a chief master sergeant to a senior master sergeant and allowed him to retire after killing a child by DUI, and also retired a colonel before he started a jail sentence for rape, the punishments to me did not fit the offense in this case,” he wrote. “I do not feel the actions taken by Haston were proportional to the infractions committed.”

Mayne wrote that he doesn’t know when a particular video on his site might go viral, but he feels remorse over this one doing so.

“Being shared on my page probably caused it to go more viral than it might have done,” he wrote. “And if I had the chance to do it over again, I would not have shared the video.”

Mayne said he hopes Haston will reconsider and allow Brown to re-enlist and continue her career, reinstate Blaser as colonel and waive punishment of the first sergeant.

Mayne told Stars and Stripes in an email Monday that he had gotten no response from the Tennessee Air National Guard to his column, which was essentially an open letter to the chain of command.

“I figured for the part I played, I had to do something even if it meant some folks being mad at me or my page,” he wrote.

Meanwhile, the 53-year-old Blaser recently told Military.com he made a poor decision for the oath.

“I should have probably stopped the ceremony,” he told the site. “That was bad judgment, I one hundred percent admit that.”

But he said the mistake did not warrant forced retirement, which he had to take as a lieutenant colonel because he had not completed three years as a colonel.

He said he does not plan to appeal the punishment.