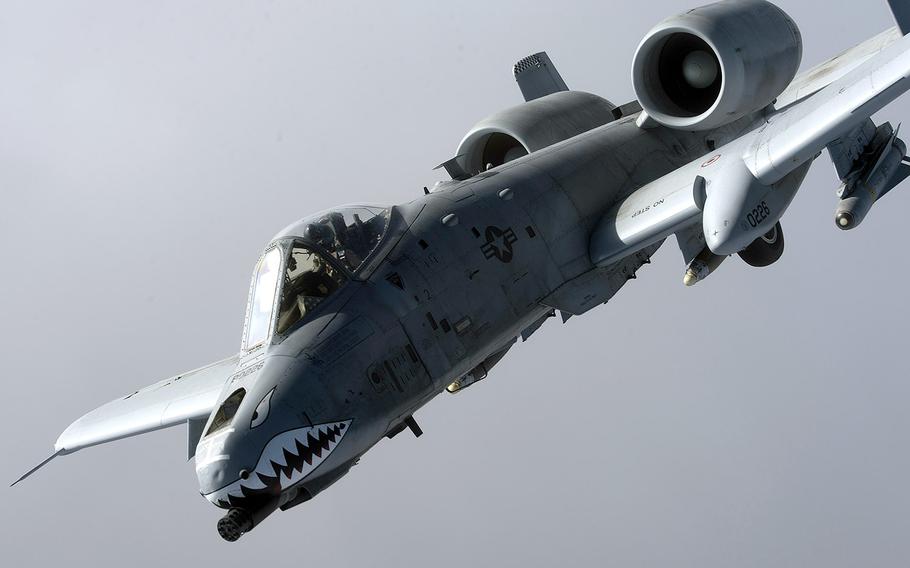 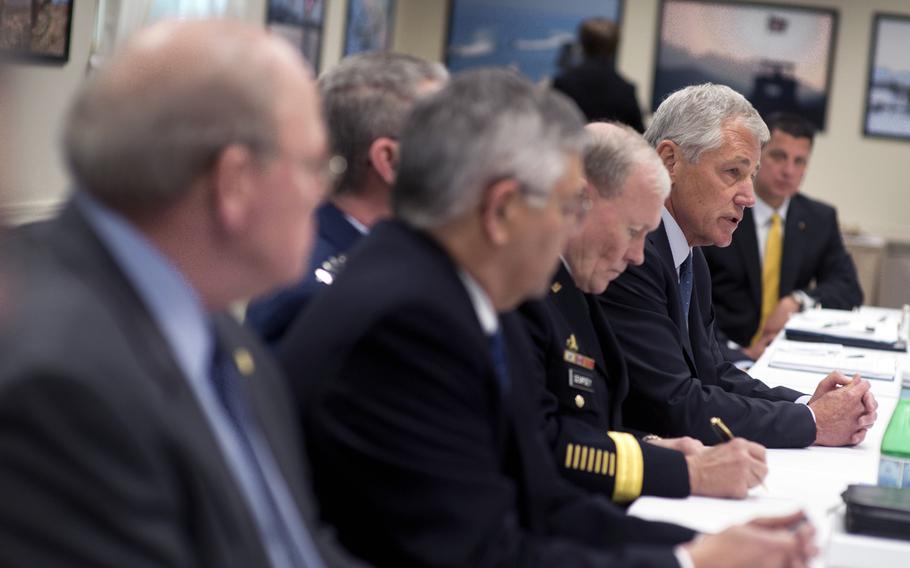 Secretary of Defense Chuck Hagel meets with Veteran and Military Service Organizations for a round table discussion at the Pentagon February 24, 2014. (Erin A. Kirk-Cuomo/Department of Defense)

WASHINGTON — Facing fiscal constraints, the Defense Department will try to preserve high-tech warfare capabilities while cutting people and platforms and curbing the growth of pay and benefits, according to a budget preview unveiled by Pentagon officials Monday.

Secretary of Defense Chuck Hagel suggested next year’s budget will have historic implications.

“As we end our combat mission in Afghanistan, this will be the first budget to fully reflect the transition DOD is making after 13 years of war — the longest conflict in our nation’s history … The choices ahead will define our defense institutions for the years to come,” he told reporters at the Pentagon.

For Fiscal 2015, the law limits DOD spending to $496 billion — $45 billion less for the year than projected in President Barack Obama’s five-year forecast last year. And the threat of sequestration in future years gives further impetus to making these force adjustments, Hagel said.

“No realistic effort to find further significant savings can avoid dealing with military compensation. That includes pay and benefits for active and retired troops, both direct and in-kind,” Hagel said.

In an effort to slow compensation growth, the Pentagon wants to do the following:

Basic pay for servicemembers would rise by only 1 percent, and pay increases would be similarly limited in future years. Impose a one-year salary freeze for general and flag officers.Cut commissaries subsidy from $1.4 billion annually to $400 million. Overseas commissaries and those in remote locations will continue receiving direct subsidies. The commissary cut will be accomplished not by cutting any commissaries, but essentially by reducing the amount of savings relative to civilian markets that servicemembers enjoy. Those savings will go from about 30 percent to 10 percent, according to a senior defense official. Cut tax-free housing allowance by 5 percent. DOD will also no longer reimburse for renter’s insurance. The BAH cut will be accomplished by letting inflation catch up until servicemembers are at 94 or 95 percent of total housing cost, rather than 100 percent. Increase TRICARE deductibles and some co-pays for some military retirees and some family members of active-duty servicemembers. Medically retired servicemembers, their families, and the survivors of servicemembers who die on active duty would not pay the annual participation fees charged to other retirees, and would pay a smaller share of the costs for health care than other retirees. The proposal does not include any changes to retirement benefits for current servicemembers. DOD is awaiting the results of the Military Compensation and Retirement Modernization Commission, which is expected to present its report in February 2015, before pursuing reforms in that area. DOD continues to support the principle of “grandfathering” for any future changes to military retirement plans, Hagel said.

“I want to make a point that nobody’s take home pay is going to go down under this plan and we are not closing commissaries,” a senior military official said.

Changes in the strategic environment, including the winding down of America’s ground wars along with the need to pivot to the Asia-Pacific and meet new technological challenges from potential adversaries, make certain capabilities more critical than others in a time of relative austerity, according to Hagel.

The military will have to get smaller in order to make the necessary investments in modernization, Hagel said.

“We chose further reductions in troop strength and force structure in every military service, active and reserve, in order to sustain our readiness and technological superiority, and to protect critical capabilities.”

The Army, and to a lesser extent the Air Force, will bear the brunt of the cuts.

In what is sure to be a politically controversial move, DOD will ask Congress for another round of Base Realignment and Closure in 2017.

“I am mindful that Congress has not agreed to our BRAC requests in the last two years. But if Congress continues to block these requests even if they slash the overall budget, we will have to consider every tool at our disposal to further reduce infrastructure,” Hagel said.

Before these changes go into effect, they must be approved by Congress, and there may not be enough political support to get them passed. Many lawmakers are opposed to BRAC because it might entail closing facilities in their districts and hurt the local economy; and they usually oppose cuts to weapon systems that are built by their constituents for the same reason.

Any efforts to curb pay and benefits will face vehement opposition from veterans groups who wield influence on Capitol Hill.

The force plan adheres to the principles of President Barack Obama’s 2012 Defense Strategic Guidance, which effectively rules out large-scale occupations and stability operations, and emphasizes a reorientation to emerging threats in the Pacific (i.e., China’s increasingly sophisticated and growing military capabilities). It also dovetails with much of what senior defense officials have been forecasting about the future of the U.S. military in public forums.

“The Army cuts are about what has been expected for a long time,” said Michael O’Hanlon, a military expert at the Brookings Institution. “The bigger problem is what happens next — if there is sequestration, or deeper cuts ... The Army may need a more realistic paradigm for explaining its force-sizing, rather than trying to hold onto some variant of a two-war capability.”

Winslow Wheeler, a defense expert at the Project on Government Oversight, said proposed Army troop numbers are in line with figures long discussed and that talk of the force going down to pre-World War II levels is alarmist.

“It’s crap,” said Wheeler, noting that the Navy is smaller than it was in World War I and the Air Force is about the size it was when it was formed after World War II. The Army meanwhile, needs to downsize, he said.

Hagel said cutting the force as proposed entails risks and could impede the U.S. military’s ability to respond to multiple crises at the same time.

“A smaller force strains our ability to simultaneously respond to multiple major contingencies. But with the President’s budget our military will still be able to defeat any [single] aggressor,” according to Hagel.

But Hagel said the Pentagon has no choice.

“This is a time for reality. This is a budget that recognizes the reality of the magnitude of our fiscal challenges … There are difficult decisions ahead. That is the reality we’re living with.”

Hagel also warned that training and maintenance accounts will be strained under current spending levels. He said Obama will request an additional $26 billion, beyond the regular defense budget request, for an ‘Opportunity, Growth and Security Fund’ that would enable the Pentagon to spend more in these areas to maintain readiness.

Defense experts said cuts to pay and benefits, though difficult to implement politically, are critical in the current fiscal environment.

“Personnel costs definitely have to be reduced,” Wheeler said.

Congress has added on “outrageous” layers of benefits over the past 15 years for servicemembers in the form of raises, pension perks, and health care costs that are unsustainable, according to Wheeler.

“Those costs have to be brought under control,” he said. Congress needs to get its head straight.”

The Pentagon shares that assessment.

“What we’ve seen in the last decade or so is a fairly steep rate of increase in compensation for our men and women, and that was needed. It was basically a correction for a force that was really underpaid back in the ’90s,” the senior military official told reporters. “And thanks to the help of Congress, we were able to correct that. But if we were to maintain that steep [growth], I think it would be irresponsible.”

Defense officials said the budget proposal entails increased but manageable risk. However, if sequestration continues after 2015 and the deeper cuts outlined in Hagel’s speech become necessary, that will create an unacceptable level of risk and endanger America’s ability to carry out its defense strategy, according to the officials.