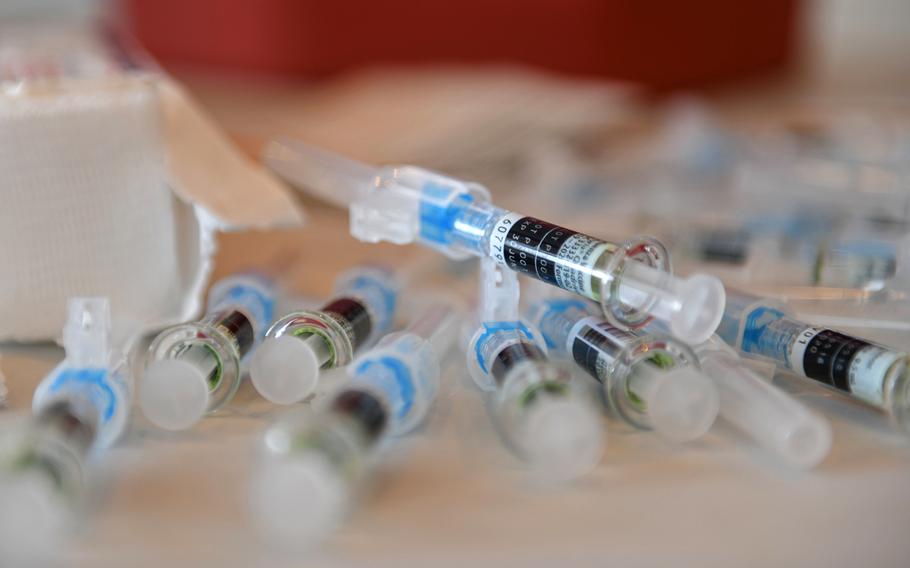 Flu shot vaccinations sit on a table at Aviano Air Base, Italy, Oct. 17, 2019. Europe health providers say that pregnant women should get the flu and whooping cough shots to protect infants. (Ericka A. Woolever/U.S. Air Force )

Military health officials are concerned that pregnant service members may be going without an immunization for a respiratory disease that kills more newborns than any other age group.

A Centers for Disease Control and Prevention report issued this month said that only 55% of pregnant women got the pertussis shot to protect their babies against whooping cough, only half got a flu shot and only about a third received both vaccines.

While no recent figures on immunization rates for service members were immediately available, a 2015 Armed Health Surveillance Center study found similar numbers to the CDC report: only about half received a pertussis shot. The Navy had the highest rate of coverage with 65%.

Health authorities have for years recommended that women in late pregnancy get the Tdap vaccine that protects against pertussis, also known as whooping cough.

The protection is transferred to the fetus and the baby after birth.

Pertussis is a highly contagious bacterial infection that is life-threatening for infants. Its cough causes paroxysms that can break ribs and last months. But it is most dangerous for toddlers and babies, who can’t easily clear thick secretions from their tiny airways.

Two-thirds of infants younger than 2 months old who get whooping cough need to be hospitalized, the CDC says.

“I’ve taken care of some of them,” Coldren said. “They can be very, very ill.”

Outbreaks of the disease tend to occur in cycles. In the U.S. military community in Kaiserslautern in 2005, scores of children were infected; two people had to be hospitalized.

Unlike the flu shot, the pertussis vaccine is not required by policy for pregnant service women.