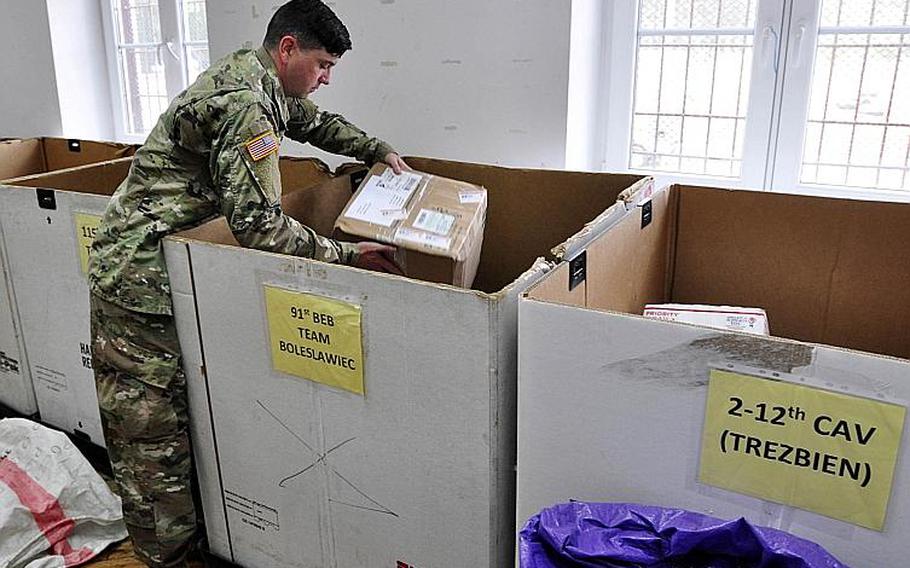 As president of the all-volunteer Operation Yellow Ribbon in southern New Jersey, Silver had tallied postage for thousands of care packages he had sent to servicemembers in Afghanistan and Iraq over the years.

But something was way off on this one.

“I hit enter, and all of sudden I’m looking at $60 postage instead of $30 or so,” said Silver, who assumed there was a glitch in the USPS’s website.

There wasn’t. He subsequently learned it arose from a quiet change made by the USPS that doubled the shipping costs for many Priority Mail packages sent to overseas military addresses.

That roughly translates to an annual postage hike of $50,000 for Operation Yellow Ribbon, Silver said.

“It has totally thrown a curveball at us,” he said of the nonprofit that sent out about 1,900 care packages in 2017. “We know nonprofits that have just shut down and stopped because of it.”

Silver and others have pinned their hopes on a bill introduced in Congress this month that could provide some relief.

For about a half-century, the USPS had used hubs in New York City, San Francisco and Miami to route packages mailed to Army Post Office, Fleet Post Office or Diplomatic Post Office addresses. The cost of mailing to APO, FPO or DPO addresses was uniform, regardless of how many of the USPS’s 10 regional zones a package crossed.

In 2013, the USPS consolidated the processing of packages being sent to APO/FPO/DPO addresses in a single center in Chicago, but the one-zone postage rate was maintained.

In January, the rates for shipping such packages was changed to reflect how many of those zones were crossed.

For an organization based in New Jersey, such as Operation Yellow Ribbon, it has meant paying extra to send through several zones to Chicago.

“The post office went rogue,” said John Couch, one of the co-founders of ShipitAPO, which helps overseas servicemembers receive packages from retailers that won’t send to APO addresses.

Couch had submitted a formal protest over the USPS’s proposed rate change, which he said was “buried” in a notice published in the Federal Register in October 2017.

“I’m representing the military people who are my customers,” he said. “They’re paying me more because I have to pay the post office more. They’re the ones suffering. I make the same amount of money because they pay me a handling fee.”

In a statement provided to Stars and Stripes, the USPS said it receives no tax dollars for operating expenses and must rely solely on postage, products and services for funding.

“Changes to improve our operations are being made so we can reduce costs and remain competitive in the marketplace, to be able to continue to serve the public in the most efficient, cost-effective way possible.”

The USPS offered no financial analysis for the ratio of senders who would pay less or more.

Couch points out that the nation’s population hubs are on the East and West coasts, far from Chicago.

The USPS statement also noted that its flat-rate boxes “are popular and affordable ways to send packages to the troops.” The postage on them ranges from $7.20 for a small box to $17.40 for the large one, and they were not affected by the January rate change.

But using those boxes does not make economic sense for the kind of bulk shipping done by outfits like Operation Yellow Ribbon.

“We send anywhere from $100 to $150 worth of treats and hygiene items,” Silver said. “I can fit six or seven of those [Priority Mail flat-rate] boxes into one of ours.

“We use egg boxes that our supermarket here donates to us. They’re huge. They hold 30 dozen eggs, have handles and can hold up to 50 pounds,” he added.

Earlier this month, Rep. Tom MacArthur, R-N.J., introduced the Care Packages for Our Heroes Act, which would require the same postage rate for all packages going to overseas military addresses regardless of how many zones they cross.

“Care packages provide much needed basic comforts and a morale boost to our servicemembers,” he said in a July 12 news release. “I see letters all the time from men and women in the Armed Services thanking us for the packages and the continued support.”

“We can either try to match what we did last year to keep our productivity up and burn through our cash, spending more each month than we bring in and bringing down our savings every month,” Silver said. “Or we cut back, but then we’re hurting the morale of the brave men and women overseas. We’re trying to walk that fine balance.”