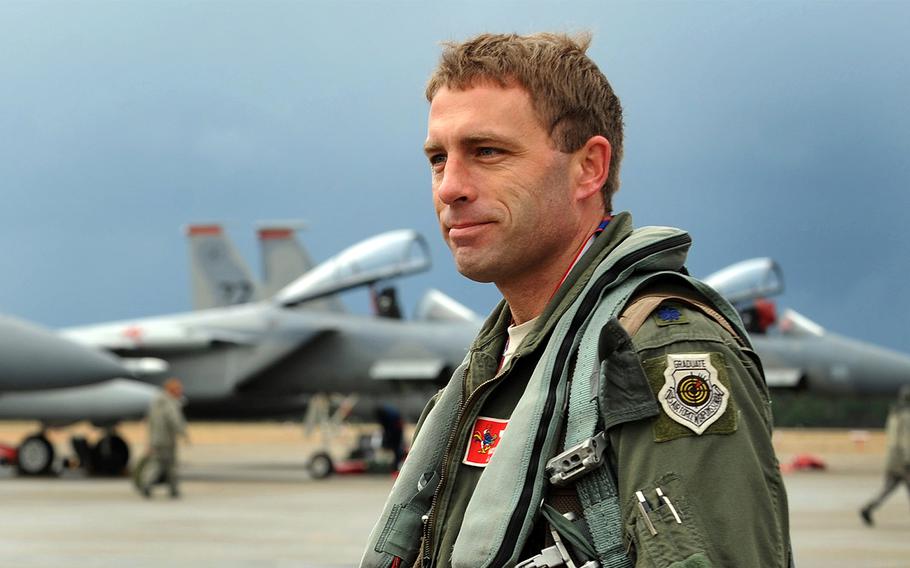 Air Force Lt. Col. Morris Fontenot, the former commander of the 67th Fighter Squadron at Kadena Air Base, Okinawa, looks on at Komatsu Air Base, Japan, on Dec. 7, 2013. Fontenot was killed after the F-15 he was piloting crashed in Virginia on Wednesday, Aug. 27, 2014. (Amber E. N. Jacobs/U.S. Air Force)

WASHINGTON — The Massachusetts Air National Guard has identified the decorated combat veteran killed Wednesday when the F-15C fighter he was flying slammed into a remote, heavily forested part of western Virginia.

"On behalf of the family of our fallen pilot and with a sense of profound sadness, I am sad to share that Lt. Col. Morris "Moose" Fontenot Jr., was killed tragically in Wednesday's F-15 crash," said Col. James Keefe, commander of the 104th Fighter Wing, based in Westfield, Mass. "We all continue to keep the Fontenot family in our thoughts and prayers during this very difficult time."

A 1996 Air Force Academy graduate, he’d most recently served as commander of the 67th Fighter Squadron based in Kadena Air Force Base in Japan, and had been deployed numerous times to the Middle East. His medals and decorations included the Meritorious Service Medal, the Air Medal and the Aerial Achievement Medal.

In a press conference the previous day in Deerfield, Va., near the site of the crash, Brig. Gen. Robert Brooks, Commander of the Massachusetts Air National Guard, said rescuers could tell from the debris at the crash site, described earlier as a “crater” by Virginia authorities, that the pilot remained with F-15 until impact, The Associated Press reported.

"We just found evidence that the ejection seat was with the aircraft,” Brooks said.

He would not comment on whether remains had been found, AP reported, but he said, “We bring every airman home.”

Earlier, several helicopters and a HC-130 with nighttime search capability joined 10 teams of searchers on the ground looking for Fontenot. In all, about 100 searchers were involved, authorities said. The site itself, according to a report in the (Staunton, Va.) News-Leader said the crash site was too “hot” to approach, and there had been a witness statement about seeing a parachute.

Fontenot radioed air traffic controllers about a problem with his F-15C fighter at about 9 a.m. Wednesday while flying at an altitude of between 30,000 and 40,000 feet, Keefe said.

The plane, which Fontenot was flying to Naval Air Station New Orleans for a radar upgrade, went down in the George Washington National Forest minutes later, leaving a sizable crater and a field of debris near a mountain known as Elliott Knob, Virginia police authorities said.

The Air Force later secured the crash site, and representatives from a host of other local agencies were on hand, officials said, including the Virginia National Guard, the Augusta County sheriff and fire officials, the Virginia Department of Game & Inland Fisheries, the FBI and the US Forest Service.

Massachusetts Air National Guard officials said they could not release further details about the nature of the problem with the aircraft or the sequence of events leading to the crash because of an ongoing investigation.