Photos across America: April showers and nature in bloom A gosling peers out from its mother's wings on April 15, 2015, in Santa Clara, Calif. (Marcio Jose Sanchez/AP)

A gosling peers out from its mother's wings on April 15, 2015, in Santa Clara, Calif. (Marcio Jose Sanchez/AP) 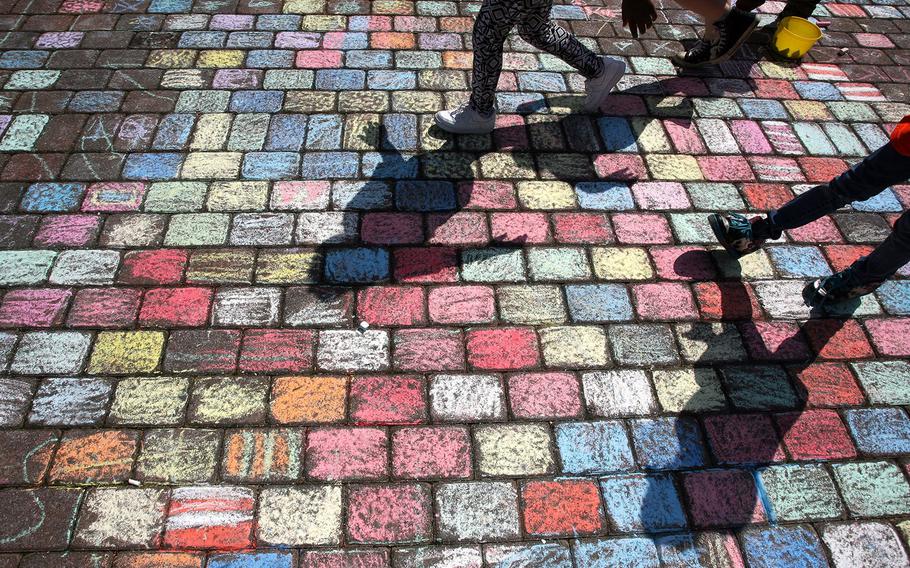 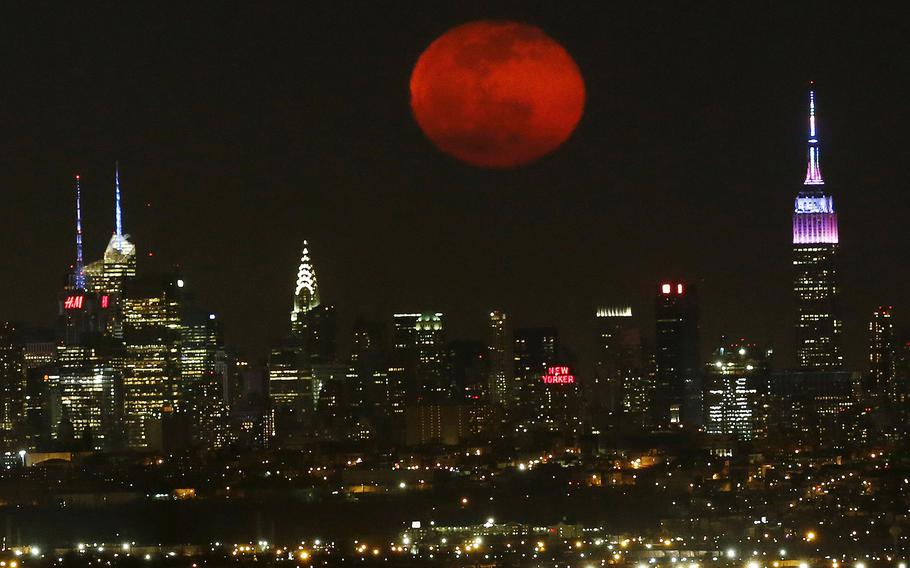 The moon rises in its waning period over the New York City skyline seen from West Orange, N.J., on April 5, 2015. (Julio Cortez/AP) 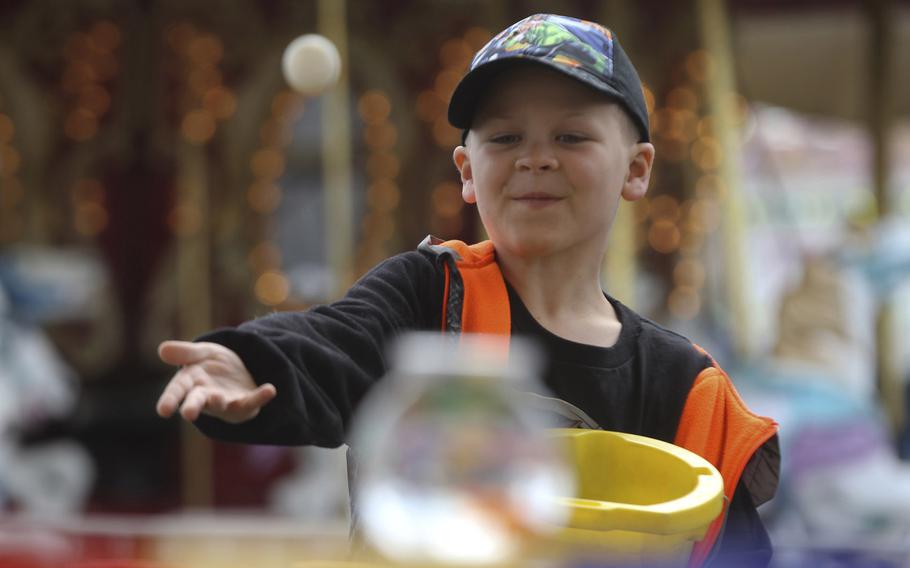 Trenton Havens, 10, tries his luck at the Gold Fish Game at the Midway of Fun carnival at the Mt. Shasta Mall in Redding, Calif., on April 6, 2015. (Greg Barnette, The Record Searchlight/AP) 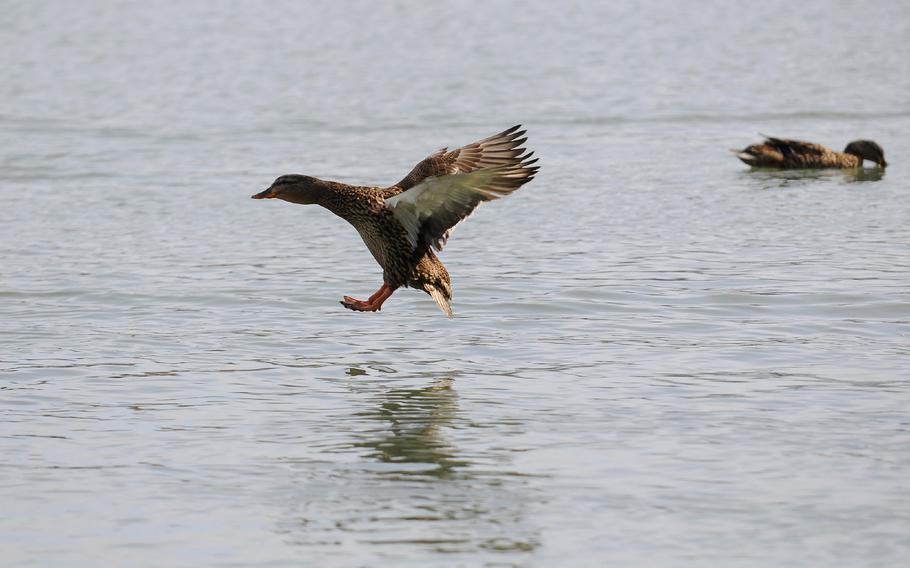 A duck prepares for a landing on Stoyer's Dam at Bubeck Park in Schuylkill Haven, Pa., on March 19, 2015. (Jacqueline Dormer, Republican-Herald/AP) 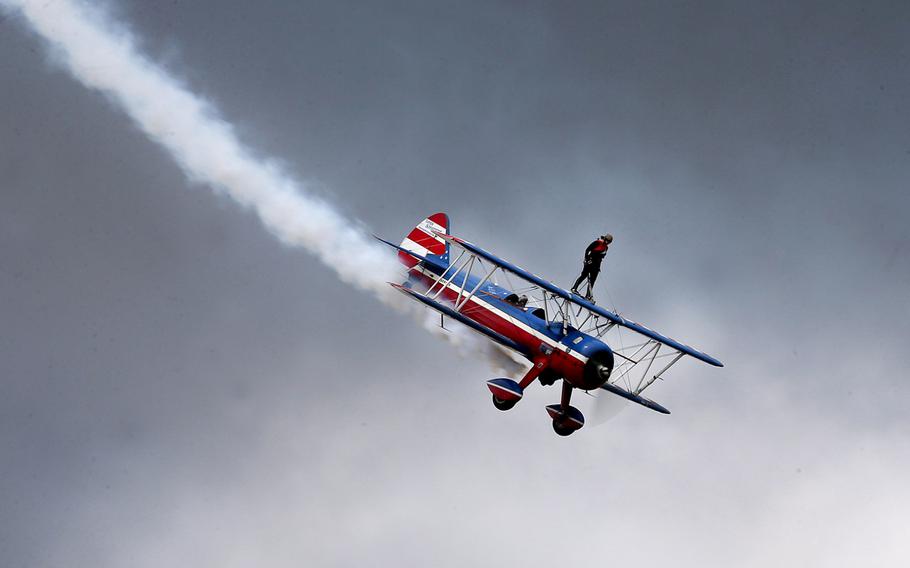 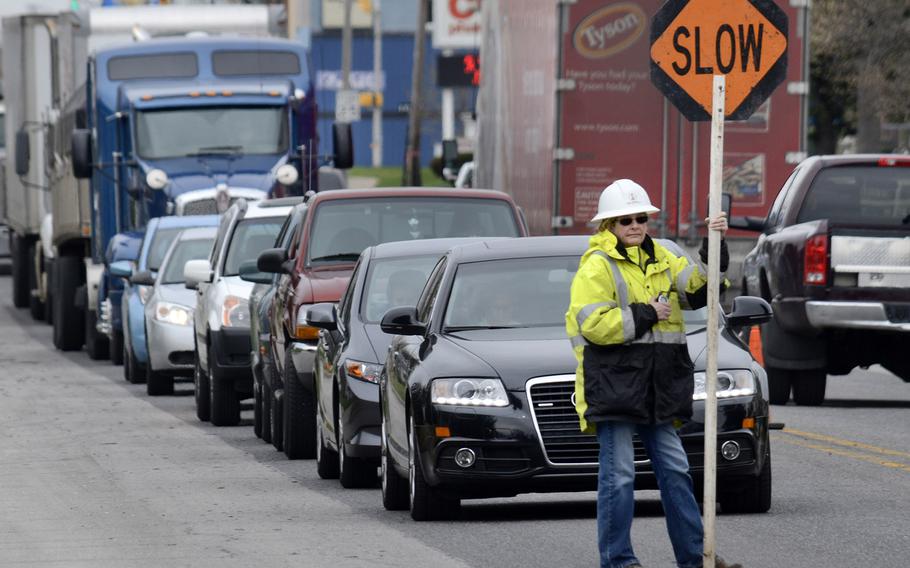 Drivers wait in line for their turn to travel a section of East Main Street restricted to one lane, as road resurfacing work continues on U.S. 35 and Ind. 22 through Gas City, Ind., on April 14, 2015. (Jeff Morehead/The Chronicle-Tribune via AP) 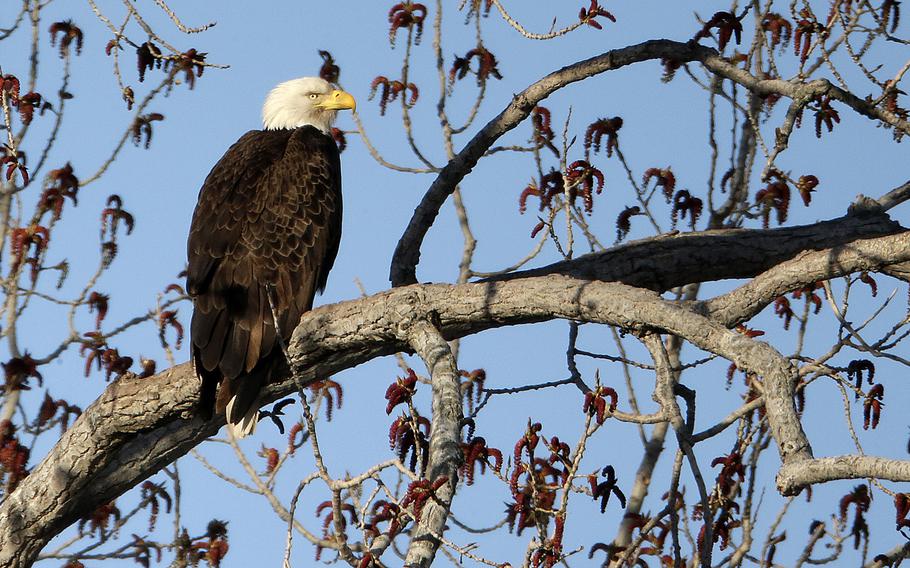 A Bald Eagle surveys the countryside from its nest high above a field on April 4, 2015, near Lawrence, Kan. (Charlie Riedel/AP) 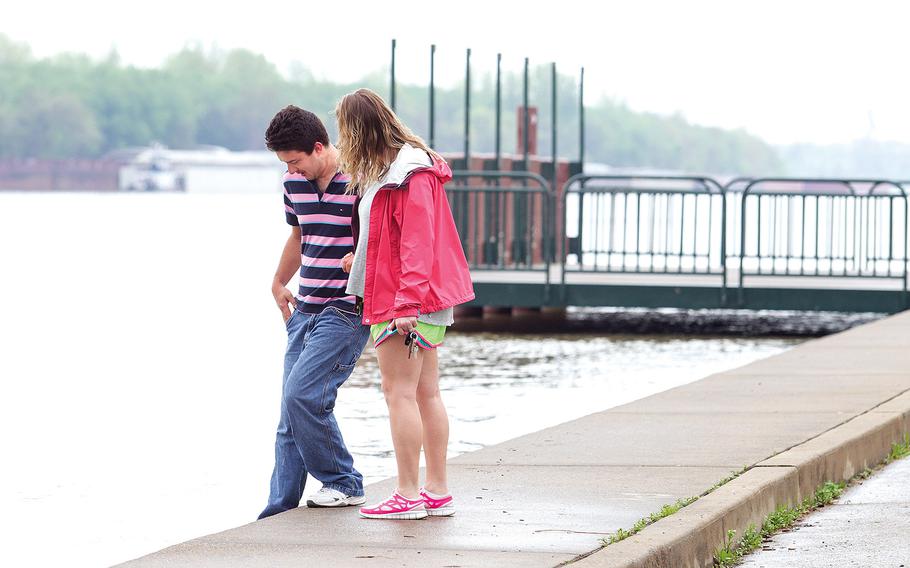 Jacob Sullivan holds on to Elizabeth Gordon as he dips his foot into the water at the Ohio riverfront on April 13, 2015, in Paducah, Ky. The Ohio River in Paducah was measured at 36.62 feet on Monday. At this location the flood stage, when the water level rises enough so that it is considered a flood event, is set at 39 feet. (Ellen O'Nan/The Paducah Sun via AP) 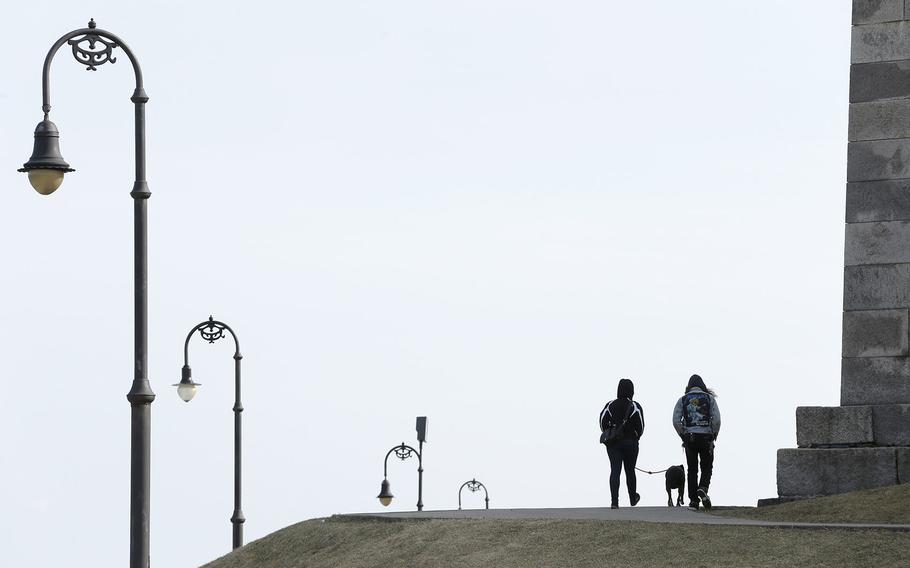 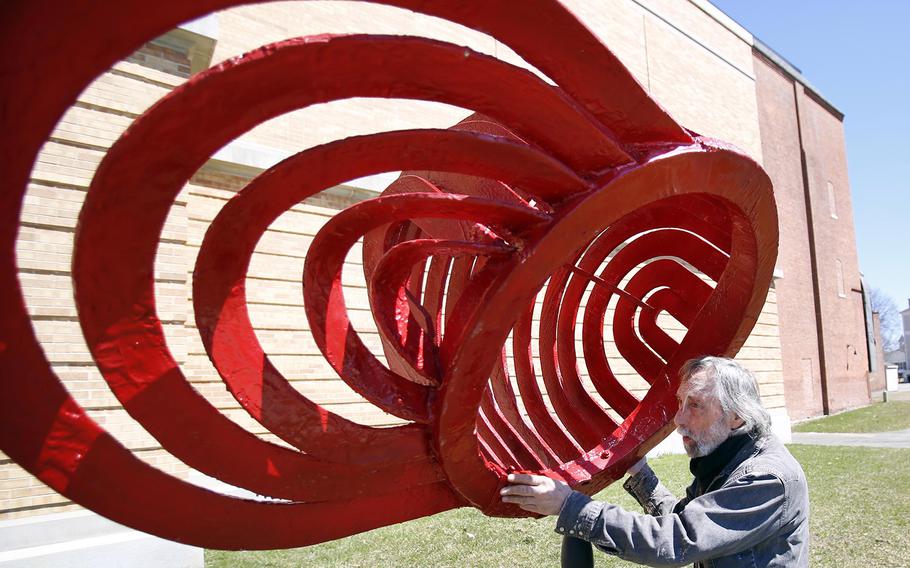 Sculptor Ze'ev Willy Neumann installs his new sculpture titled "Tip of the Hat" outside of the Colonial Theatre on April 15, 2015, in Pittsfield, Mass. The work is one of five new sculptures that will be installed throughout Pittsfield as part of the city's 2015-2016 Artscape exhibit. (Stephanie Zollshan/The Berkshire Eagle via AP) 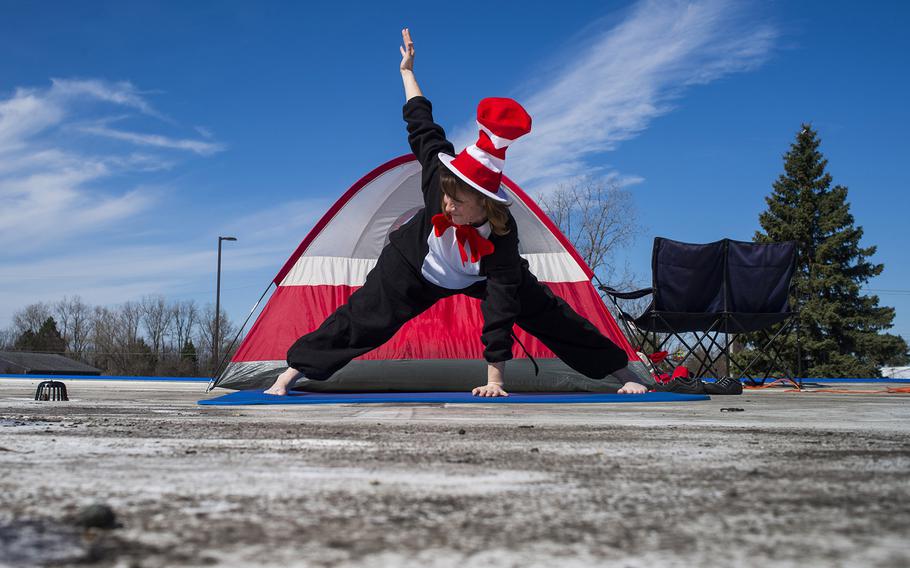 Principal Dianne Coplin performs yoga as she works from atop the school dressed as the Cat in the Hat on April 14, 2015, at Colonel Donald McMonagle Elementary in Mt. Morris Township, Mich. Students at the school read 6,693 books, exceeding their reading month goal of 5,000, resulting in Coplin dressing as the famous Dr. Suess character. (Jake May/The Flint Journal-MLive.com via AP) Leigh Took, a visual effects specialist from the United Kingdom, works on one of the four monumental sculptures that make up "The Four Seasons" being installed on the south lawn of the Nelson-Atlkins Museum of Art on April 14, 2015, in Kansas City, Mo. The sculptures are being installed by a five-member team, who along with artist Philip Haas, originally made the sculptures in Great Britain. Haas' 15-foot-tall sculptures are 3-dimensional interpretations of the Italian Renaissance painter Giuseppe Arcimboldo's portrait series of the same name. (Rich Sugg/The Kansas City Star via AP) 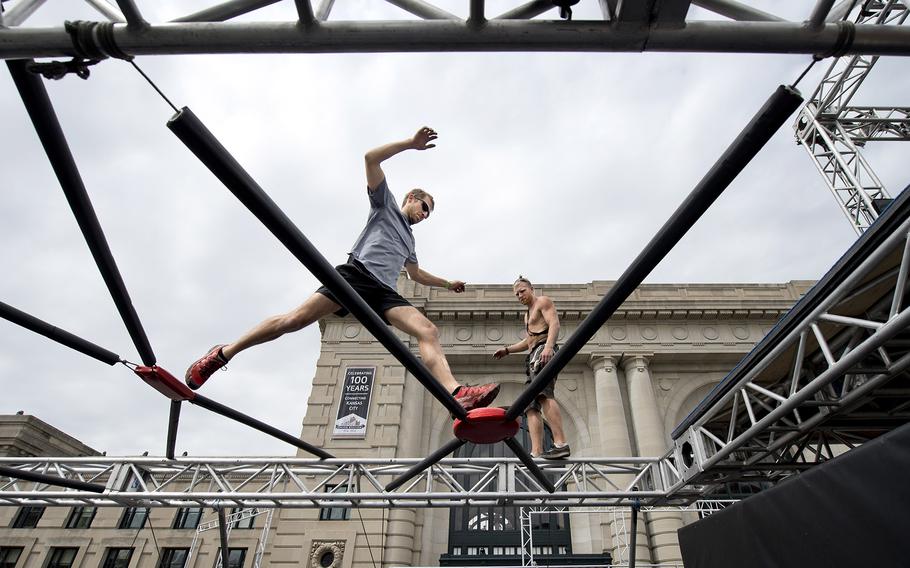 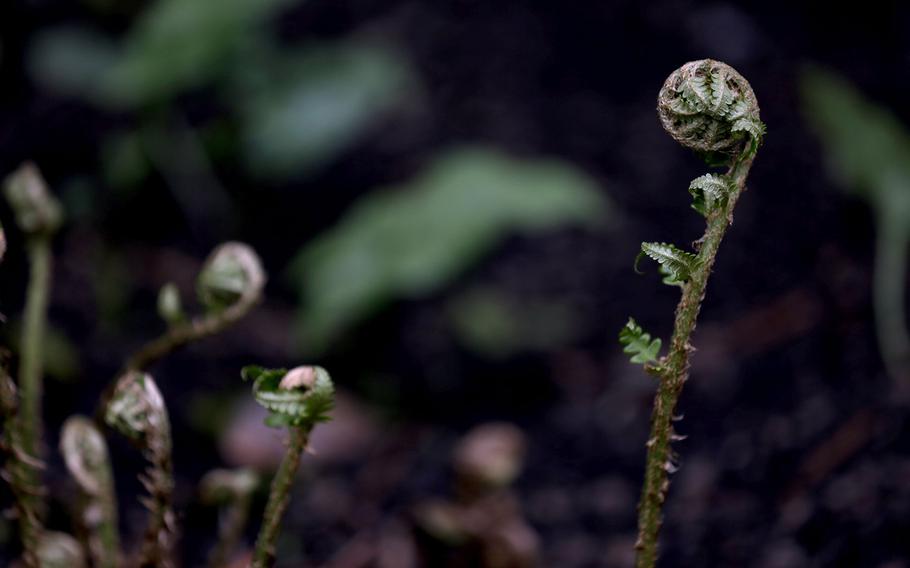 A kayaker maneuvers his way down the snow-melt-swollen Contoocook River on April 12, 2015 in Henniker, N.H. (Jim Cole/AP) Trees and the George Washington Bridge are reflected on accumulated rainwater at Palisades Interstate Park on a foggy day on April 10, 2015, in Fort Lee, N.J. (Julio Cortez/AP) 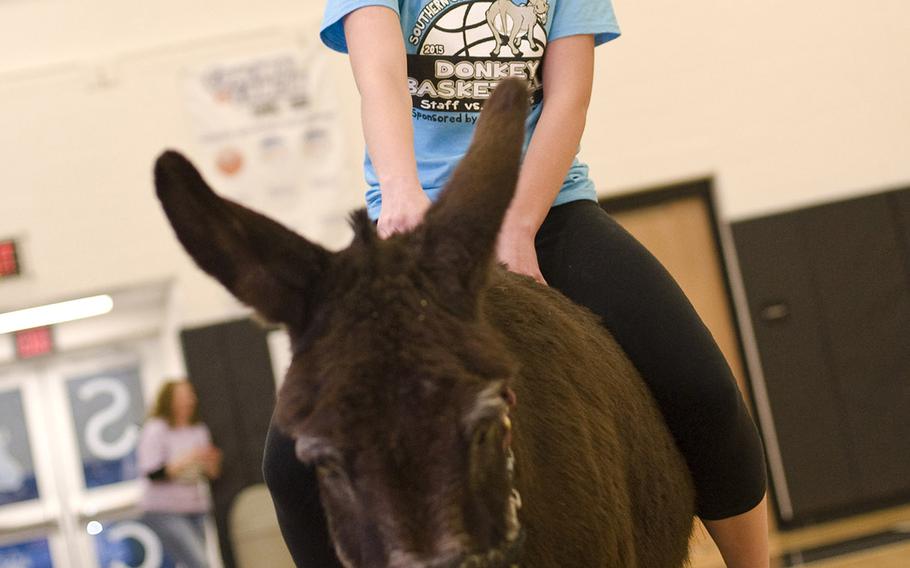 Southern Columbia Area senior Sam Schultz hangs on for dear life while riding a donkey during a game of basketball Thursday, April 9, 2015, in the high school gym near Elysburg, Pa. The comical event featured two teams each of students and teachers in a single-elimination tournament that benefited the class of 2018. (Larry Deklinski, The News-Item/AP) 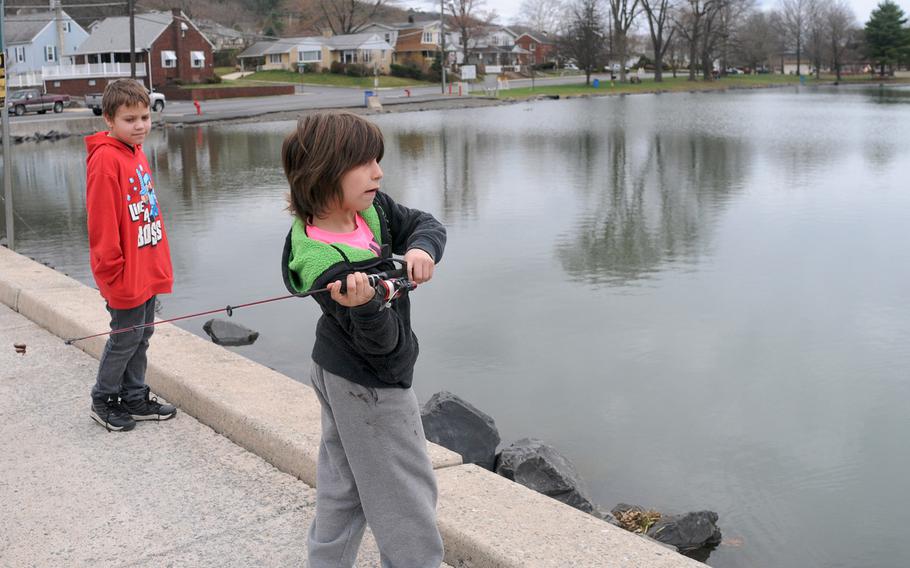 Aiden Roman, left, 9, watches his friend Wyatt Sterner, 10, both of Schuylkill Haven, Pa., cast his line into Stoyer's Dam in Schuylkill Haven, Pa., on April 14, 2015. The boys were fishing for trout that were stocked for the weeklong Scott Shade Trout Rodeo that started on April 11th and runs through the 19th. (Andy Matsko/Republican-Herald via AP) Clark Pratt cheers for a performance by the band Delta Spirit during during the Rhythm N' Blooms Festival on April 10, 2015, in Knoxville, Tenn. (Jessica Tezak, Knoxville News Sentinel/AP) 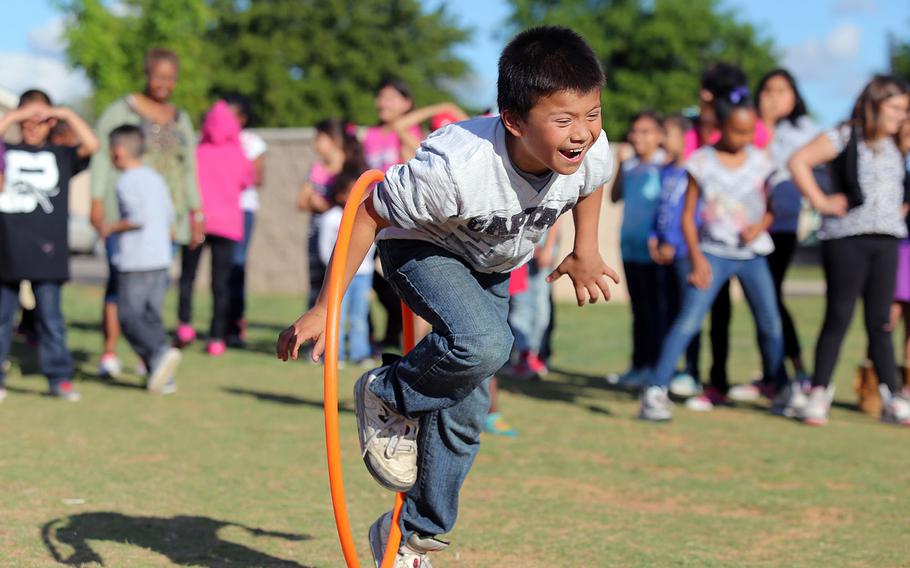 Nine-year-old Alejandro Henderson jumps through a hula hoop during a game on April 14, 2015 at the ROCrageous Sidewalk Ministry at La Promesa Apartments in Odessa, Texas. The sidewalk ministry is an outreach program for Housing and Urban Development housing sites around Odessa which promotes worship and offers a full service while participating in games with the children in the housin areas. (Edyta Blaszczyk/Odessa American via AP) 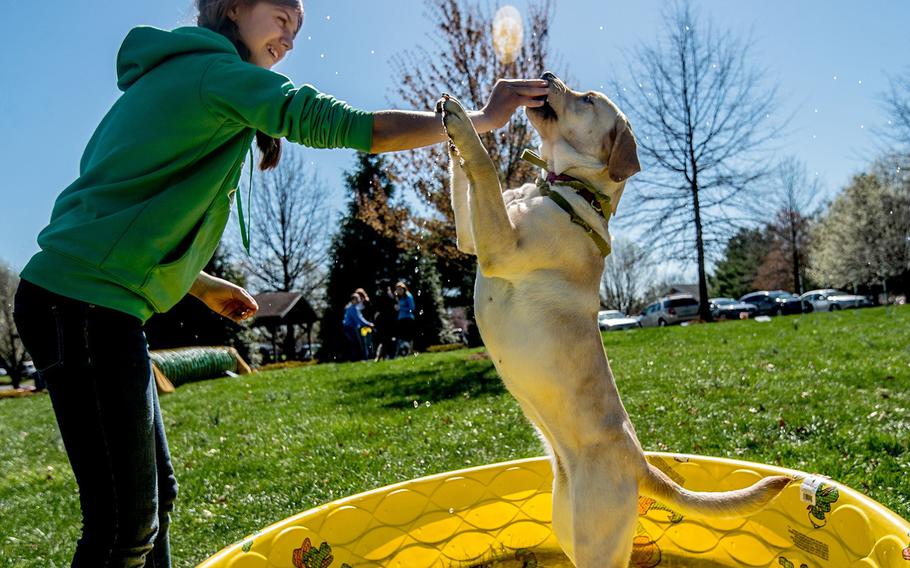 Abby Russell, 12, plays with her dog Haven on April 11, 2015, at the 1st annual PEAK DOG Challenge Event, a fundraiser for PEAK K9s for Kids, where kids and adults with dogs can complete the challenge course in Bridgewater, Va. (Austin Bachand, Daily News-Record/AP) A pedestrian uses an umbrella to take shelter from the rain as they walk down Water Street in Harrisonburg, Va., on April 14, 2015. (Austin Bachand/Daily News-Record via AP) The Blue Mountains are covered in snow on April 14, 2015 in Walla Walla, Wash. (Michael Lopez/Walla Walla Union-Bulletin via AP)

With colorful force, the warming weather of Spring has encouraged active, outdoor life across the United States. From the Gulf Coast Salute Air Show to the sight goslings in in Santa Clara, Calif., enjoy this quick photo tour of American life in April.