Petraeus OK after being rushed from Senate hearing room 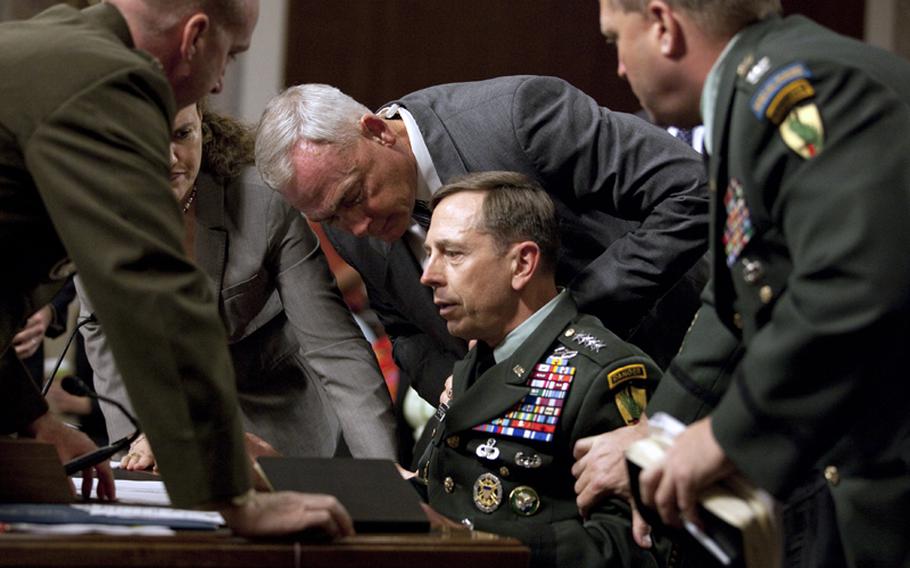 U.S. Central Commander Gen. David Petraeus is surrounded by staff after appearing to be taken ill while testifying before the Senate Armed Services Committee on Tuesday. (Evan Vucci/AP)

WASHINGTON &ndash; Gen. David Petraeus was rushed out of a Senate hearing room after hunching face down over the witness table during a frightening moment amid questioning from Sen. John McCain about 45 minutes into the proceedings Tuesday morning.

McCain was peppering the Central Command commander about the war in Afghanistan when Petraeus could be heard to mumble and slumped so his forehead was on the table. He immediately began to lift his head off the table, but appeared to be disoriented.

Aides rushed to his side and Michele Flournoy, undersecretary for defense, who was also testifying next to him, poured a glass of water. But within seconds Petraeus stood up, looked around and walked out of the room.

The Senate Armed Services Committee hearing was stopped for about 20 minutes, and quickly Sen. Carl Levin and his staff gave assurances the general seemed to have recovered.

&ldquo;Petraeus seems to be doing better. He was having some food and water,&rdquo; said a spokesman for Levin.

When they returned to the room, Petraeus sat down and apologized to the senators saying he felt light headed but, &ldquo;It wasn&rsquo;t Senator McCain&rsquo;s questions, I assure you.&rdquo;

Levin then appeared to surprise the general by saying despite Petraeus&rsquo;s assurances he could continue, the senators would not.

&ldquo;I have consulted with colleagues, we&rsquo;re going to overrule you,&rdquo; Levin said, indicating the committee would try to reconvene at 9am Wednesday.