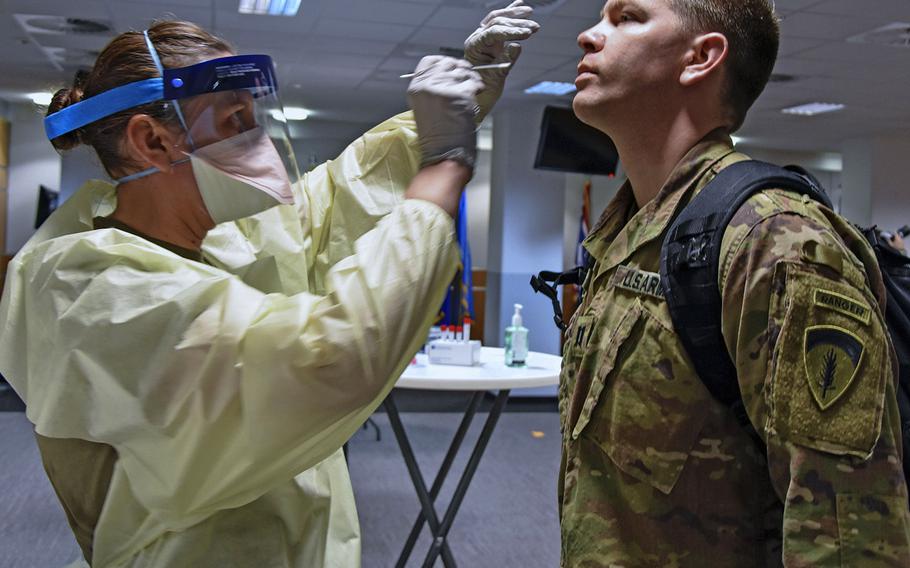 A medical professional from the Wiesbaden Army Health Clinic administers a COVID-19 test to a soldier on June 30, 2020, at the Mission Command Center at U.S. Army Garrison Wiesbaden, Germany. (U.S. Army)

WASHINGTON— The number of coronavirus cases in the military has nearly doubled in the past month and the Army’s cases have now surpassed the Navy in the total number of infected personnel, according to Pentagon data.

The Pentagon reported June 3 that the military had 6,864 cases of the virus. By Wednesday, the number had risen to 12,521. The Navy, which suffered outbreaks on two ships at sea, had the highest number of cases among the services for several weeks. The Army recently surpassed the Navy in cases with 3,836 as of Wednesday to the Navy’s 3,662 cases. Three service members have died since the pandemic began.

As of Thursday, the United States has had more than 2.7 million confirmed cases of the coronavirus and more than 128,000 Americans have died, according to Johns Hopkins University.

The Defense Department is seeing increases in military cases in locations where there has been a rise in civilian cases, Thomas McCaffery, assistant secretary of defense for health affairs, told reporters Wednesday at the Pentagon.

“In Florida, Texas, and Arizona, some parts of California, so that wouldn't be a surprise that we're a part of the community and so where there are some upticks, we’re seeing that as well,” he said.

McCaffery also said the military has increased testing including testing of personnel who are asymptomatic.

As of Monday, 47 states and the District of Columbia have met the Defense Department’s criteria to be a “green location,” which allows for lifting restrictions. Six host nations as well as Guam and Puerto Rico have also made the list. Only Michigan, California, and Florida are not on the list.

Included in that “green location” list are Arizona and Texas, where cases of the coronavirus have risen in recent weeks after the states rolled back restrictions. States that have rising cases will not be taken off the “green locations” list because once a state reaches the criteria to lift travel restrictions, the decisions on how to proceed move to the installation commanders, Lernes Hebert, deputy assistant secretary of defense for military personnel policy, told reporters.

For example, in Texas, the severity of the outbreak in rural areas is different than in metropolitan areas, Herbert said.

“Because we don't want to do wholesale closing down and lifting of travel restrictions, we're going to do it installation by installation,” he said.

Only 70 out of 231 major military installations have met the criteria to lift travel restrictions put in place by the Pentagon due to the coronavirus pandemic, or 30% of major installations, according to a Pentagon document published Thursday.

“What we're seeing is that [service members are] continuing to maintain very high standards with regard to the safety. So the health protection conditions for the majority of the installations out there are still ramped up fairly high,” Herbert said.