Pentagon says 1,200 troops have been mobilized to assist Dorian-ravaged Bahamas 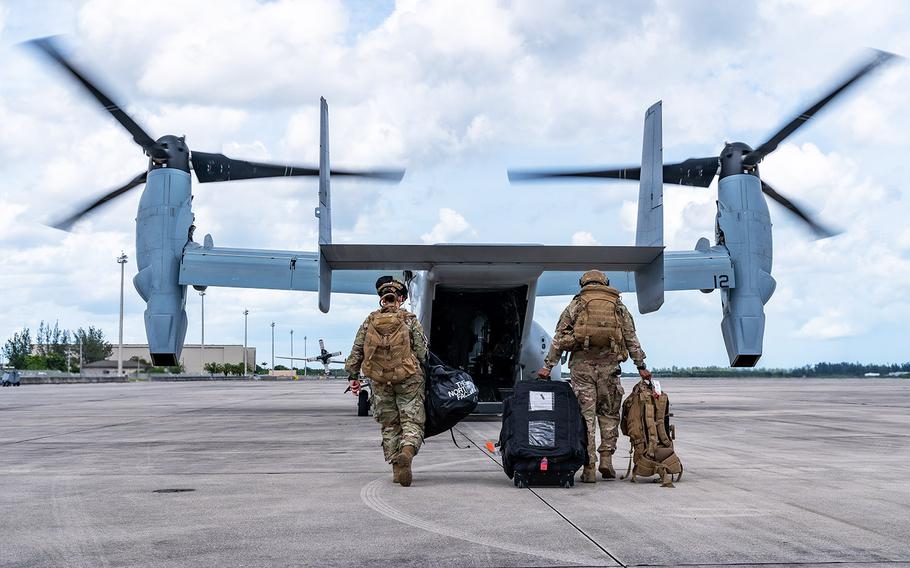 In a September 4, 2019 photo, airmen from the U.S. Air Force's Crisis Response Group board a Marine Corps MV-22 Osprey from the Navy's USS Bataan at Homestead Air Reserve Base, Fla., in support of disaster Relief efforts in the Bahamas. More active duty troops are on their way to the storm-ravaged islands, the Pentagon announced on Monday. (Lionel Castellano/U.S. Air Force)

WASHINGTON — The Pentagon has mobilized about 1,200 active-duty troops to assist the Hurricane Dorian-stricken Bahamas, where the death toll rose to at least 44 on Monday about one week after the Category 5 storm devastated the islands.

The troops — some of whom arrived in the Bahamas over the weekend — have begun a variety of missions, including search and rescue operations and assessing air fields to ensure they could safely receive aircraft loaded with troops, equipment and relief supplies, Jonathan Hoffman, the Pentagon’s chief spokesman, said Monday. The U.S. military might also help with air traffic control for the Bahamas, he said.

Defense Secretary Mark Esper has authorized the use of 20 Army and Navy helicopters in the Bahamas, and the Navy’s USS Bataan, an amphibious assault ship carrying four Marine MV-22 Osprey tilt-rotor aircraft and some 2,000 troops, has been moved south toward the Bahamas to aid in recovery efforts.

The Pentagon could provide additional support for the Bahamas, if the island nation requests it, he added.

Hoffman said the Defense Department had not yet determined the amount of damage Hurricane Dorian had caused on U.S. military bases along the East Coast. He said the services have begun assessing damage in areas impacted by the storm, including in the Carolinas and Virginia.