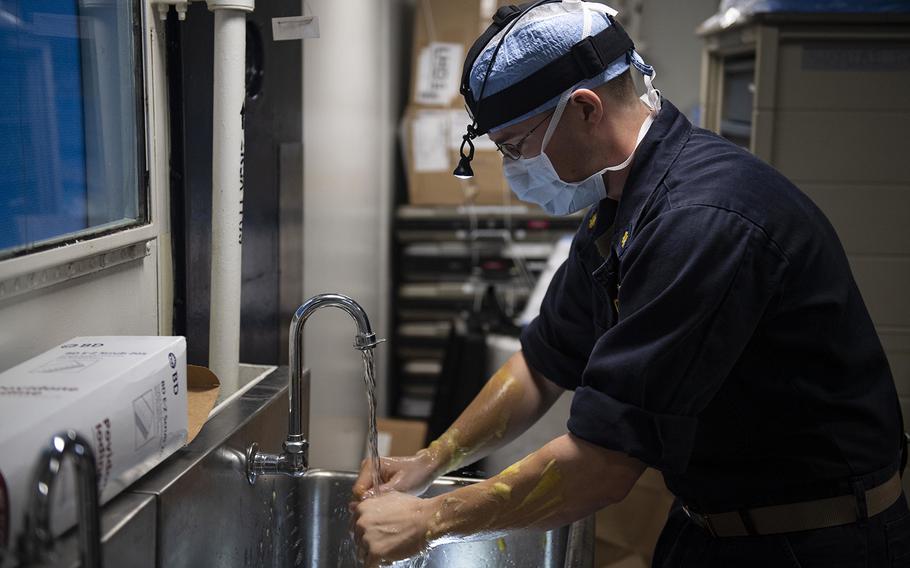 Lt. Cmdr. Justin Miller, a Navy surgeon washes his hands in preparation for surgery outside an operating room aboard the amphibious assault ship USS Wasp (LHD 1) while deployed in the Coral Sea on June 28, 2019. (Jeremy Starr/U.S. Navy)

WASHINGTON — The risk to most Defense Department personnel worldwide of contracting the deadly coronavirus is low, the Pentagon said in guidance issued Friday about the fast-spreading illness, but they should take precautions to avoid getting sick by frequent handwashing and avoiding potentially sick people.

The guidance instructs military troops and other DOD personnel to avoid all unofficial, nonessential travel to China for the foreseeable future, according to a memorandum dated Thursday and signed by Matthew Donovan, the Pentagon’s acting personnel and readiness chief. The coronavirus has infected nearly 10,000 people across the globe, with more than 9,500 confirmed cases in China, where the outbreak began in Wuhan. Chinese officials on Friday reported 213 deaths attributed to the virus, according to The Associated Press.

Because of the “dynamic nature of this outbreak” personnel should frequently check the latest information and precautions issued by the national Centers for Disease Control and Prevention, which is monitoring the outbreak, the memo stated. The Atlanta-based CDC has reported five confirmed cases of the virus in the United States and announced Thursday that the first known case of the virus being transferred in the U.S. to a person. The other cases were individuals who contracted the coronavirus in China.

The World Health Organization on Thursday declared the outbreak a public health emergency of international concern. The disease causes flu-like symptoms such as fever, coughing and, in severe cases, shortness of breath or pneumonia. The military has been monitoring its spread for more than a week, officials said. There have been no reports of U.S. military personnel contracting the virus.

But cases have been reported in areas near U.S. troops. Military officials have said in recent days that individuals with suspected cases of the coronavirus have been reported in Japan near Yokota Air Base, which houses thousands of U.S. sailors and soldiers, and Djibouti, where some 4,000 American troops are stationed in the tiny nation on the Horn of Africa.

"The Department of Defense continues to work closely with our interagency partners as we monitor the situation and protect our service members and their families, which is my highest priority,” Defense Secretary Mark Esper said in a statement issued Friday.

The Pentagon’s guidance said the virus is especially high-risk to people traveling. It instructs personnel to seek medical attention immediately and avoid other people if they have returned from China within the last two weeks or have come in contact with someone potentially infected, “and feel sick with fever, cough, or difficulty breathing.”

The Pentagon provided housing this week to about 200 Americans who were evacuated by the U.S. government from Wuhan. Those individuals on Friday remained in housing at March Air Reserve Base in southern California where they are being monitored for symptoms by Health and Human Services Department personnel. The Pentagon said none of the evacuees would have any contact with any military or civilian DOD personnel on the base. None of those individuals had shown symptoms of the virus as of Friday, according to the AP.