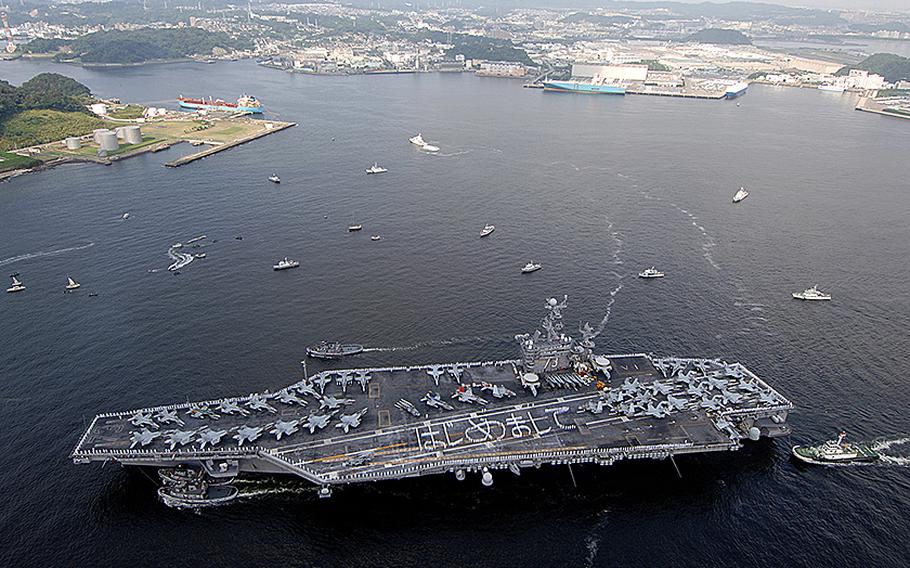 Sailors aboard the aircraft carrier USS George Washington form the phrase "Hajimemashite," which means "Nice to meet you" in Japanese, as they arrive at Fleet Activities Yokosuka, Japan on Sept. 25, 2008. (Clifford L. H. Davis/U.S. Navy)

Sailors aboard the aircraft carrier USS George Washington form the phrase "Hajimemashite," which means "Nice to meet you" in Japanese, as they arrive at Fleet Activities Yokosuka, Japan on Sept. 25, 2008. (Clifford L. H. Davis/U.S. Navy) 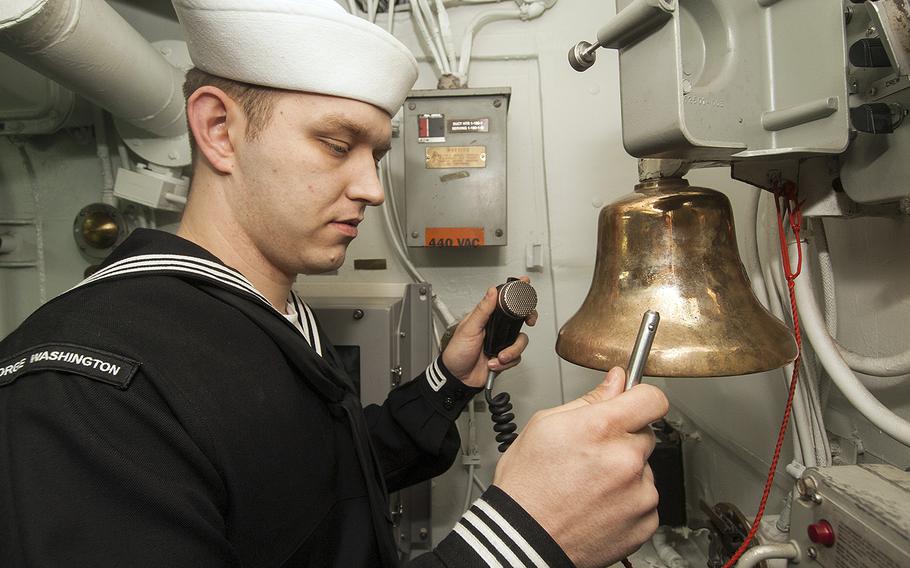 WASHINGTON — The Pentagon will not retire one of its nuclear-powered aircraft carriers after the White House intervened to head off a political fight, the Wall Street Journal reported late Thursday.

The military had proposed mothballing the USS George Washington, reducing the U.S. carrier fleet to 10, to deal with across-the-board spending cuts known as sequestration, imposed by Congress. That irked a bipartisan group of lawmakers, who called on Defense Secretary Chuck Hagel in a letter last week to preserve what they see as a potent symbol of American power.

The behind-the-scenes battle illustrates how politics can complicate the task of wringing savings from the U.S. military budget, the Journal noted. Facing pressures from defense contractors and local communities, lawmakers often oppose cuts to military bases, aircraft and shipbuilding programs and weapons systems.

A 2013 strategic review by Hagel on the impact of the mandated spending cuts found the U.S. could reduce the carrier fleet to eight or nine — still equal the number of carriers operated worldwide by seven other nations.

But it soon became clear that any proposal endorsed by the White House to retire an aircraft carrier likely would have been blocked by Congress, opening Democrats to election-year criticism, officials familiar with the discussions told the paper.

White House officials headed off the issue by telling defense officials in recent days that they would provide extra money — in effect raising the military’s proposed budget — to allow the Navy to extend the life of the George Washington, which was commissioned July 4, 1992. While spending levels are set by Congress, requests such as these from the White House generally are backed by lawmakers.

That makes the cost of maintaining and operating aircraft carriers and their strike groups a tempting target for cuts. Retiring older carriers and reducing operating costs would free up money to invest in modernized weapons and ships, officials told the Journal.

Bryan Clark, a defense analyst at the nonpartisan Center for Strategic and Budgetary Assessments, told the Journal that it makes sense to reduce the fleet by one or two carriers and invest in new submarines or stealthy aircraft and bombers. But he said far more money could be saved by slowing procurement of new Ford-class carriers, which require fewer crew members and can launch planes more quickly, rather than retiring the George Washington 25 years early.

Current plans call for the Navy to build one new carrier every five years, at a cost of about $13 billion each.

Other defense analysts believe the Pentagon should allow the overall size of the fleet to shrink through the retirement of older carriers, but continue to build more modernized carriers. “Once you break the production of carriers,” said David Berteau, a defense analyst with the nonpartisan Center for Strategic and International Studies, “you will not have a carrier industrial base.”