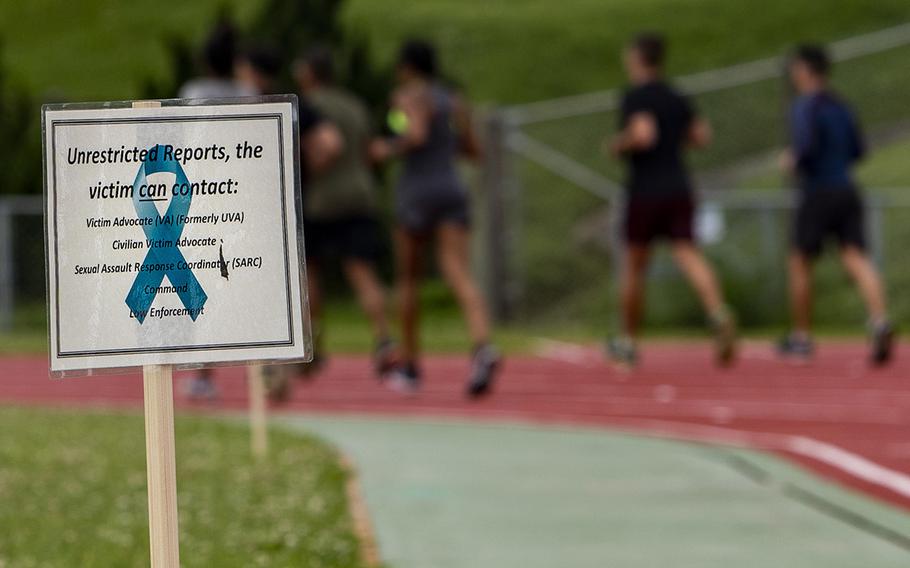 Personnel on Camp Foster, Okinawa, pass a sign in May 2020. The Department of Defense encourages military communities to raise awareness and promote the prevention of sexual violence through special events and public education. (Karis Mattingly/U.S. Marine Corps)

WASHINGTON — The Defense Department has no ability to track exactly how many workplace sexual assaults are reported by its civilian population, according to a new Government Accountability Agency report published amid the military’s high-profile fight against sexual misbehavior among its troops.

The majority of DOD’s 900,000 civilians have fewer means of reporting allegations of sexual misconduct to authorities than their uniformed colleagues, the GAO concluded in its report published Tuesday. The Pentagon also lacks universal tools and guidance across its massive bureaucracy to fully track reports of sexual assault or harassment involving its civilians, according to the Congress-mandated report.

“Without guidance that addresses these areas, DOD does not know the extent to which its civilian workforce has reported work-related sexual assault worldwide,” GAO concluded.

The Pentagon, under pressure to act from Congress and others, has taken great strides in recent years to attempt to track every report of sexual assault among its uniformed troops. But it does not track sexual assault cases involving most of its civilians in its centralized database, called the Defense Sexual Assault Incident Database, or DSAID. It also doesn’t mandate that its components — like agencies outside of the military services — track such occurrences.

“Limited guidance on tracking reported incidents hinders DOD’s visibility over such incidents,” the GAO report read. “Moreover, not all DOD components have access to the department’s centralized database for the collection and maintenance of information regarding reported sexual assaults, which limits visibility.”

In fiscal year 2018, for example, the Defense Department estimated that nearly 6% -- about 49,700 -- of its civilians experienced sexual harassment at work and about 2,500, or about 0.3%, experienced workplace sexual assaults that year, based on employee surveys. But the DOD tracked a total of only 370 civilian work-related sexual assaults through official channels during the five-year period from 2012 to 2019.

GAO issued 19 recommendations to the Defense Department to correct the problems, including issuing common guidance across the department to allow for comprehensive tracking of work-related sexual assaults involving its civilians, enhancing its anti-harassment training programs for civilian workers, and conferring with Congress about expanding civilians’ avenues for reporting sexual assaults.

Among GAO’s recommendations for the Pentagon: to improve its reporting practices in DSAID to ensure certain categories of civilian workers were properly tracked. For example, military dependents, such as spouses, who are DOD civilian employees and report sexual assault are often entered into the system only as dependents.

Another issue: Because the Pentagon limits the ways U.S.-based civilian employees can report allegations of sexual misconduct, most cannot be automatically entered into DSAID.

“A Victim Reporting Preference Statement is needed to enter a sexual assault incident into the DSAID database, but only those eligible to file an unrestricted report can file that statement,” GAO reports.

Only service members, their adult dependents, civilian employees stationed outside the United States and Air Force civilians can file a Victim Reporting Preference Statement, which indicates whether they want to make a restricted or unrestricted report. A restricted report is submitted confidentially and does not trigger a criminal investigation. An unrestricted report launches an official investigation into an incident and provides the alleged victim access to several avenues for support, including counseling and legal and advocacy services.

Most U.S.-based civilians’ only avenue to report sexual misconduct is through one of the military’s three investigative services, the Army’s Criminal Investigation Command, the Naval Criminal Investigative Service or the the Air Force Office of Special Investigations, the GAO said. Civilians can also report such allegations to local or other federal law enforcement. Typically, a military investigative organization would not probe allegations of sexual assault involving civilian workers not on a military post, even if the assault occurred during a work-related function. Thus, the Pentagon would not have any ability to internally track that case.

The GAO found some DOD agencies were tracking civilian reports of sexual assault independently, including the Defense Intelligence Agency and the Defense Logistics Agency. Those agencies are not bound by policy to track such incidents, GAO said.

However, those agencies also do not have access to DSAID to report their own cases or to determine whether any of their civilian workers accused of sexual misconduct had been implicated for similar offenses while working for other DOD components.

“Officials from the Defense Intelligence Agency and the Defense Logistics Agency stated that access to DSAID would be helpful to more effectively track and have oversight over reported sexual assaults involving their employees,” the GAO said. “However, since [Pentagon officials have] not granted them access to DSAID, they continue to track such incidents independently.”