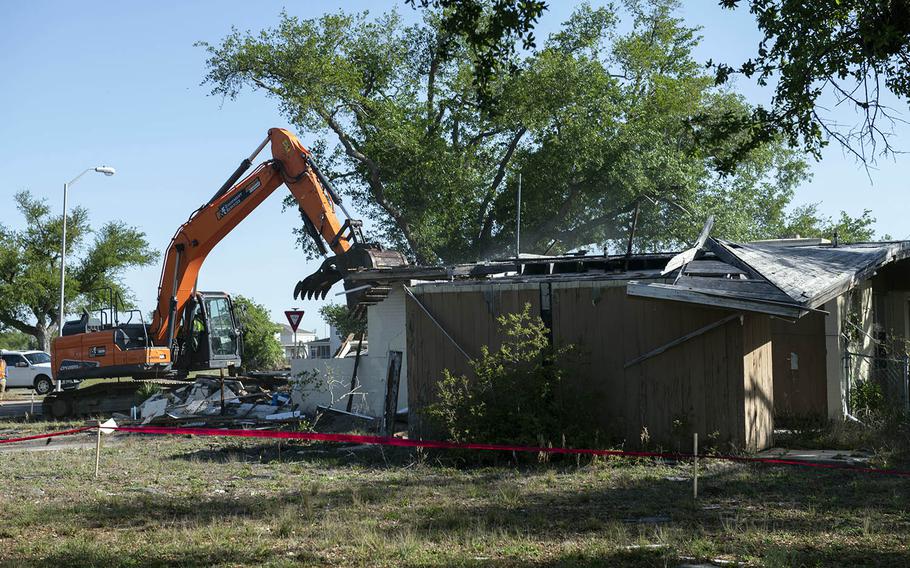 An excavator demolishes a house at Tyndall Air Force Base, Fla., April 1, 2021, that was severely damaged by Hurricane Michael in October 2018. (Tiffany Price/U.S. Air Force)

The Defense Department announced Thursday it would complete assessments of climate-related hazards to all major installations in the continental United States within 12 months.

It set a goal of completing similar assessments at all major installations outside the U.S. within two years, the Pentagon said in a news release.

The announcement dovetailed with President Joe Biden’s Leaders Summit on Climate on Thursday, a virtual gathering during which he pledged America would cut emissions by at least half of 2005 levels by 2030.

Defense Secretary Lloyd Austin has brought a new sense of urgency to addressing climate change as a national and global security issue.

“There is little about what the Department does to defend the American people that is not affected by climate change,” he said in a statement Jan. 27. Austin was moving at the White House’s direction to assess the impacts of climate change on the Pentagon’s security strategies, operations and infrastructure.

Speaking at the summit Thursday, Austin said, “From coast to coast and across the world, the climate crisis has caused substantial damage and put people in danger, making it more difficult for us to carry out our mission of defending the United States and our allies.”

DOD will use its Climate Assessment Tool, which was launched in September by the undersecretary of defense for acquisition and sustainment, as a means of evaluating risks to the roughly 5,000 Defense Department sites worldwide.

The tool combines data from past extreme weather events, such as hurricanes and tornadoes, with projected future changes – for example, in sea level and average temperatures – to produce “hazard indicators,” according to DOD.

The announcement Thursday is a single step in a much longer road ahead, said John Conger, director of the Center for Climate and Security, a Washington, D.C.-based nonpartisan institute that promotes climate resiliency.

“This climate exposure assessment is the first step in the process,” Conger told Stars and Stripes in a phone interview Thursday.

The National Defense Authorization Act for fiscal year 2020 requires DOD to create a climate resilience plan for each installation that, among other things, must document specific vulnerabilities based on geography, its missions and its level of dependency on outside civilian infrastructure, Conger said. Those findings must be incorporated into each site’s master plan, he said.

“So, every base’s specific vulnerability is going to need to be addressed, and that’s a problem that is bigger than what they announced today,” Conger said. “Exposure assessment is one step, but to fully assess the vulnerability and identify resilience measures is a bigger task.”