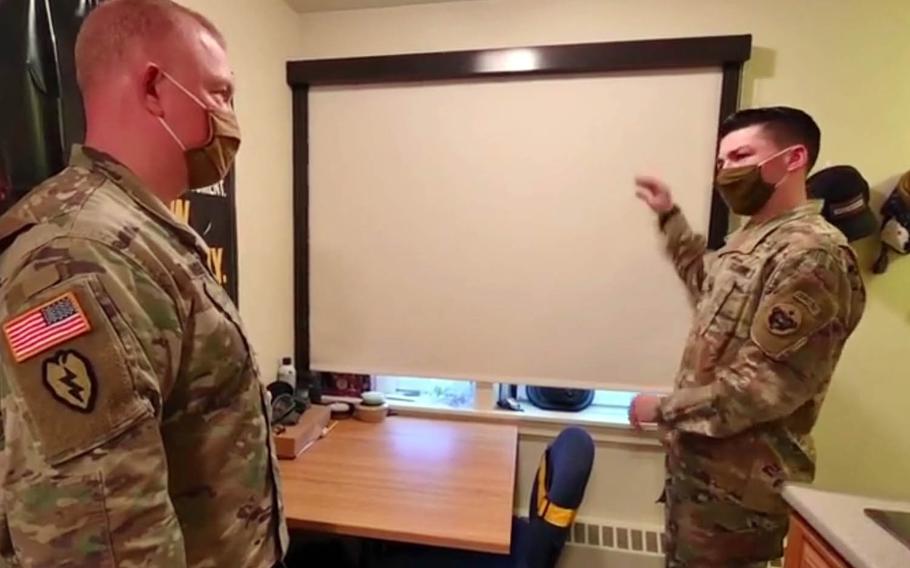 A soldier at Fort Wainwright, Alaska, talks about a blackout shade in his living quarters with Col. Adam Lange, deputy commander for sustainment for U.S. Army Alaska, in this video screenshot. (U.S. Army)

A $1.24 million project to install blackout shades on all soldiers’ barracks at Fort Wainwright in Alaska is mostly complete, the Army said Tuesday.

The project is among efforts to reduce the risk of soldier suicide by improving overall quality of life.

“We did beat our timeline goal of getting shades installed in all of the facilities that are occupied by soldiers,” Col. Adam Lange, U.S. Army Alaska’s deputy commander for sustainment, said in a video posted Tuesday on Facebook.

Only a couple of barracks on the Fairbanks base do not have shades yet because they are under renovation, he said.

Soldiers stationed at Joint Base Elmendorf–Richardson – the Army-Air Force installation in Anchorage – will also be getting the shades, Lange said.

“Working with our Air Force counterparts, they’ve agreed and plan to install 400 sets of blackout shades in those facilities that don’t already have them down at the Fort Richardson side of Joint Base Elmendorf–Richardson,” he said.

Fort Wainwright is less than 140 miles south of the Arctic Circle, a location that experiences long, dark days in the winter and seemingly endless daylight in the summer.

Fairbanks gets about 22 hours of sunlight a day during the height of summer in mid-June. For some individuals, the incessant sunlight interrupts the body’s circadian rhythm that regulates sleep and wakefulness, which can affect mental health.

Blackout shades are among several initiatives undertaken by the Army to improve quality of life for soldiers stationed in Alaska, an effort sparked in large part by a spike in suicides in recent years.

In 2019, a team from the U.S. Army Public Health Center's Behavioral Health and Social Outcome Program conducted a study at Fort Wainwright after five soldiers died by suicide between May 2018 and April 2019.

The researchers found multiple factors contributed to the risk of soldier suicide, including chronic pain, inadequate sleep and distress over personal relationships.

Almost a third of soldiers surveyed told researchers they suffered from sleeplessness; about 40% of them pointed to extended daylight hours as the cause, the Army said in a news release in early 2020.

The first priority in installation had been barracks needed by soldiers redeploying last year from Iraq and Syria, he said.

Troops from the 1st Stryker Brigade Combat Team, 25th Infantry Division, returned in May after a nine-month deployment in support of Operation Inherent Resolve.

In the video, Lange visits the living quarters of two soldiers who have been stationed at Wainwright long enough to have experienced barracks life with and without blackout shades.

“Sir, let me tell you, it was rough,” said one soldier of pre-shade life, demonstrating for the colonel how the sliding blind works in her small room. “It’s not easy – not easy without these things.”