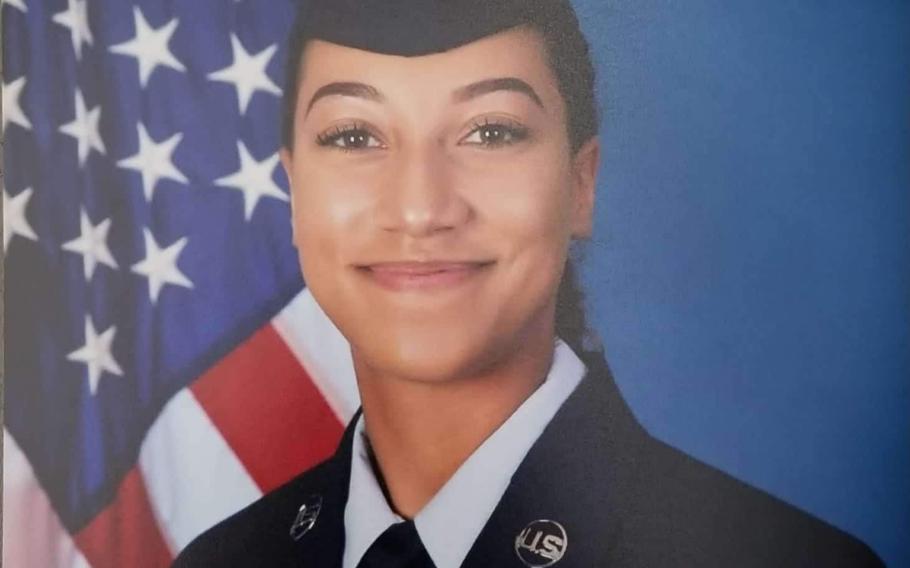 Natasha Aposhian, a 21-year-old from Phoenix, Ariz., was just beginning her Air Force career at the North Dakota base, her parents Brian Murray and Megan Aposhian said Tuesday in a statement about their daughter’s death. (Aposhian family)

The parents of one of the two airmen killed in a shooting Monday at Grand Forks Air Force Base, N.D., said their daughter was the victim of domestic violence.

Natasha Aposhian, a 21-year-old from Phoenix, Ariz., was just beginning her Air Force career at the North Dakota base, her parents Brian Murray and Megan Aposhian said Tuesday in a statement about their daughter’s death.

"We’re torn apart by the loss of our daughter to a senseless act of domestic violence," they wrote. "Natasha had recently joined the Air Force and was just starting to embark on a career serving her country. It’s a tragedy she won’t get to fulfill her hopes and dreams. We ask that you pray for her, our family and the countless victims of these crimes.”

Officials at the base have not yet released the names of the airmen involved in Monday’s shooting and the family did not identify the second victim or the person’s relationship to their daughter.

Both shooting victims were members of the 319th Reconnaissance Wing, according to a news release Monday from the base.

The shooting occurred at about 4:30 a.m. in a dormitory on the base that primarily hosts single, enlisted airmen early in their military careers, said Staff Sgt. Elijaih Tiggs, spokesman for the wing. Officials made mental health care specialists available at the base for anyone impacted by the shooting.

No other information or details about the incident have been released.

Grand Forks AFB is located in eastern North Dakota, about 80 miles south of the U.S.-Canada border. It houses the 319th Reconnaissance Wing, an intelligence, surveillance and reconnaissance unit, which primarily operates RQ-4 Global Hawk drones for commanders around the world, according to the Air Force. It also supports U.S. Customs and Border Protection officers who fly unarmed MQ-9 Predator drones from Grand Forks AFB.

The Family Advocacy Program is a Defense Department initiative designed to address domestic abuse, child abuse and neglect, and problematic sexual behavior in children and youth. For information about how to report and prevent domestic violence to go: https://www.militaryonesource.mil/family-relationships/family-life/preventing-abuse-neglect/the-family-advocacy-program.