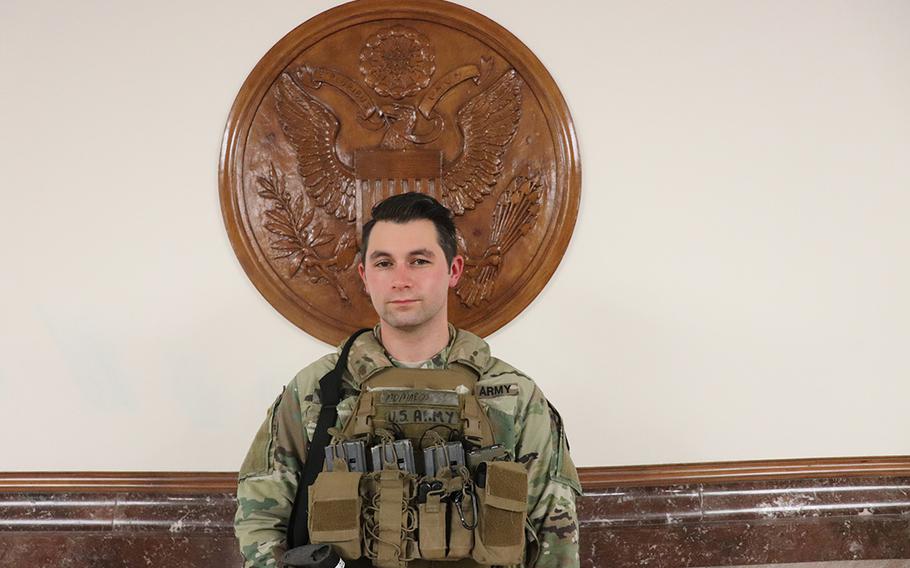 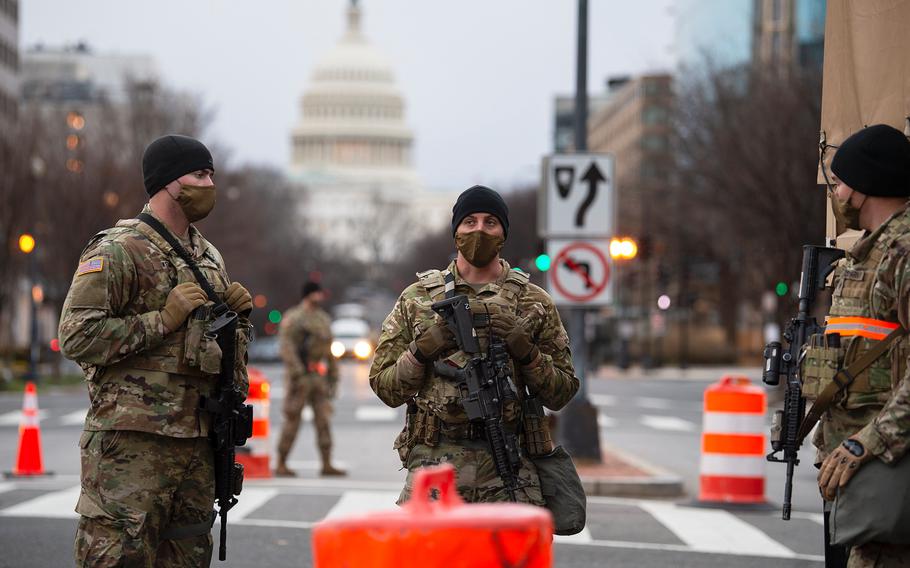 Members of the Pennsylvania National Guard's 2nd Battalion, 112th Infantry Regiment help provide security at a check point on New Jersey Ave. on the North side of the U.S. Capitol in Washington D.C., on Saturday, Jan. 16, 2021. (Carlos Bongioanni/Stars and Stripes)

Baltimore firefighter Ryan Marani was preparing for work Jan. 6 when he saw the news – the U.S. Capitol had been overtaken by a mob. As a specialist with the Maryland National Guard, he knew the call was coming.

Marani grabbed his rucksack, already filled with enough gear to last 72 hours. He added more, while making arrangements to leave home for an unknown amount of time. Eventually, the call came – Marani’s unit, Charlie Company of the 1st Battalion, 175th Infantry Regiment, was deploying to Washington to defend the Capitol.

Marani coordinated his absence with the fire department, he made accommodations for his cat and he postponed a planned home renovation project.

Most importantly, he called his 2-year-old son, Noah, to say goodbye. Marani deployed for six months with the National Guard earlier this year to assist with coronavirus response and, as a firefighter, he has often been forced to isolate because he comes into contact with the highly contagious disease. Since March, the father and son haven’t spent much time together.

“I hope when he’s older, he can look back at this page in history and know that his father mattered in some moment, even if it was only brief,” Marani said Friday from the Capitol, where he is one of about 800 Maryland National Guard soldiers assisting the U.S. Capitol Police to secure the building.

Last week, supporters of President Donald Trump marched on the U.S. Capitol following his speech outside the White House that reiterated claims of a stolen election. A mob of Trump supporters attacked police and broke into the Capitol Building and vandalized it, and sent congressional lawmakers into lockdown. The riot delayed Congress from the official certification of President-elect Joe Biden’s election victory, but lawmakers returned hours later and approved the election results.

The hourslong siege of the Capitol resulted in at least five deaths, including a Capitol police officer who was injured during the melee.

In total, the Defense Department has authorized up to 25,000 National Guard troops from all 50 states and three territories to ensure a peaceful transition of power Wednesday when Biden is inaugurated.

“They’re not Batman. They don’t have their Batsuit in the car,” said Brig. Gen. Adam Flasch, director of the joint staff of the Maryland National Guard, when describing the time it takes to get members of the Guard activated on immediate orders. He was in a meeting Jan. 6 to discuss the Guard’s role in distributing the coronavirus vaccine in Maryland, when his phone began buzzing with notifications of the riots.

Flasch immediately began coordination with the office of Maryland Gov. Larry Hogan to determine support levels and distribute orders down the chain of command.

“As a soldier who’s been doing this for 32 years, I continue to be amazed at the patriotism and unmatched quality that our Guard men and women bring to our nation. The unsung heroes in my opinion are these ladies and gentlemen, but also their employers and families who shoulder the burden of the daily life that they have to leave behind to make a difference in our community.”

In the moments before Marani got his notification to activate, his company commander Capt. Bradley Dmuchowski was balancing his own civilian and military duties.

Dmuchowski was in the middle of preparing dinner when he learned he had to get a portion of his company assembled to be in Washington the following day. He began contacting troops and weighing the various reasons they could or could not be ready, determining what exactly soldiers should pack and identifying the logistical requirements of the troop movement and mission.

He’s also a civilian with the Guard, having worked the past two years as executive officer of the cyber division at the National Guard Bureau in Washington. But, the day before he’d accepted a job offer with the Defense Department’s Cyber Command, so he had to call them to bump back his start date. Then Dmuchowski said goodbye to his 2-year-old daughter Evelyn. He has spent about nine months deployed since the start of the coronavirus pandemic.

“It was tough to say goodbye to my daughter, especially with what was going on at the Capitol and the scenario that we were potentially walking into,” Dmuchowski said. “Any time the military gets mobilized for support of civil authorities, there is some risk and to be mobilized so quickly leaves your family reeling. I feel for all my soldiers. I feel that pain personally.”

The National Guard has seen historic levels of deployments in the past year, beginning in March with the coronavirus pandemic. Another wave of Guard deployments followed in the summer months as protests ignited in the wake of the police killing of George Floyd in Minneapolis. These topped more typical yearly missions such as wildfires, hurricanes and overseas deployments.

In June, about 120,000 Guard members were engaged worldwide, according to the National Guard Bureau.

The first days in the Capitol were challenging, Dmuchowski said, as logistics were sorted out. Meanwhile, social media filled with images of troops sleeping on the floor as lawmakers and their staff in suits and heels navigated through the uniformed troops.

They’ve since gotten hotel rooms, but some missions continue to require they spend multiple days in the building, Dmuchowski said.

“I told my soldiers the other night, ‘We have an important part in the democratic process right now. We are ensuring our lawmakers and politicians continue to function in the way they should and we are protecting their lives and the infrastructure they exist in and work in. It just so happens this called us to their doorsteps and their hallways,’” he said. “Protesters come out and they’re here to have their part in the democratic process as well. We at the National Guard are not here to do anything but support and defend every American doing their part in the political process.”

Marani hadn’t been to the Capitol since he was a child. Returning to secure it has been a strange way to see the building again. Even during missions, he said he can’t help but be in awe of what it represents, and it makes sleeping on the floors not so bad.

He imagines once his son gets older, he’ll bring him here to tell the story of the time he protected its halls.

“I’ll say, ‘Your dad was here back when this happened’,” Marani said. “I hope that it will maybe inspire him to be the fourth generation to join [the military].”