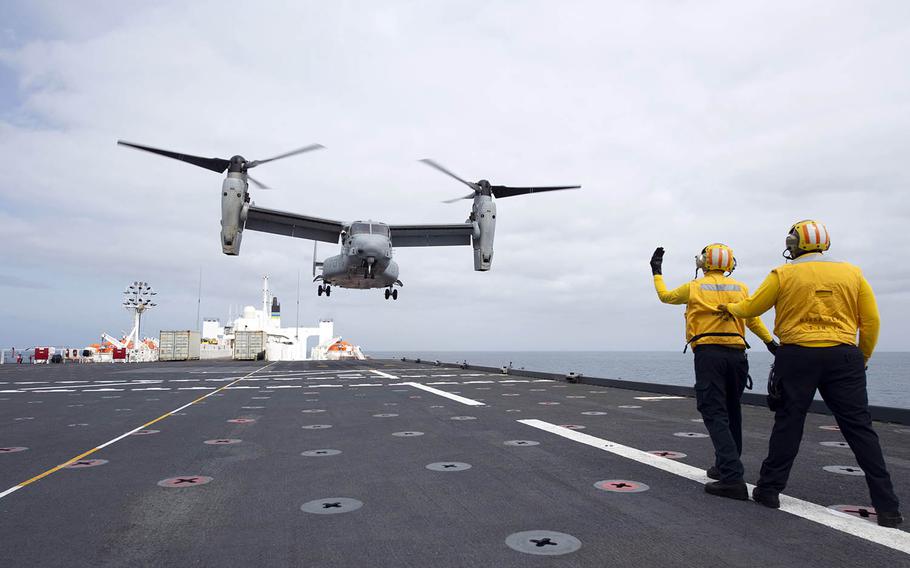 An MV-22B Osprey takes off from the hospital ship USNS Mercy in waters off Southern California, April 14, 2021. (Luke Cunningham/U.S. Navy)

An Osprey has made the tiltrotor aircraft’s first-ever landing on a Navy hospital ship, an important step in an effort to increase the speed in which patients and crucial supplies can be brought aboard.

The April 14 landing on the USNS Mercy, whose flight deck underwent major structural work over the past several months to accommodate larger aircraft, took place off Southern California, the Navy said in a news release Monday.

The ship is the midst of compatibility tests with variants of the V-22 Osprey and the MH-60 Seahawk, the Navy said.

Ospreys possess rotors that tilt one direction to allow vertical takeoff and landing and another to serve as propellers as on fixed-wing aircraft.

The aircraft and beefier flight deck are expected to increase flight operations and “allow critical patients a quicker route to the ship for treatment” as compared to “a slower boat ride from one of the ship’s tender boats,” the Navy said.

The Navy’s Military Sealift Command operates two hospital ships, the San Diego-based Mercy and the USNS Comfort, which is homeported in Norfolk, Va.

Mercy was deployed to Los Angeles for almost two months in spring 2020 to provide hospital beds for coronavirus patients, though the ship took in fewer than 100 patients during that operation.

Seven months of maintenance work in Portland, Ore., expanded and reinforced Mercy’s deck to handle the size, weight and heat of Ospreys and larger helicopters, the Navy said. Work was also done on the ship’s propulsion system intended to extend its service life to 2036.

The Navy had announced in 2018 plans to retire one of the hospital ships due to high upkeep costs, but the service dropped the plan after an uproar from U.S. lawmakers.

The Mercy was built as a commercial oil tanker in 1975 and became a Navy hospital ship in 1986.

It has been central to Pacific Fleet’s annual Pacific Partnership, a deployment aimed at improving cooperation among the region’s military forces, governments and humanitarian response organizations in preparation for natural disasters such as typhoons and tsunamis.