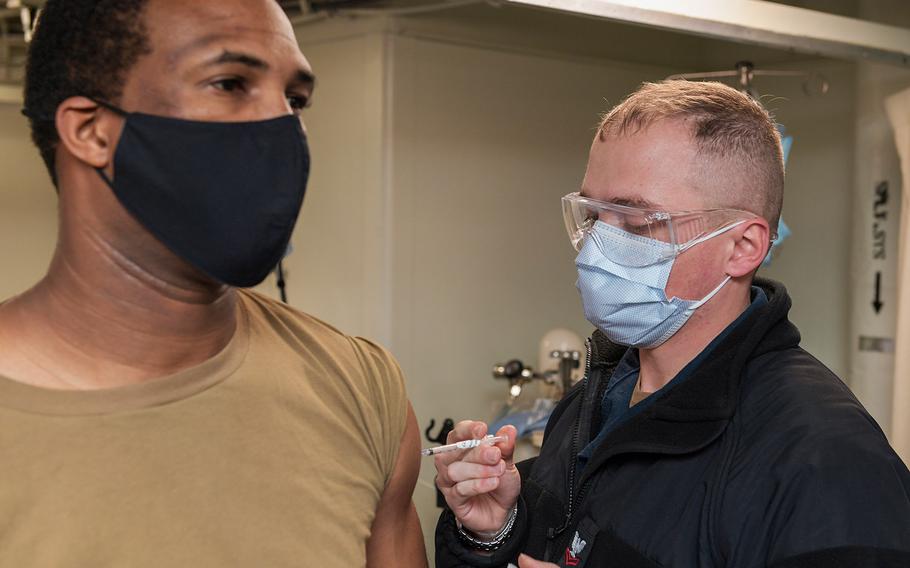 In a January 11, 2021 photo, a sailor on board the amphibious transport dock ship USS San Antonio receives the coronavirus vaccine. (Jacob Milham/U.S. Navy)

The Defense Department has fully vaccinated about 147,000 of its troops across the force, including active-duty, National Guard and reserves, Robert Salesses, the Pentagon’s homeland defense chief, told the House Armed Services Committee on Wednesday. Another roughly 212,000 service members have received their first of two doses of the vaccine, he said.

Pentagon officials in recent weeks had declined to provide information about the number of troops vaccinated or an estimate of how many have declined the vaccination. Salesses provided the numbers at the request of Rep. Mike Rogers of Alabama, the committee’s top Republican.

“We believe, of course, the vaccine is the right thing to do,” Taliaferro said. “It's clearly safe for service members, and we need to continue to educate our force about its safety and ensure leadership is involved in the discussion of the benefits of these vaccines.”

However, the general said that because the vaccines manufactured by medical giants Pfizer and Moderna have only been authorized by the U.S. Food and Drug Administration on an emergency basis, the Pentagon cannot mandate its personnel accept the vaccine, as it does other inoculations.

In all, the Pentagon has conducted 916,575 injections through Wednesday throughout its community, a number that includes service members, their family members, department civilians and contractors, Salesses said. It has focused primarily on inoculating front-line health care workers and so-called Tier 1 troops, focused on the nation’s most strategically vital missions, he said.

All service members who want to be vaccinated should be able to get their shots by late July or August, Taliaferro said.

Meanwhile, the Defense Department is ramping up its support to the broader effort to inoculate the U.S. civilian population. The Federal Emergency Management Agency has requested up to 10,000 troops to support up to 100 mass-vaccination sites that it plans to set up throughout the country. By next week, more than 700 active-duty troops will have deployed to support vaccine locations in California, Texas and New York. Salesses said the Defense Department would continue to provide additional troops, vowing it would “move further and faster to help end the [coronavirus] pandemic.”

Nordhaus expected those deployments to continue through at least the spring, he told House lawmakers.

“We’ll continue to see states utilize guardsmen to get after these vaccination efforts,” he said.