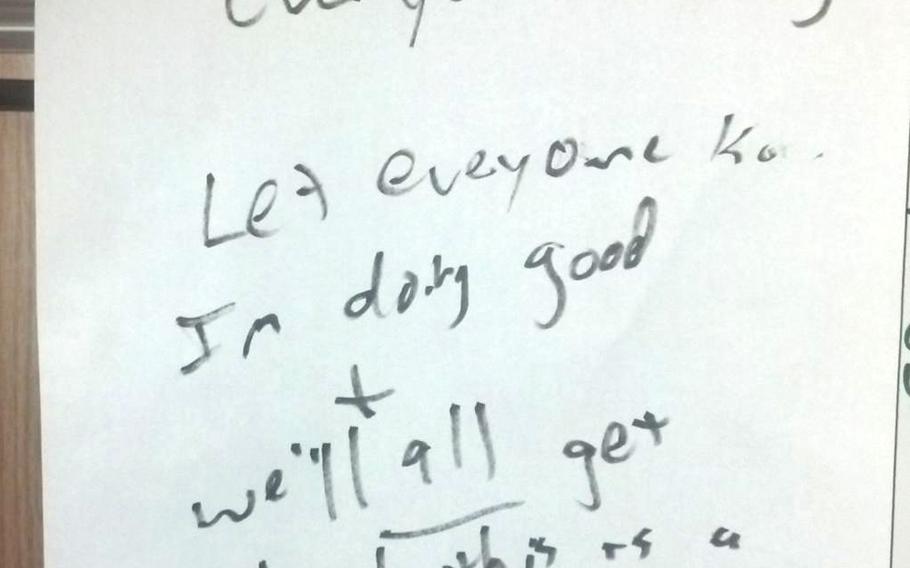 Maj. Patrick Miller wrote this note to his commander in between surgeries, when a breathing tube made it impossible for him to speak. Miller was shot on April 2, 2014, at Fort Hood, Texas, by Spc. Ivan Lopez. (Courtesy of Maj. Patrick Miller) 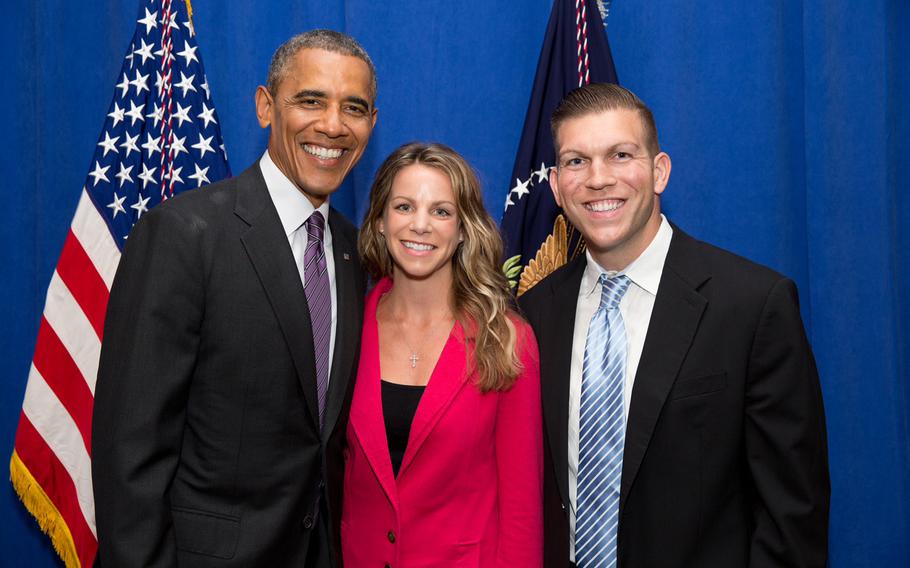 Maj. Patrick Miller and his wife, Ashley, met President Barack Obama a few months after Miller was shot by Spc. Ivan Lopez at Fort Hood, Texas, on April 2, 2014. Miller was still in the hospital when Obama traveled to Texas for a memorial service after the shooting. (Courtesy of Maj. Patrick Miller) Maj. Patrick Miller, who was shot by Army Spc. Ivan Lopez at Fort Hood, Texas, in April 2014, meets Hall of Fame quarterback Jim Kelly in this undated photo provided by Miller. Miller says he has almost fully recovered from the shooting, and he ran a half marathon in October. (Courtesy of Maj. Patrick Miller) Maj. Patrick Miller, shown with his wife, Ashley, was shot on April 2, 2014, at Fort Hood, Texas. Miller was in his office at the 1st Medical Brigade building when he heard gunshots and went into the hallway in an attempt to help others. (Courtesy of Maj. Patrick Miller)

The last soldier to be shot by Spc. Ivan Lopez before the Fort Hood shooter took his own life said he hopes the release of the Army’s investigation report on the incident can help victims and families move forward.

“If this can bring some kind of closure to [the victims and their families], then that’s great,” Maj. Patrick Miller told Stars and Stripes.

The report, released Friday, concludes that there were “no clear warning signs” and that the April 2, 2014, shooting was not preventable.

Miller, who was shot in the stomach but is now “close to 100 percent,” said the situation is scary because it was so unpredictable.

“I think we do a really good job of recognizing soldiers with PTSD,” of offering help, and of looking out for one another, Miller said. But even with the stressors Lopez was experiencing, he said, “how can you predict that somebody’s going to do that?”

After learning on the morning of April 2 that a leave request might not be approved, Lopez went home and got his .45-caliber Smith & Wesson pistol, according to the report. He returned to Fort Hood and argued with superiors about the leave request, then went outside and tried to make a few calls before he returned and began shooting.

Lopez drove to various locations on base, shooting even while he was driving, killing three soldiers and injuring a dozen others before turning the gun on himself.

Miller was working in the 1st Medical Brigade building that afternoon, catching up on emails, when he heard gunshots.

“I just remember how quiet it got,” Miller said. “We know what that sound is … but we aren’t accustomed to hearing it inside.”

Someone asked whether those were gunshots, and then the soldiers heard doors slamming and people running. Miller said he ran from his office out into the larger office, where about 10 soldiers were working, and said, “Everybody get down, hide.”

Then, he went out into the hallway.

“It’s kind of a fight or flight; you’re not really thinking,” he said of the few seconds after hearing the gunshots. He wanted to do something to help, he said, and when he looked down the hall, he saw a specialist he didn’t know walking toward him.

Miller says he yelled, “Dude, what are you doing? Get out of the hallway!” and the specialist — Lopez — looked up and started running toward him, he said.

“I thought he wanted to come into my office for protection,” Miller said.

He didn’t see the gun until a split second before Lopez shot him in the stomach.

Miller said his ears were ringing and he was in disbelief, but as Lopez fumbled while trying to reload his gun, Miller pushed him as hard as he could against the wall, closed and locked the door and ran to another door to close it.

As he was running, he called 911 and applied pressure to his wound.

“I didn’t know how long I was going to live,” Miller said. “If you’re hit in the trunk, in the core, it’s scary. There’s no exit wound.”

But he wanted to make sure he locked the other door first, he said. Then he grabbed the soldiers in the office and pulled them into his office so they’d be behind two locked doors. He passed the 911 call off to another soldier and used his gym towel to apply pressure to his stomach.

Miller still felt he was going to die and thought, “what a crappy way to go,” as he lay on the floor of his office for about half an hour. But then, he figured if he could still breathe and understand what was going on, he would likely survive.

He said he thought, “I’m going to frickin’ live, but I need to get out of this office and get to the hospital.”

No ambulances could go to the site because authorities weren’t yet sure whether Lopez was dead, so Miller and the other soldiers opened a window and yelled to a military police officer outside. He was getting a little lightheaded, and the injury was starting to hurt as he crawled through the office window, he said. The police put him in the back of a pickup truck and took him to the hospital.

Miller went through two surgeries in less than 24 hours, then spent two weeks in the intensive care unit with pneumonia and multiple infections, he said. He learned the details of the shooting from news reports and from friends and family, and he was upset that he couldn’t leave the hospital to see President Barack Obama speak at the memorial service for the fallen soldiers. He did get to meet Obama a few months later, though, he said, and he served as the grand marshal of a parade in his hometown of Allegany, N.Y.

Miller’s unit moved back into the building, but bulletproof glass was installed where there was previously an open window.

“We have to think about that stuff now,” he said.

Miller moved to Kansas in July for Command and General Staff College and will move to Hawaii for a new assignment after he graduates this summer.

Recovering from the gunshot wound was “the hardest thing I’ve ever had to do in my life,” he said, but he is now back to his normal workout routine and ran a half-marathon in October.

“I just have to keep getting stronger,” Miller said.