Odierno against resending US troops to Iraq, but doesn't rule out option 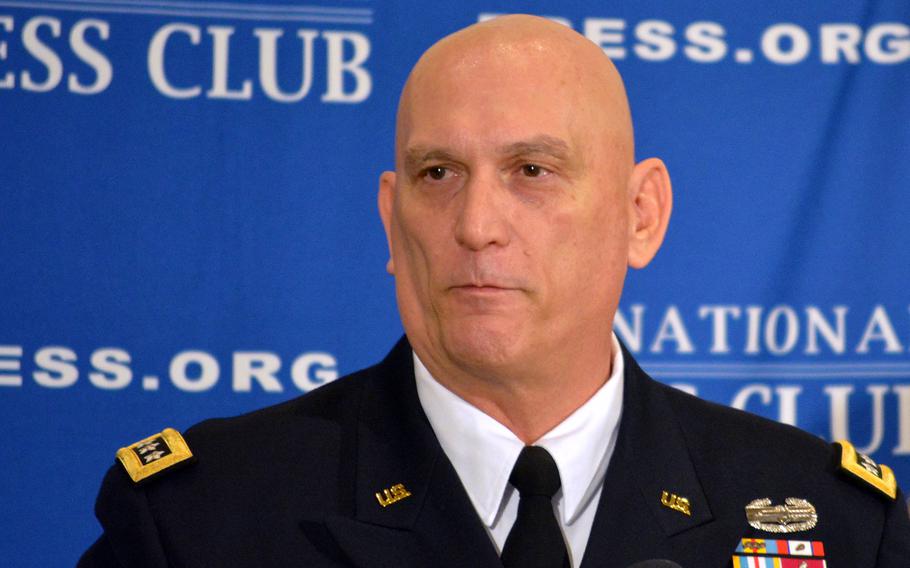 WASHINGTON — The top U.S. Army general who commanded troops during the invasion in Iraq lamented Tuesday the recapturing of two key Iraqi cities by al-Qaida linked militants and defended the U.S. withdrawal, but left the door open for a possible return of U.S. troops.

“It’s disappointed all of us to see the deterioration of security inside Iraq,” said Gen. Ray Odierno, the Army’s chief of staff, speaking at the National Press Club in Washington, D.C. The U.S. should use diplomacy to help Iraq regain control of its political process and work with its army on counterinsurgency against rebel factions, he said, instead of sending in American troops. But he didn’t rule out that option.

“I think it’s time for them to step up and see what they can do,” he said. “We have to just wait to see ... if it becomes part of our national security interest to put people on the ground.”

Two days earlier, Secretary of State John F. Kerry clearly rejected the notion of re-engagement: “This is a fight that belongs to the Iraqis.”

Iraq occupies a strategic location in the Middle East and maintaining a strong partnership with the country is a key goal as the United States seeks to maintain stability in the region.

Odierno’s comments come as the Islamic State of Iraq and Syria has emerged as one of strongest rebel units in Iraq. The militants recently gained control of Fallujah and part of Ramadi, where U.S. troops saw the heaviest fighting during the Iraq War.

Ninety five U.S. troops were killed in combat during the second battle of Fallujah at the end of 2004, according to the U.S. Marine Corps.

Odierno said it was difficult to look back on the sacrifices made by Americans, but stressed that servicemembers accomplished their mission there.

“I believe we left it in a way that enabled them to move forward. We removed a ruthless dictator,” he said.

When U.S. troops left Iraq in 2011, “their economy was growing … they had a political system in place that appeared to be working. But since those times, that political process has begun to deteriorate.”

Odierno said it was “incredibly difficult” to deal with the lives that were lost.

“I can never explain properly to anybody when somebody loses their life,” Odierno said. “But I do know that in each and every one of those cases, they raised [their hand] and volunteered to be in the Army and they were proud to do this mission, and many of them died doing the things they wanted to do.”