Obstacles remain in battle against ISIS, other terrorist threats 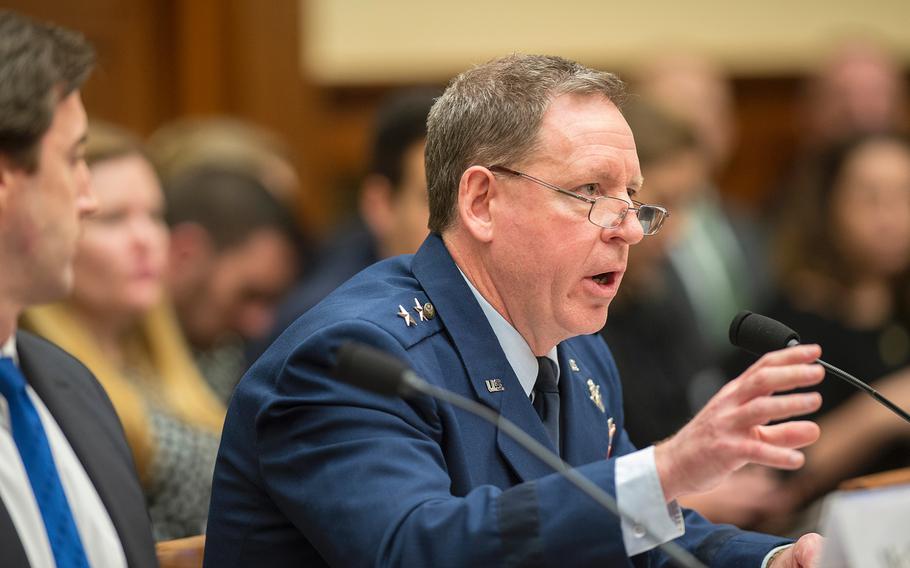 The Pentagon's Vice Director of Operations Maj. Gen. James Hecker testifies before the House Armed Services Committee during a hearing on Capitol Hill in Washington on Wednesday, Feb. 6, 2019. (Carlos Bongioanni/Stars and Stripes)

The Pentagon's Vice Director of Operations Maj. Gen. James Hecker testifies before the House Armed Services Committee during a hearing on Capitol Hill in Washington on Wednesday, Feb. 6, 2019. (Carlos Bongioanni/Stars and Stripes) 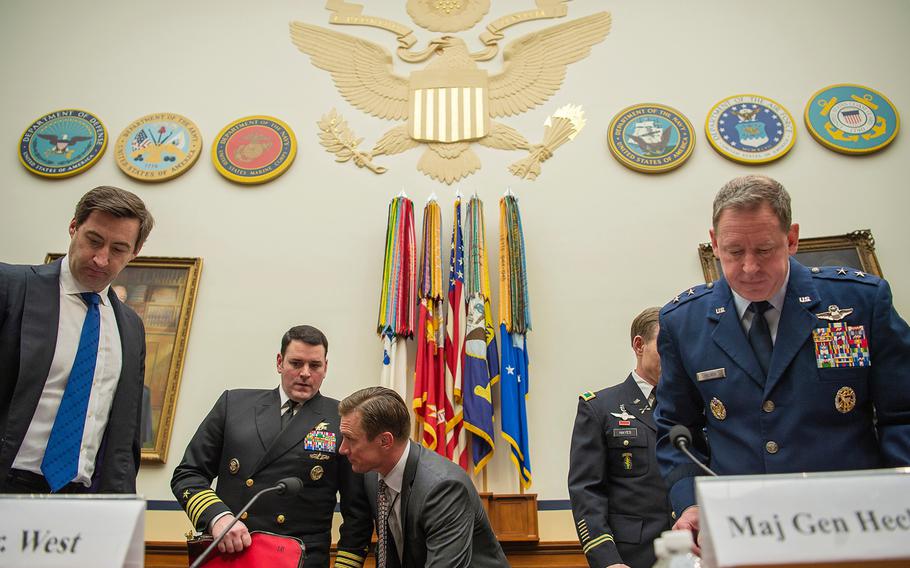 Assistant Secretary of Defense for Special Operations Owen West and the Pentagon's Vice Director of Operations Maj. Gen. James Hecker arrive prior to the start of a House Armed Services Committee hearing on Capitol Hill in Washington on Wednesday, Feb. 6, 2019. (Carlos Bongioanni/Stars and Stripes) 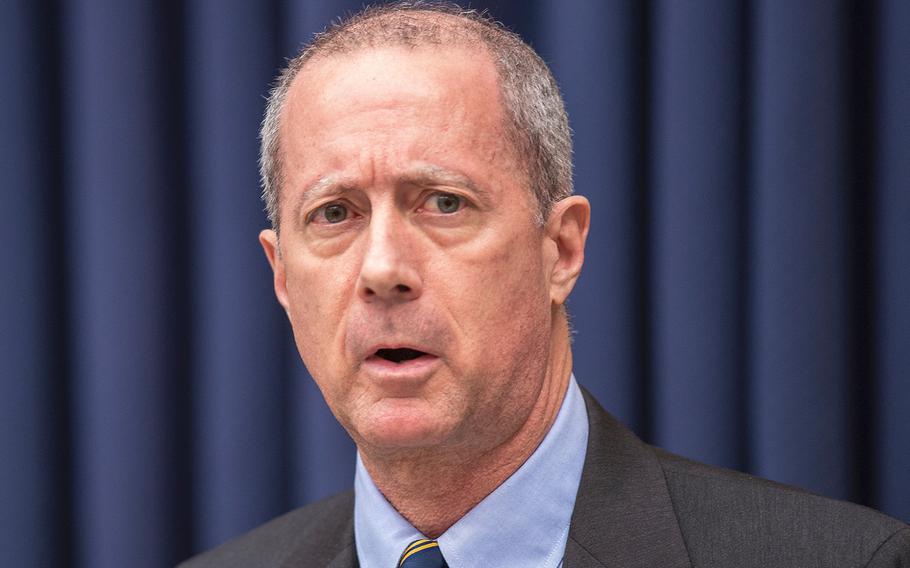 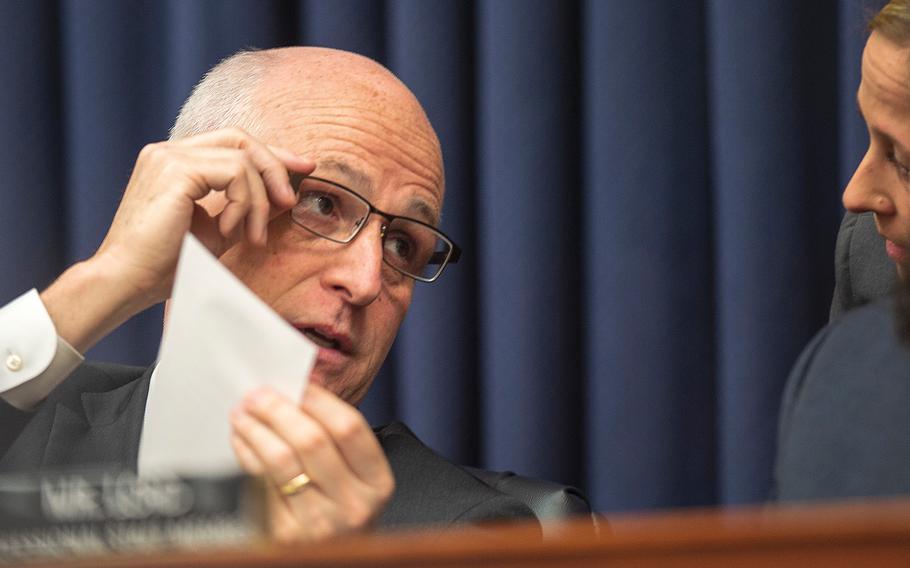 Chairman of the House Armed Services Committee Rep. Adam Smith, D-Wash., confers with aides about a note during a hearing on Capitol Hill in Washington on Wednesday, Feb. 6, 2019. Smith expressed concern that special operations forces may be getting stretched thin. “Certainly their tempo is high... Are we asking too much of them?" (Carlos Bongioanni/Stars and Stripes)

WASHINGTON — Two top Pentagon officials told a panel of House lawmakers Wednesday that the Islamic State and other terrorist groups have been dealt a series of defeats, yet plenty of challenges remain to fending off future threats.

The comments, which were made before a House Armed Services Committee hearing focused on counterterrorism, come as the military struggles with abrupt plans to drawdown of U.S. troops in Syria and Afghanistan.

Owen West, assistant secretary of defense for special operations and low-intensity conflict, and Air Force Maj. Gen. James Hecker, vice director for operations from the joint staff, said they are still trying to figure out a precise plan for fighting remnants of ISIS.

“I think there is a serious risk if we do not keep the pressure on in both Syria and Iraq, and I realize the concern is if we move our forces out of Syria that that may take some pressure off of the ISIS forces in Syria,” Hecker said. “So, our mission is to try to figure out how to keep the pressure on without any boots on the ground.”

In one of the hearing’s more dramatic moments, West was asked if he disagreed with former Defense Secretary Jim Mattis’ push back against President Donald Trump’s decision to abruptly withdraw troops from Syria.

In December, Trump stunned Capitol Hill and the Pentagon with his decision to withdraw the roughly 2,000 U.S. troops fighting the Islamic State in Syria within 30 days.

Since the Dec. 19 announcement, Mattis resigned and was replaced by his then-deputy Patrick Shanahan in an acting capacity.

Wednesday’s hearing comes a day after a top military general told a Senate panel that ISIS will be defeated in Syria and the terrorist group will be unable resurge after U.S. troops withdraw from the country.

Army Gen. Joseph Votel, commander of U.S. Central Command, confirmed Tuesday that he learned of the Syria withdrawal decision from Trump’s Dec. 19 announcement and he was not consulted.

Votel also said there maybe 20,000 to 30,000 ISIS fighters left in the region, though they are mostly underground or dispersed. He said there is one ISIS stronghold of about 1,000 fighters remaining within a 20-square-mile area near the southern Euphrates River and the Iraqi border.

A government watchdog report released Monday suggested ISIS in Syria could resurge within six to 12 months and regain territory in the Middle Euphrates River Valley without sustained counterterrorism pressure. Of the territories ISIS controlled two years ago, more than 99 percent has been returned to Syrians, military officials have said.

Trump spoke at the State Department on Wednesday before a meeting of foreign ministers from the 79-member, U.S.-led anti-ISIS coalition. He said the U.S. military, the coalition partners and the Syrian Democratic Forces “have liberated virtually all of the territory previously held by ISIS in Syria and Iraq.”

“It should be formally announced some time probably next week that we will have 100 percent of the caliphate,” the president said. “But I want to wait for the official word. I don’t want to say it too early.”

During Wednesday’s hearing, Rep. Adam Smith, chairman of the House Armed Services Committee, raised concerns that one of the dominant aspects to combating terrorist groups has been an significant increase in the use of special operations forces. Smith said their numbers have doubled since the 9/11 terrorist attacks.

“Certainly their tempo is high, they have been doing very dangerous missions for a very long time,” Smith said. “Are we asking too much of them? Has it strained the force to the point where it is causing problems? Are there things we can do to mitigate that? How do we handle the fact that so much is being asked of our special forces in light of the post-9/11 world?”

Texas Rep. Mac Thornberry, the ranking Republican on the panel, said a recent rash of deaths serves as a reminder of the cost of the country’s longest war. Thornberry recently attended the memorial service for Army Sgt. Cameron A. Meddock, 26, who died last month after he was wounded by small arms fire in the Jawad district of Afghanistan’s Badhis province.

“We can never forget …the human cost that goes into keeping us safe and free,” Thornberry said.

Smith also raised concerns Wednesday that there are disconnects between the National Defense Strategy, which focuses on great power rivalries with Russia and China, and the National Strategy for Counterterrorism, which addresses all global threats.

Smith has said he is concerned the Trump administration doesn’t have a meaningful plan to confront terrorism. And with an increase of strikes, such as bombings and raids, on terrorist targets, it’s not clear if that higher tempo has brought positive results.

“Why? And what has it accomplished? Also, what is the downside?” Smith asked.

Stars and Stripes reporter Caitlin Kenney contributed to this story.