Obama at West Point: As threat shifts from Afghanistan, so must US power 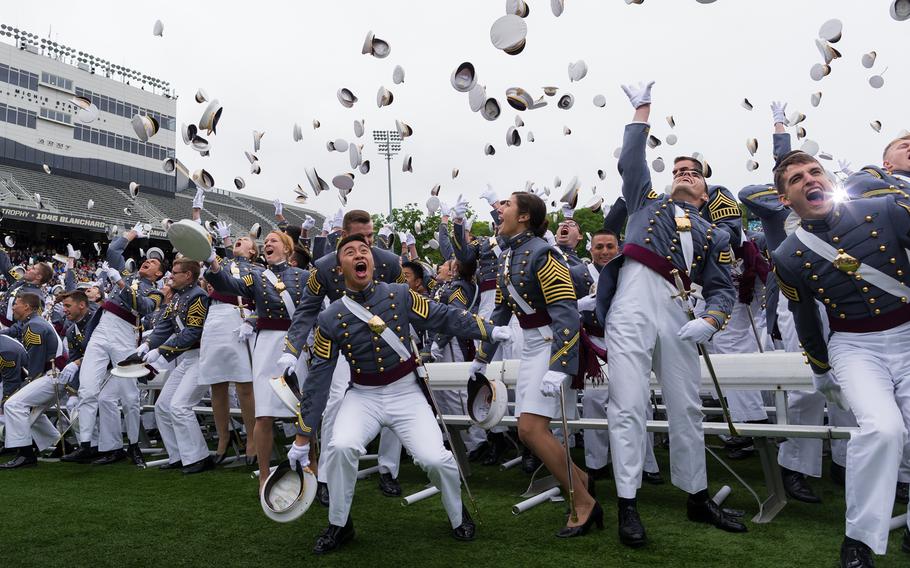 Newly commissioned second lieutenants participate in the traditional hat toss at the end of the 2014 commencement ceremony at the U.S. Military Academy at West Point, N.Y., May 28, 2014. (Christopher Fincham/U.S. Army)

Newly commissioned second lieutenants participate in the traditional hat toss at the end of the 2014 commencement ceremony at the U.S. Military Academy at West Point, N.Y., May 28, 2014. (Christopher Fincham/U.S. Army) 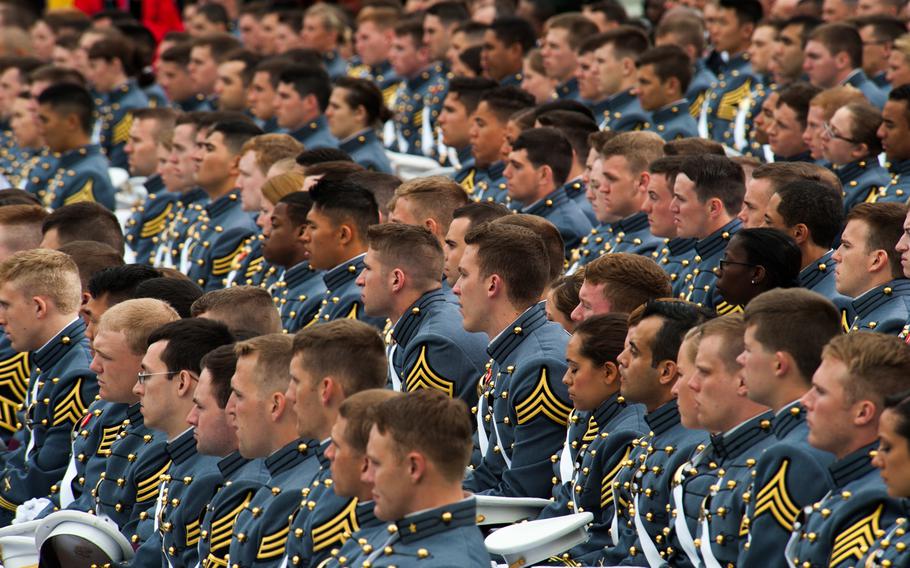 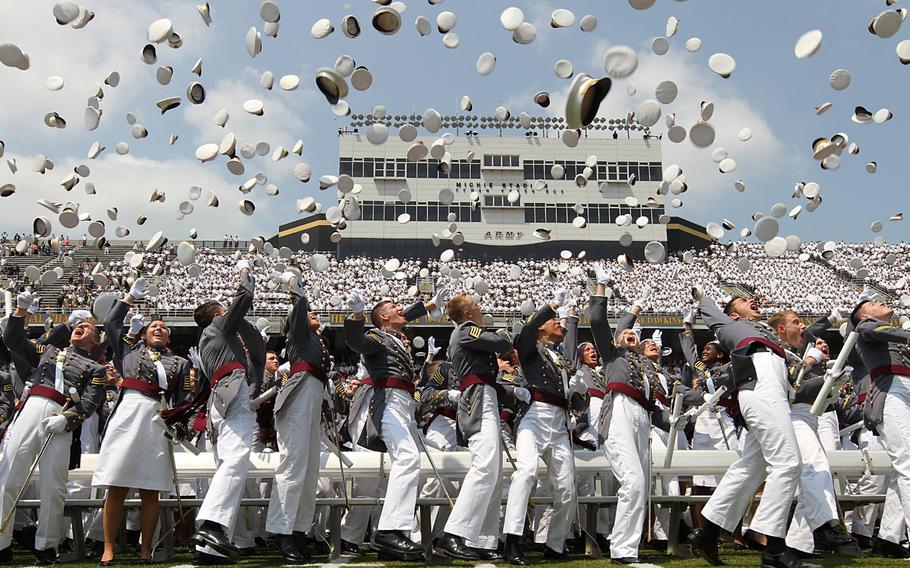 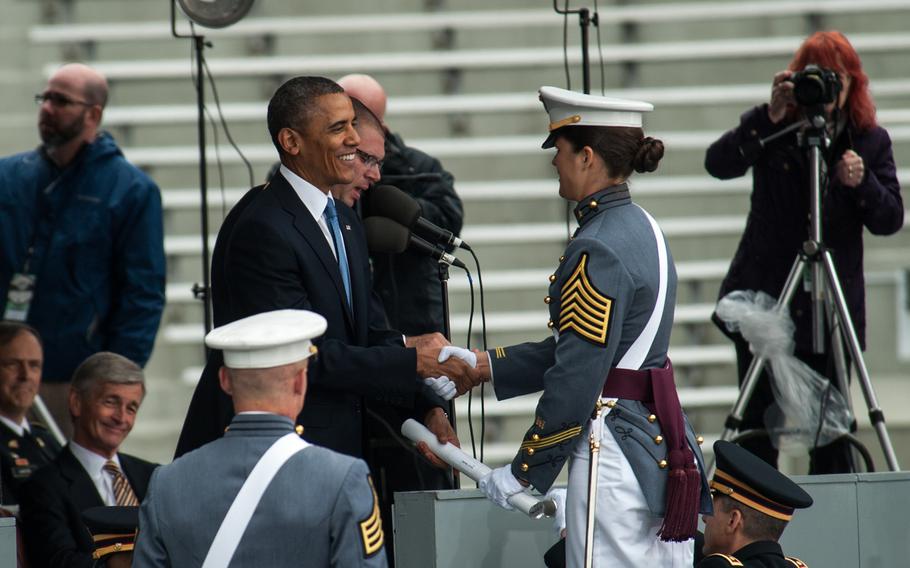 President Barack H. Obama shakes the hand of a graduating West Point Cadet at Michie Stadium, West Point, N.Y., May 28, 2014. President Obama was addressing the graduating class of 2014 and spoke about his vision for the future. (Mikki L. Sprenkle/U.S. Army) 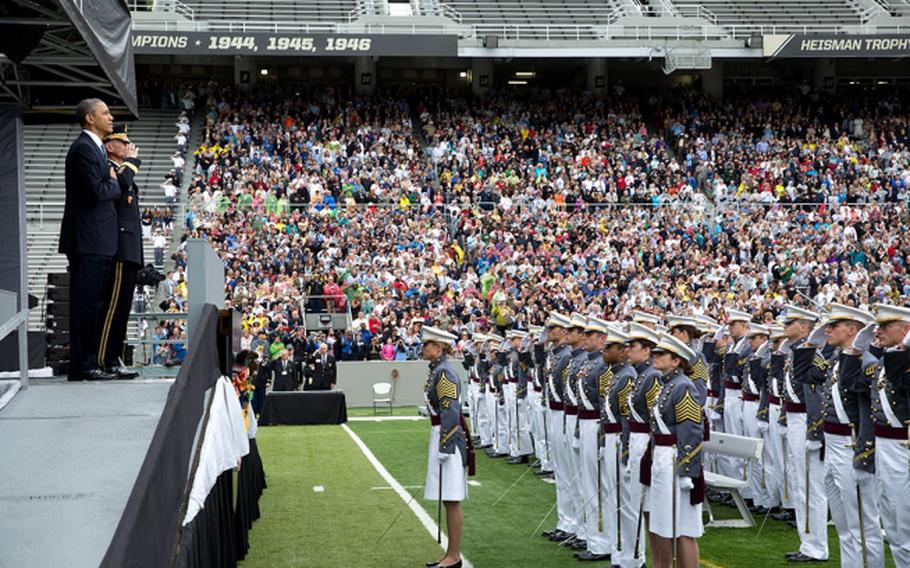 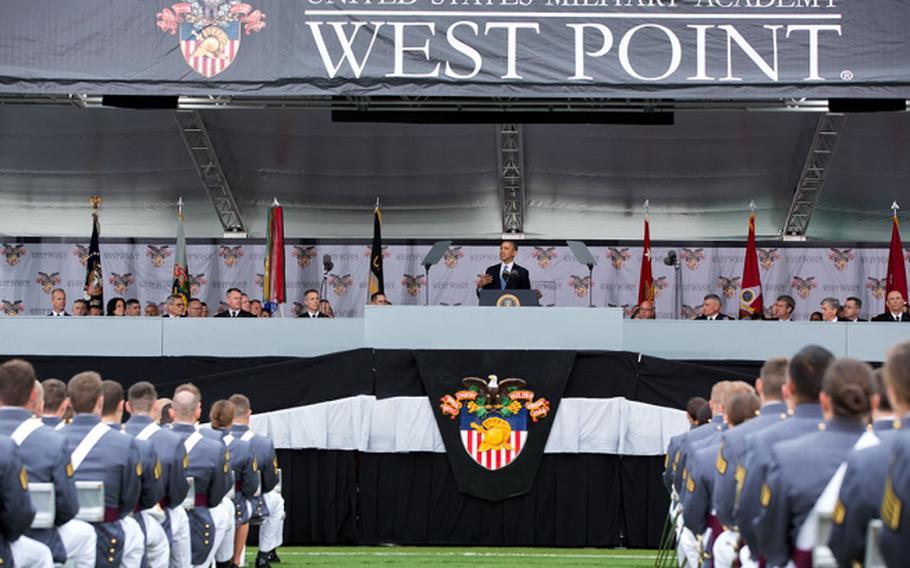 WASHINGTON — More than 12 years after the 9/11 terrorist attacks made al-Qaida operatives in Afghanistan and Pakistan the No. 1 target, the U.S. plans to shift its counterterrorism resources to other regions, President Barack Obama said Wednesday during a commencement speech at West Point.

With so-called “core al-Qaida” severely degraded and the end of the U.S. combat mission in Afghanistan in sight, administration officials see other threats as a higher priority.

“Today’s principal threat no longer comes from a centralized al-Qaida leadership. Instead, it comes from decentralized al-Qaida affiliates and extremists,” Obama said. “This lessens the possibility of large-scale 9/11-style attacks against the homeland, but it heightens the danger of U.S. personnel overseas being attacked, as we saw in Benghazi … So we have to develop a strategy that matches this diffuse threat; one that expands our reach without sending forces that stretch our military thin, or stir up local resentments … Our reduced presence [in Afghanistan] allows us to more effectively address emerging threats in the Middle East and North Africa.”

Obama noted that this year’s graduating cadets would be the first in more than a decade that might not deploy to a warzone like Afghanistan.

In a time of budget constraints and war-weariness among the American people, Obama wants to shift more of the security burden to America’s allies.

“We need partners to fight terrorists alongside us,” Obama said. “A strategy that involves invading every country that harbors terrorist networks is naïve and unsustainable. I believe we must shift our counterterrorism strategy — drawing on the successes and shortcomings of our experience in Iraq and Afghanistan — to more effectively partner with countries where terrorist networks seek a foothold.”

Obama called on Congress to establish a new $5 billion Counterterrorism Partnerships Fund to help train, build capacity, and assist partners who are fighting terrorists, in places such as Yemen, Somalia, Mali and Libya. The administration will also seek an additional $5 billion within the Fiscal 2015 Overseas Contingency Operations funding request — which is normally used to support wartime operations like the one in Afghanistan — for the Defense Department’s counterterrorism activities, such as intelligence, surveillance, and reconnaissance missions, and special operations, according to a White House fact sheet.

Reflecting the new counterterrorism outsourcing strategy, Obama in his speech announced his intention to “ramp up support” for the moderate opposition that is battling both the Assad regime and Islamic extremists in Syria. He did not specify whether the increased support would include additional arms, training, intelligence sharing, or other assistance. A senior administration official, speaking on to reporters on the condition of anonymity, said the White House is interested in providing vetted members of the Syrian opposition training and equipment, but not putting U.S. boots on the ground.

“We’re talking specifically about assistance to the opposition,” the official said. “We’re not talking about activities within Syria by the United States military. That is not something that we’re contemplating.”

Obama said that his administration would also provide more assistance Jordan, Lebanon, Turkey and Iraq as they deal with Syrian refugees and transnational militants traveling to and from Syria.

Some lawmakers say Obama dithered when it came to in Syria.

“While there were options for helping the once mostly moderate opposition forces, in many places extremist rebels have now taken control of the front lines. Therefore President Obama’s decision to wait until now to address the crisis will affect not only our national but homeland security for years to come,” House Homeland Security Committee chairman Michael McCaul, R-Texas, said in a press release after Obama’s speech.

“I welcome the new focus on Syria. This will require sustained U.S. engagement, which has been absent to date, but that this national security threat demands. Like elsewhere around the globe, the President has been late in responding to this crisis,” Rep. Ed Royce, R-Calif., the chairman of the House Foreign Affairs Committee, said in a press release.

Obama said there will still be cases where the U.S. will take unilateral military action against terrorists, but with restrictions.

“The partnership I’ve described does not eliminate the need to take direct action when necessary to protect ourselves,” Obama said. “[But we should be]taking strikes only when we face a continuing, imminent threat, and only where there is near certainty of no civilian casualties. For our actions should meet a simple test: We must not create more enemies than we take off the battlefield.”