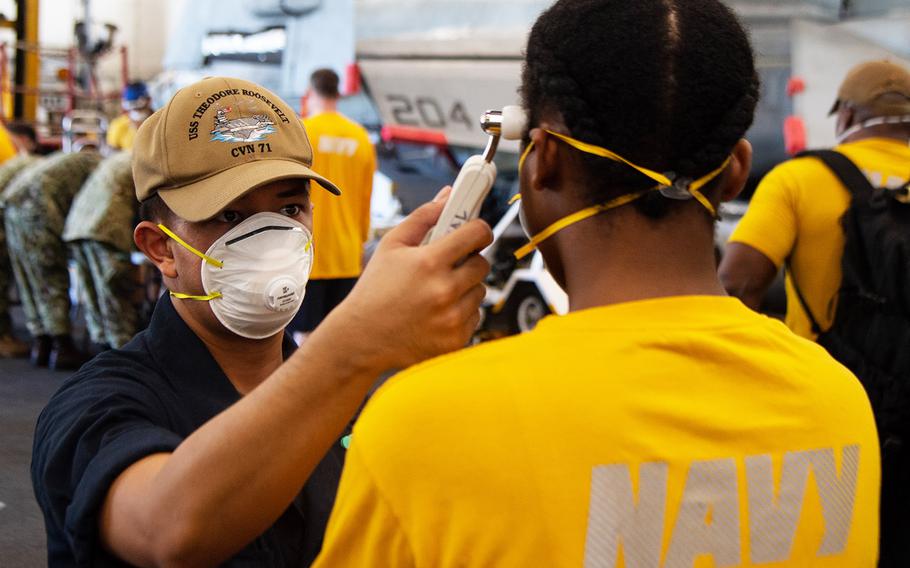 WASHINGTON — The USS Theodore Roosevelt has nine sailors now hospitalized with coronavirus symptoms, the Navy announced Tuesday, as positive cases of the illness increased to more than 700 among the crew.

However, none of the sailors being treated at the U.S. Naval Hospital Guam is in the intensive care unit.

As of Tuesday, 94% of the Roosevelt’s crew has been tested for the coronavirus as the ship nears a month since it docked in Guam due to the outbreak aboard the ship. About 710 sailors have tested positive, with 42 sailors now recovered from the virus, according to the Navy. About 3,872 crewmembers have received a negative test result.

Overall, the Navy said there are 999 current cases of the virus within its military personnel as of Tuesday. The service has had a total of 1,252 coronavirus cases among its sailors, including Roosevelt crewmember Chief Petty Officer Charles Robert Thacker Jr., 41, who died April 13.

The Roosevelt has been in port in Guam since March 27 after the outbreak aboard the nuclear-powered carrier forced the ship to divert from its scheduled deployment to the island.

The Roosevelt’s former commander, Capt. Brett Crozier, raised alarms about the outbreak with an emailed letter to other Navy officers requesting assistance for his crew as they battled the virus. Crozier, who also contracted the virus, was fired April 2 by then acting Navy Secretary Thomas Modly two days after the letter was leaked to the media.

The results of a Navy investigation into Crozier and his decision to email a letter is pending.

Defense Secretary Mark Esper has said the investigation was completed about two weeks ago. Adm. Mike Gilday, the chief of naval operations, is reviewing the results and “no final decisions have been made,” according to his spokesman, Cmdr. Nate Christensen.